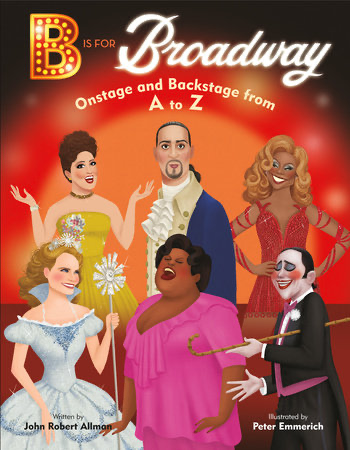 Random House Children’s Books and The Actors Fund announced that they have partnered to release B Is For Broadway: Onstage and Backstage from A to Z. The book is the follow-up to the hit debut picture book A Is for Audra, which has had Broadway fans young and old clamoring to add it to their collections. Written by John Robert Allman with illustrations by Peter Emmerich, a portion of the book’s proceeds will be donated to The Actors Fund.

Joseph P. Benincasa, President & CEO of The Actors Funds says of the partnership: “We are honored that a portion of the proceeds of author John Robert Allman and illustrator Peter Emmerich’s B is For Broadway will go to support our programs. The Actors Fund is proud to be at the forefront of helping everyone in the entertainment community with emergency financial assistance and supportive services, and we’re grateful that this wonderful new work will help those in need in our performing arts community.”

Step into the spotlight and celebrate a cavalcade of Broadway legends! Start with A for audition with the iconic lineup from A Chorus Line, then peek behind B to see the backstage buzz, and dance along with C for choreographers.

Children and grown-ups alike can spot beloved stars and creators from today and yesterday, such as Lin-Manuel Miranda, Patti LuPone, Irving Berlin, Jennifer Holliday, and Billy Porter. Readers will also see famous New York theaters, beloved shows such as Rent and Les Misérables, and the crew, stylists, and technicians who are vital to each performance. It’s a celebration of the American stage that no fan will want to miss.

—Playbill “If A Is for Audra is a crash course in Diva Studies, [B Is for Broadway] is a syllabus for showbiz.”

—Kirkus Reviews “Twenty-six letters of the alphabet barely contain the excitement and glamour that is Broadway…Young readers smitten with the stage will love the many views onstage and backstage…Take your seats. No tickets needed for this entertaining performance.”

—Bebe Neuwirth, Tony and Emmy Award–winning dancer, singer, actress (Sweet Charity, Chicago, Cheers) and Vice Chair of The Actors Fund “B Is for Broadway celebrates the entire Broadway community—backstage, onstage, everyone!—who works in our performing arts and entertainment community. I’m honored to be a part of that beautiful community, and this lovely book.”

—Rosie O’donnell, Isabelle Stevenson Award recipient, three-time Tony Awards host, and Emmy winner “A must have for all Broadway lovers—B Is for Broadway—a book I am actually in!!! I am buying a dozen.”

—Kristin Chenoweth, Tony Award–winning actress (You’re a Good Man, Charlie Brown) “The illustrations—gorgeous. The rhymes—delicious. This book—a must-have! B is for Broadway and buy-it-now!”

—Ali Stroker, Tony Award–winning actress (Oklahoma!) “B Is for Broadway is a gorgeous children’s book that will introduce a young person to all the magic of theater!”

John Robert Allman(Author) lives in New York City, where he works in marketing for television and theater.  He is the author of A Is for Audra and B Is for Broadway and two picture books with the American Ballet Theatre, Boys Dance! and B Is for Ballet. John is a graduate of Northwestern University, New York University’s

Peter Emmerich (Illustrator) is the acclaimed illustrator of A Is for Audra and B Is for Broadway. He has worked with DreamWorks and the Walt Disney Company, for which he illustrated the U.S. Postal Service’s “Art of Disney” stamp series. Peter is a graduate of the Fashion Institute of Technology and lives in Illinois. He attended his first Broadway musical, Meet Me in St. Louis, while a student in high school. Visit him at emmerichillustration.com.

The Actors Fund is a national human services organization that fosters stability and resiliency, and provides a safety net for performing arts and entertainment professionals over their lifespan. Programs include social services and emergency financial assistance, health care and insurance counseling, housing, and secondary employment and training services. Visit actorsfund.org.

ElizaBeth TaylorDecember 23, 2021
Read More
Scroll for more
Tap
A Book To Look For: The Letters Of Oscar Hammerstein II
Forget Voting About Talent Now It Is All About Inclusion