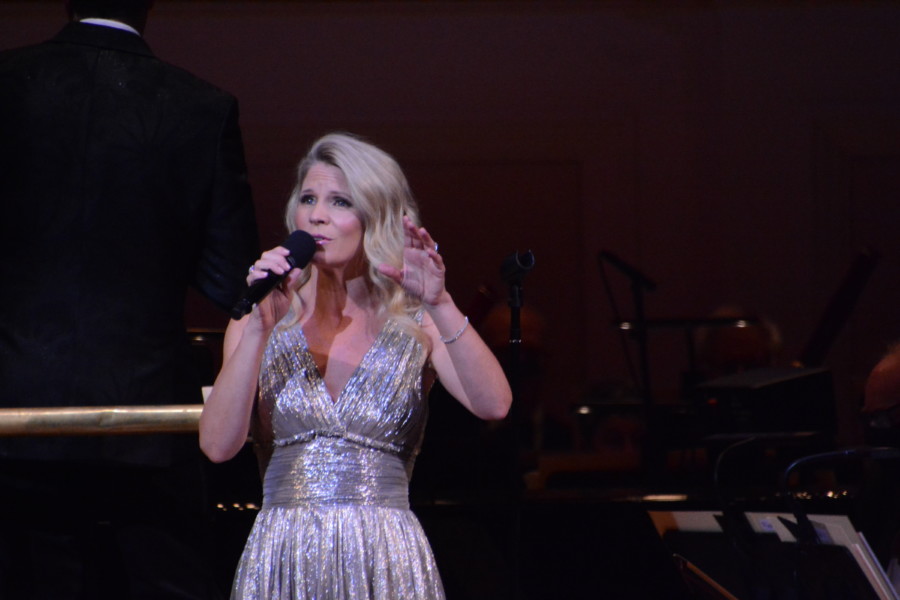 On December 17th, the first clash of the cymbals showed the audience at Carnegie Hall that after 22 months The New York Pops was back on stage and the 2021 holiday season was well on its way.

Earlier in the week Covid again reminded us that it had not yet been permanently put in the history books. While the Rockettes were forced to stop kicking, Hamilton stop rapping and Moulin Rouge stop lifting their skirts, The New York Pops showed that they still can can with the help of Kelli O’Hara. Laura Benanti was originally supposed to headline the Back for the Holidays celebration; but, she was in contact with a Covid positive individual earlier in the week and Kelli donned her holiday apparel to take her place.

Under the musical direction of Steven Reinecke, The New York Pops once again filled Carnegie Hall with holiday cheer with a wonderful overture. Kelli walked onto the stage in a beautiful red gown (which we find out later was lent to her by Ms Benanti) that transformed Ms O’Hara into a most beautiful Christmas tree topper. Singing a joyful “It’s the Most Wonderful Time of the Year,” Kelli showed us why she is one of Broadway’s leading ladies. Paying tribute to another leading lady of Broadway, Kelli honored Barbara Cook with her rendition of “Have Yourself a Merry Little Christmas.” She then reminded us of the true meaning of Christmas as she gave us “I Wonder as I Wander,” a Christian folk hymn dating from 1933.

Leaving the stage for her second of four costume changes, she left us alone with Mr Reineke and The Pops who took us on a wonderful “Sleigh Ride“. Despite the temperature outside that day reaching an unseasonably warm high 50’s; the magic of The Pops with the exciting orchestrations transported us onto a brisk ride through imagined snow with the real neighing sound of the leading horses. As an added bonus I was able to see how they were able to create the sound of the whip to make the sleigh go faster (and no horses were harmed in the playing of this song.)

“I Saw Three Ships,” is a traditional English carol dating back to the 17th Century. The meaning of the three ships is always in question: the three wise men following the Christmas star?, three ships bringing religious relics to Germany in the 12th Century or a reference to good prince Wenceslaus. All of those references bring to mind small wooden sailing ships but The Pops with their exciting arrangement by Matthew Jackfert brought to mind three very distinct ships ranging from a small fishing boat to a Cutty Sark to an aircraft carrier. From the image of great sailing vessels, The Pops next brought us the beautiful melodies of the Carol of the Bells.

Kelli returned to the stage in a slit Christmas green dress which allowed her to “get crazy” as she finished the first half of the show dancing and singing to “Man with the Bag,” But first she gave us “I’ll Be Home for Christmas” and “A Place Called Home” from Alan Menken and Lynn Ahrens’ A Christmas Carol. I was unfamiliar with this song as was Kelli, who admitted the same but has now put this in her playlist for the future. You could imagine a young 12 year old Scrooge singing this as old Scrooge and the Ghost of Christmas Past looks on.

After Intermission The Pops returned with “Jingle Bell Rock,” which was brought to lively heights with horns and an electric guitar.

Hanukkah came early this year from November 28 to December 6 and although all the candles on the city’s menorahs had been lit for over ten days, The Pops celebrated the holiday with the traditional “Mis Zeh Hidlik (Behold the Lights).” The English horn was the highlight of this arrangement played by a young lady whose name I sadly did not hear. From the quiet of the English horn Mr Reineke jazzed up the orchestra with I’ve Got My Love to Keep Me Warm which included short solos on the electric guitar, piano and trumpet.

Kelli O’Hara returned to the stage now in a glittering silver dress adorned with crystal by Oscar de la Renta. She now complimented her tree topper first dress as a shimmering piece of tinsel and sang “Winter Wonderland.” She followed that with another tribute to Barbara Cook, whom she sang with years earlier on the Carnegie Hall stage, with Ms Cook’s version of “The Christmas Song.”

Ms O’Hara welcomed her guest performer (who was originally Ms Benanti’s planned guest), Brandon Michael Nase. Mr Nase was not a stranger to Kelli as she had worked with him on his nonprofit organization Broadway for Racial Justice (BFRJ) that fights for racial justice and equity in the theater community. Not just an organizer, Mr Nase is also a talented singer who has performed in Cats, Showboat, and Evita; he shared his gift in a duet with Kelli from “White Christmas” and “Count Your Blessings (Instead of Sheep).”

Kelli exited, leaving the stage to Brandon who gleefully exclaimed that this was his Carnegie Hall debut which I’m sure made the words “a very special Christmas” even more meaningful as he sang them in Donny Hathaway’s “This Christmas. He should be proud of his first Carnegie Hall solo.

As Brandon left stage left Santa with his peppermint patterned masked elf entered stage right wishing us all a Merry Christmas” and taking Mr Reineke’s baton to conduct the Pops while dancing on the conductor’s platform.

Kelli entered as a vision of pure white snow in a crystal shining gown with a ruffled bottom. Ms O’Hara’s operatic voice truly came out as she sang “O Holy Night.” It is an amazing thing when one voice can be so strong and beautiful that an entire choir can be heard from that solo performer. With Mr Reineke’s conducting the glorious New York Pops, Carnegie Hall was transformed to all the grandeur and emotion of a Christmas service in St Peter’s Basilica in the Vatican.

Despite Ms O’Hara and Mr Reineke leaving the stage we knew the evening was not over and they soon returned with Mr Nase. Kelli and Brandon sang a duet of “Auld Lang Syne.”The song was a perfect way to end the evening as it is the traditional midnight song on New Year’s Eve. Even more poignant in 2021 as we look forward to a better 2022. Yes we do look back and want to leave the hardships that the past year…past 22 months… have presented us; but, it is also a song that makes us look forward to better times, healthier times, happier times and definitely more times with Ms O’Hara, Mr Nase, Mr Reineke and The New York Pops.