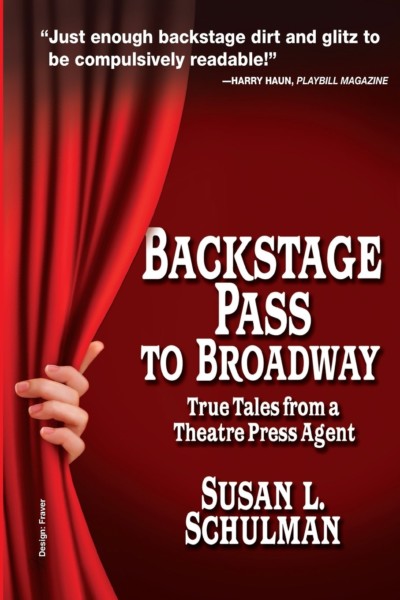 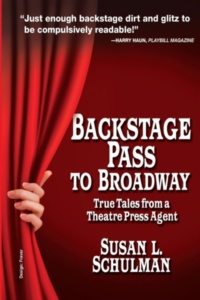 The first edition of BACKSTAGE PASS TO BROADWAY: True Tales of A Theatre Press Agent was published in September, 2013 and, within a month, was named one of Amazon’s 100 best-selling theatre books.  In this entertaining, dishy book, long-time theatre press agent Schulman shines the spotlight behind the show curtain, sharing true tales of her life in the theatre.  Susan L. Schulman has worked with some of Broadway’s most talented and creative people – sometimes behaving badly and often with astonishing grace – as they struggled to create theatre magic.

A New York City ‘theatre kid,’ Schulman waited outside Broadway stage doors, not for autographs, but to tell actors how their performance had enhanced her life.  After learning her craft from some of Broadway’s legendary press agents, she handled the publicity for many Broadway shows including Dream, Dancin’, Sly Fox, State Fair, Applause, Death of a Salesman, A Streetcar Named Desire, Scapino, Death and the Maiden and Requiem For A Heavyweight.  She shares her adventures working with Mary Martin, George C. Scott, Lauren Bacall, Yul Brynner, Robert Redford, David Merrick, Bob Fosse, Raul Julia, Zero Mostel, Vanessa Redgrave, Henry Winkler, Lesley Ann Warren, Katharine Hepburn, Glenn Close, Mike Nichols, Diana Ross, and many more.   Schulman has survived some spectacular theatrical train wrecks including the play that killed Zero Mostel; ‘Abominable Showman’ David Merrick’s last hurrah, and the fading film diva who sabotaged her own return to Broadway.  Schulman also explains what a theatrical press agent does, how she does it, and how theatre promotion has changed.

BACKSTAGE PASS TO BROADWAY is currently available in paperback and ebook at amazon.com.  The paperback is also available at www.backstagepasstobroadway.com as well as at Theatre Circle, 268 West 44th Street, NYC; The Drama Book Shop, 250 West 40th Street, NYC and at Byrd’s Books in Bethel, CT.

Suzanna BowlingOctober 20, 2022
Read More
Scroll for more
Tap
Meet The Playwrights of NY SummerFest: Harper Craven a Young Composer/Lyricist and Playwright Who Dreams of Having a Voice
The Boys in the Band Plays Special Midnight Performance for The Actors Fund