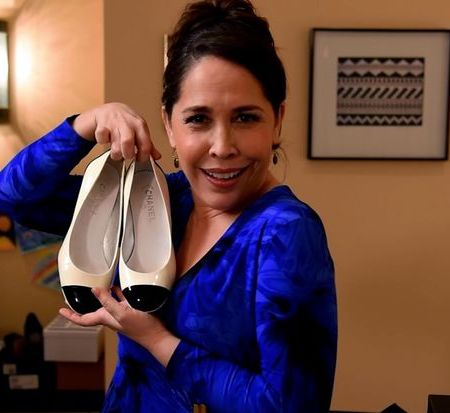 “Have you seen Mildred Pierce?” our heroine asks, or is asked by her friend, at a time of contemplation, and I must admit that I have not, well, not in its entirety. But when it is explained inside this well crafted one-person show about (and called) Bad Dates, the similarities sound and fit just about right. Like all those shoes carefully stacked around our leading lady and host, Haley Walker, a Texas divorcee who has found her perfect place in life, running a restaurant after moving to Manhattan with her daughter after a divorce, this simple yet wise virtual production of Theresa Rebeck’s 2003 comedy starring Andréa Burns unpacks a focus and sense of self just like Joan Crawford’s character in that famed film. And like that titular character, Haley doesn’t have much luck in the men department. We just hope that somewhere, revolving around her mother’s blind dates, her Romanian gangster restaurant owners, and the Bad Dates lined up with ridiculously sounding men, she will find herself a better Hollywood ending than Pierce does. Oh shoot, I hope I haven’t spoiled it.https://www.youtube.com/embed/KoOr_OoHbv4?version=3&rel=1&showsearch=0&showinfo=1&iv_load_policy=1&fs=1&hl=en&autohide=2&wmode=transparent

“Mildred knew what she wanted, and wasn’t too particular how she got it,” we are told in an old trailer I dug up on YouTube, and in a way, that same quality exists in Rebeck’s updated version of “Mildred“. One by one, we hear about the string of Bad Dates Haley goes on, dressing up for each one with an anxious nervous energy that is infectious, or undressing for some ‘close encounter of the odd kind’ chips and bedside chatter. The boxes and boxes of shoes litter the floor, like discarded metaphors, thrown with wild abandonment around the room.They are tried on and thrown off, almost as easily as the one-liners that gets tossed with ease at us, some hitting the mark, while others coming pretty darn close, but not hitting the target exactly. “These things hurt” she says, like getting your “foot struck in a bear trap“, but there she is, donning numerous outfits and pairs of shoes for her daughter Vera’s approval or disapproval before she gets it right (or all wrong). We are all on her side though, from the get-go, wanting her, and maybe ourselves, to get back into the saddle of romance and dating, while refusing to live life by the same old stereotypical gender-specific rules (even while wearing the highest of stiletto heels – “What is that about? You could stab someone with that heel!” That first date, the one that finally arrives after the longest of preambles, is most definitely not the prize of the night, although we should have known from the beginning, as this one is far too early in this overly long production for her to find the gift she is looking for right off the bat. It turns out he talks endlessly about cholesterol, and colon health, two topics that have never made any date I know exciting, or one that makes you long for a second one.

But it doesn’t scare her (or us) away, nor do any of the more obvious set-ups for disaster or failure in the following sequence of Bad Dates. The production from George Street Theater, streaming online until March 14th, finds infinite flavour in how all those different sparkly shoes fit. The start of the feast is slow but endearing, the middle half; flirty, fun, and engaging, and the end; surprising and sweet in its simple turning of the heel. It is Burns though that makes the show tick in this sweet family affair production, with solid assists from the fairly fluid direction by her husband Peter Flynn, and the crafty film and editing by her son, Hudson Flynn. This isn’t exactly a “blur of happiness“, nor is it Shakespeare by any means, but the writing has flair, and the performance draws us in, even if shoes aren’t exactly pretty, comfortable, or your thing.

The 90 minute engagement moves forward,  not at all like a tedious bad date, but not exactly the best or most electric. The production finds most of its moments shoved inside of Andréa Burns’ wild and wonderfully charming performance. A seasoned Broadway actor, best known for her roles in On Your Feet and In The Heights, Burns discovers all of the authenticity and spark within her character’s quirky personality, her energetic body language, and her never-ending straightforwardness. The best parts of the play are messaged out to us and the hostess through her eyebrows, giving us incredibly wry and witty moments of fun and silliness, simply because of her vivacious vulnerability. Bad Dates is definitely more pleasurable than the real thing, with Burns taking us out for the night with the ease that underscores the idea that love is mysterious, and sometimes buggy and thunderous. But maybe, in this good bad date, even the stupid things that we do will fit beautifully well in the end, and become quite lovingly the opposite of lonely. Take that to the cops, Mildred.