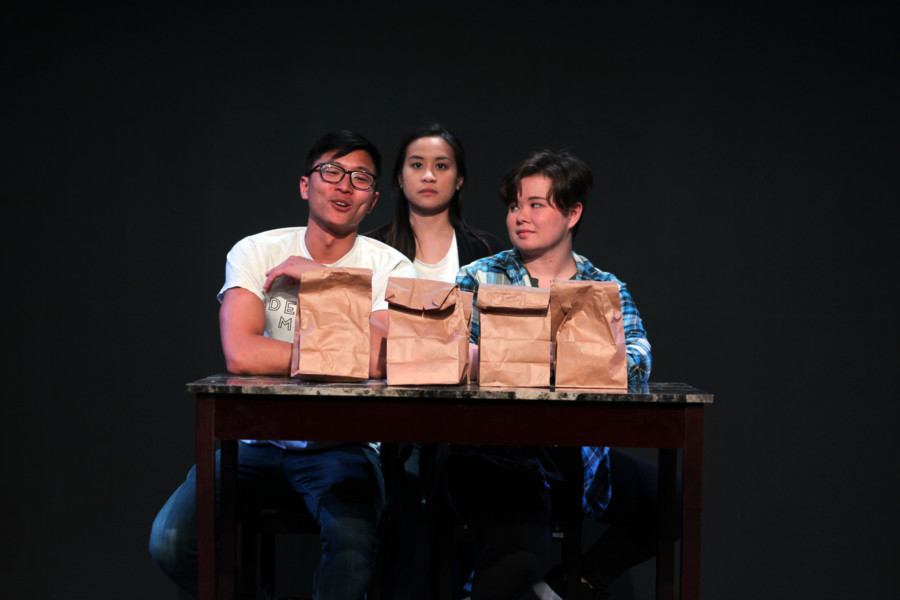 Considering that Illinois just legalized recreational marijuana, nothing could be more timely at the Chicago Musical Theatre Festival than a show about high schoolers who try run a THC infused bake sale. Baked! The Musical, with book, music, and lyrics by Deepak Kumar and Jordan Liu, is a hot ticket for just that reason.

Baked! Is a show that displays a lot of raw writing talent. The adorable cast engages the audience at every moment. But now that the purple haze of hype around the show has cleared, we can see that Baked! Is a loveable, hot mess of a show that needs a lot more refinement as it moves forward from this Festival.

In Baked! Jane Huang (Janelle Villas) is a high school senior from a working class Chinese family in a small Midwestern town. She works in their bakery alongside her father, Mingli (Ryan Tang) and mother, Yunzhou (Vicky Snyder). Jane’s parents are very Americanized. So there is no real conflict over culture and values between Jane and her parents at the center of this show. It would be a lot more interesting if there were.

Jane has applied to go to Harvard on a full academic scholarship, but doesn’t get it. She doesn’t want to tell her parents that she let them down. So she lies to them and tells them she got the scholarship after all. The only problem is, she now has to come up with the two hundred thousand dollars it will cost to go to Harvard over the summer, so she can go to school without letting her parents know that she lied.

She enlists the help of her lifelong best friend, Kasey (Devon Hayakawa) to run a bake sale business with goods they will make when the shop is closed. But Jane and Kasey soon learn they can’t make enough money selling plain mochi. So when they discover that their classmate, “Z” (Yuchi Chiu), who has eschewed college ambitions for the drug business, is making a killing selling a new hybrid drug made from pomegranates, which they dub “indigranate”, they form a partnership with him to sell drug infused Chinese pastries..

Up to this point, the show is chipper and upbeat. It gets darker and darker, however, as Jane abandons her principles to pursue her financial goals. She becomes very much like the central character in the movie 21, who loses his moral compass and ultimately discovers that there’s a price to pay for ill-gotten gains. The net tightens when Jane’s guidance counselor, Mrs. Friedman (Anna Brockman) gets a part time job with the local police, and gets involved with their investigation into a new rumored “drug ring”.

The main plot turns very absurd when Jane, in order to clear out her dispensary at an awkward moment, tells her customers that their drugs are no good. In doing so, she loses all her regular customers. So she decides in desperation that she is going to sell her product to the mob instead. The ”mob” in this town turns out to be an acronym for the Militant Originalist Brotherhood (MOB), an organization of Chinese former Pepsi employees who act like Italian gangsters, and want to sell Pepsi laced with drugs, just like Coca Cola used to do. This bizarre choice is funny in a random way, like a bad SNL skit. But it is also out entirely of keeping with the serious tone of the rest of the show. This isn’t the Chinese Dear Evan Hansen, where the complications in the plot all actually make perfect sense.

Let’s leave the plot aside for a moment, and discuss how the songs fit into the show. Normally, the scenes in a musical build to emotional peaks, at which time characters break into song because the level of heightened emotion in that moment demands more than speech can sustain. Putting songs at the right place in the story, called “spotting” songs, is essential to the flow of a good musical.

Unfortunately, this writing team misses numerous opportunities to insert songs where the emotional moment demands them. Jane’s mom does not break out into an impassioned song when she vents at Jane about how she let down the family business to do her own thing. At the end, when Jane supposedly has learned her lesson, she doesn’t sing about that either. The team generally ends their dramatic scenes after the emotional moment has passed without singing, then tacks on a sad song of self-reflection, sung to no one in particular. That just isn’t great musical theater structure.

There are other missed opportunities which stick out. There are lots of jokes about “baked” people. But nobody onstage ever appears to be stoned. It would be really funny to see some customers get high without realizing it. Also, why Z’s stoner customers would flock for edibles instead of what they are used to using is not explained. A song with a title like “It’s Sweet to Get High” would be a welcome addition.

Romance is always a reason to sing in a musical. It would add a lot of emotional interest to let Kasey end up falling romantically for Z or, more interestingly, for Jane…especially if she were afraid to express that friendship had blossomed into something else for her over time. But that opportunity to complicate the plot, and those relationships, is also left unexplored.

The holes in the show feel plugged only because the cast is so wonderful. Janelle Villas’s Jane is very real. Devon Hayakawa as Casey is both touching and funny in a deadpan way that made me think of Alex Borstein on Mrs. Maisel.Ryan Tang has a light comic touch as Mingli, and Vicky Snyder is emotionally powerful as Jane’s mom Yunzhou. Yuchi Chiu brings the perfect amount of devil-may-care to Z. But the real audience favorite is probably Anna Brockman as Mrs. Feldman. She gets all the funniest bits and delivers them brilliantly, adding a comic lightness to the darkest moments.

Director Taylor Stark balances the heart and humor of the performances very well. Keyboard accompaniment by author Jordan Liu as Musical Director brought out the best in his music.

The laid back humor in the dialogue and the emotional music are the two big strengths of this show. They have all the ingredients here for a really great little musical about the choices we make and the values which we hold important. This young team clearly has talent, but a lack of theatrical experience to shape their show. If they seek developmental guidance from a more experienced producing hand, they could end up with a quirky hit, like a Fun Home. But for now,Baked! The Musical is only half-baked.