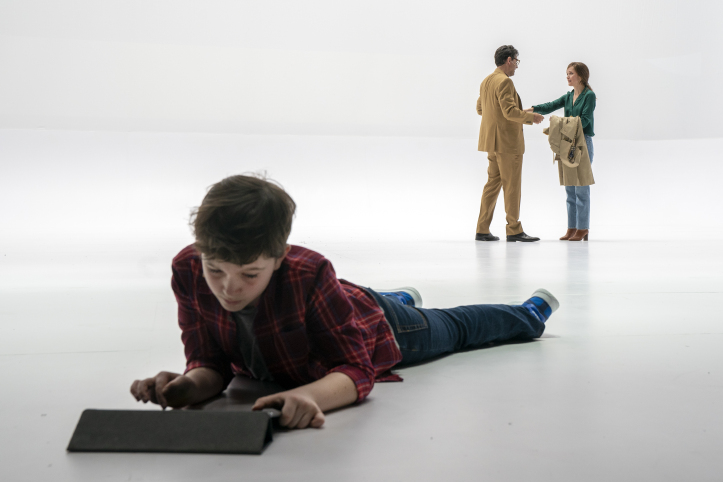 It’s stark and blindingly white. With three panels giving us no clue what is in store for us. Two children; Jolly Swag (TV’s “What About Us“) as Edgar (alternative: Gabriel Amoroso) and Orson Hong (Netflix’s “John Mulaney…“) as Gus (alternative: Emeka Guindo), at the emotional center of this tragedy, do that thing that waiting children do these days, play video games on their smart phones and tablets while ignoring the masses of humanity walking in close by. The air is on fire with anticipation inside the Harvey Theater at BAM as we wait for the phenomenal Simon Stone (Young Vic/Park Ave Armory’s Yerma) to unwind his modern day Medea forward. It’s a star-studded affair, this reinvention, as he jabs and thrusts the classic and iconic Euripides play into our present day news cycle.

“You have a vivid imagination“, one character says to the other. The same could be said of Stone without a doubt, as the unthinkable act that we all is coming later waits in the wing for us to contemplate. How will Stone pull the classic tale out of the past and drop it into our realm. It’s the singular perversity that stings, as we watch the characters drive forward unaware of the world on fire around them. And even as the ashes from that fire begin to fall, the horror that is difficult to understand is painted in bold strokes invisibly huge against a blank slate where nothing can hide. This is all courtesy of the fine work of set designer Bob Cousins (Belvoir St. Theatre’s Cloudstreet), lighting designer Sarah Johnston (Rattlestick’s Monsoon Season) and costumes by An D’Huys (West End’s All About Eve). Even in the extreme close-ups, thanks to projection design by Julia Frey (Elevator Repair Service’s Measure for Measure), the dynamics are tense and hot, screaming for the end of pain while standing in a pile of it.

When Anna is first revealed, the unveiled sharp edge inside Rose Byrne’s (Broadway’s You Can’t Take It With You) portrayal vibrates with an intensity that is utterly magnetic and impossibly triggering. We see and feel her crackling desperation, even as she attempts to be calm and kind to her ex-husband, Lucas, played with subtle clarity by the always captivating Bobby Cannavale (Broadway’s The Lifespan of a Fact). “Don’t cut me off“, “but you did that to yourself“, as the unthinkable is attempted to put in order and clarity. He’s on his best smiling behavior, but we can see how the danger singes his skin. We haven’t quite been given the spark that started the fire, but we soon slowly learn why he is so en-guard against his former wife, and why she feels the way she does. She was once a brilliant scientist in the pharmaceutical world, but the details of her unravelling start to spread out from the source. Loyalty and trust were broken, and her response is to casually and cooly begin to poison his food; not enough to kill him, she’s smarter than that, but enough to make him ill each time, and enough to get her arrested.

It’s a capsized painting of a ship on fire, this re-creation and re-introduction, dynamically imploding inwards and spiraling out. Atrocities happen, we surmise, when we marginalize women and isolate them at their most vulnerable moments; when loyalty gets lost in the attachment and abandonment gets tossed forward without thought or care. “I’m gonna win you back” is of course the intention, even when it sounds like a threat or a curse. It is no surprise, historically, that this character is usually seen as a witch, but here, in Stone’s universe she is a woman scorned, and the disloyalty and disregard doesn’t sit well on her skin.

The other one, Clara, played intuitively by Madeline Weinstein (Broadway’s Harry Potter…) is what stands in Anna’s way, and in more than one manner. “She was trying to kill you” and now she wants to get close once again, the ‘infestation’ of Clara proclaims. She’s the daughter of Lucas’ boss, beautifully embodied by the crisp Dylan Baker (Broadway’s Bernhardt/Hamlet), who happens to also be Anna’s old boss, but the poisoning action has dislodged her from her secure home base, leaving Anna to stumble uncomfortably down to the court-appointed bookshop aisle of Herbert’s, charmingly played by Victor Almanzar (Atlantic Theater/2nd Stage’s Between Riverside and Crazy). He makes the under-developed character shine with at least a bit of fun it its Metamorphosis, but it doesn’t exactly add a lot of depth or meaning in the end. Not even the diligent but out of her depth social worker Elsbeth, played wise by Jordan Boatman (Hulu’s “The Path“), knows quite what to do with Anna or her role in the play.

The blackness starts to descend in a flurry to the enticing compositions by sound designer Stefan Gregory (Barbican’s Avalanche). The pregnancy has an impact that sharply refocuses, as we start to get a gauge as to how this take is going to find its way to the gruesome ending. It’s finds its own path, as this is the journey we are most interested in; the doing and the undoing, the psychology and the psychosis, the ‘how’ and more importantly, the ‘why’. Stone wanted to take the modern news-worthy reality of this unthinkable act, pair it with the Greek tragedy, and thrust it into our laps to see how we feel or fail to understand. The Ivo Van Hove cinematic trick, which is starting to feel a bit overly done theatrically, is unneeded here for the most part, even when it makes for a dramatic reveal for Clara. “You could have stopped all this” Anna says, as she also invites her ex-husband to come with them. It’s blindingly good and powerfully heart-breaking in its authenticity of modern day psychological decompensation. The reality of the inhumanity registers, and Anna’s unraveling psyche and breakdown is impossible not to feel scratching at our skin. Stone has given us a Medea for our time, and an adaptation for our senses.