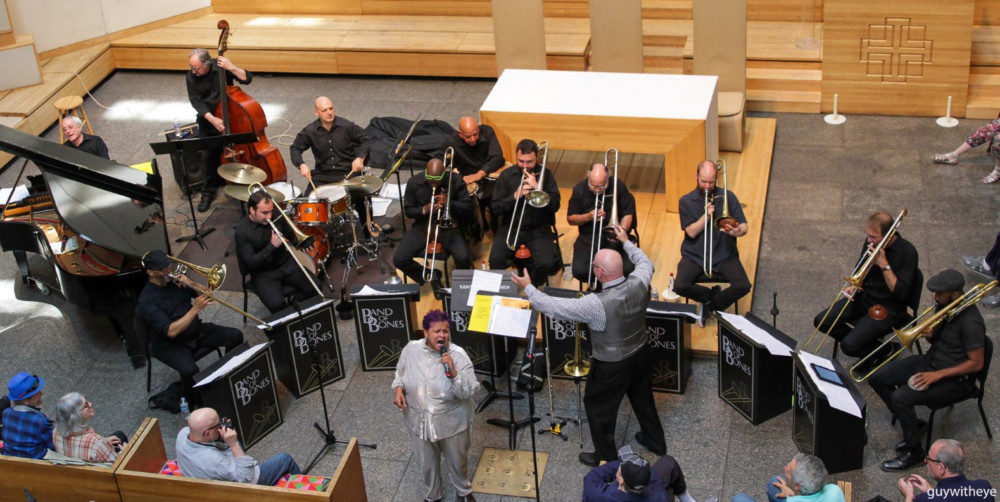 At the Club Bonafide performance the dynamic Antoinette Montague, who performs regularly with the band and is known as“Jazz Woman To The Rescue,” will apply her distinctive style to  such jazz and blues standards as: Is You Is Or Is You Aint My Baby?, How Deep Is The Ocean?, Sway (Quien Sera), Chega de Saudade (No More Blues),  Drink Muddy Water Blues, Just A Closer Walk With Thee and Sister (Miss Celie’s Blues). The Band members at this performance include: Dave Chamberlain, leader, trombone & flute; Cecilia Coleman -piano; David Shaich – bass; Mike Campenni – drums; John Berdeguer – congas[LS1] ; and on Trombones — Willie Applewhite, Robert Edwards, Sara Jacovino, Mark Patterson, Chris Rinaman, Ron Wilkins; Bass trombones: Reginald Chapman and Dale Turk. The cost of tickets is $20. Since seating is limited, you are encouraged to buy advance tickets at http://clubbonafide.com/event/gg-2/

The encore performance on Sunday, October 13(6:00-7:30 PM) at The Cutting Room, one of the hippest venues in New York City, will be truly brassy and dynamic! “Jazz Woman To The Rescue” Antoinette Montague and Mercedes Ellington will both be performing along with a surprise guest artist. The ticket price is $25 with a $20 minimum www.thecuttingroomnyc.com

Raised in Buffalo, Dave Chamberlain began playing trombone at the age of ten, inspired by watching his four cousins playing in a brass quartet onThe Ed Sullivan Show. He began doubling on flute in high school, going on to earn a B.S. degree in flute, and later an M.S. intrombone. His primary teachers have beenAnthony Gorruso, John Wummer, Carmine Caruso, John Swallow andJohn Rojak. Since coming to New York in 1966, Dave has recorded seven CDs as a leader: four with Band of Bones, two with his Afro-Caribbean group Direct Latin Influence (DLI), and one with his Hora Decima Brass Ensemble (Summit Records).  Best known for his work in the Latin field, Dave has also performed and recorded with Conjunto Melao, Wayne Gorbea, Cruz Control, Dave Santiago, and the Mambo Legends Orchestra as well aswith Tito Puente, Rafael Cortijo,  Kako, Mon Rivera, the Lebron Brothers and The Big 3 Palladium Orchestra. Dave toured with the National Company of Cats, and was the Latin band leader (with Direct Latin Influence) for six years at the prestigious Rainbow Room in Rockefeller Center.