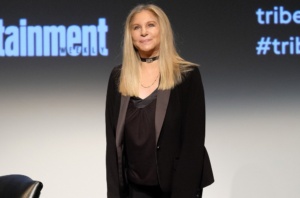 “I wasn’t a happy kid. I used to go to movies a lot on Saturday afternoons. I loved to escape.” 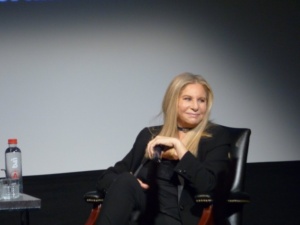 Saturday was a night to remember at The Tribeca Film Festival. At 1pm at Radio City you had The Godfather but  at 6pm at BMCC TRIBECA PAC the one and only Barbra Streisand conversing on her unparalleled career and force field of creativity with filmmaker Robert Rodriguez. On the table was her unhappy childhood, sexism in Hollywood, filmmaking, music and how she wanted to be an actress but the difficulties in getting roles lead her to singing. 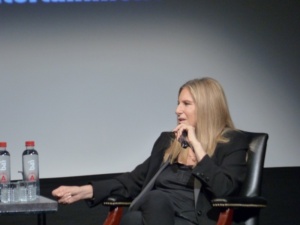 Ms. Streisand’s father’s died when she was just 15 months old. Her unhappy childhood made her want to “escape reality.” Streisand went on to win 2 Academy Awards, 10 Grammys, 5 Emmys, a Tony and the Presidential Medal of Freedom. 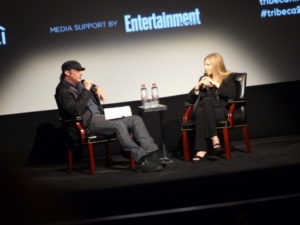 Rodriguez has been a Streisand fan since he was out of the womb. “My mom loved to talk to her 10 children about two things: God and Barbra Streisand.”Rodriguez pointed out that Streisand was the first female to write, direct and star in a feature film. The 1983 Yentl received five Oscar nominations, but not one for Streisand, yet the Golden Globes awarded her Best Director and Film. Streisand was a trend setter for female directors and yet she has been snubbed by the Oscars. Her 1991 feature The Prince of Tides won a Best Picture nod, but not a nod for Streisand for directing. “I didn’t go. I must’ve been more hurt than I thought though because I didn’t direct another film until The Prince of Tides. But I also have to have a passion in order to direct. I loved making that movie.” The Way We Were and her relationship with Sydney Pollack led her to take up directing. “I adore Sydney, we were close friends and told each other secrets nobody will ever know about. But we also disagreed on some things. There were two scenes cut out that I thought were essential to the plot…That’s when I decided to be a director.” 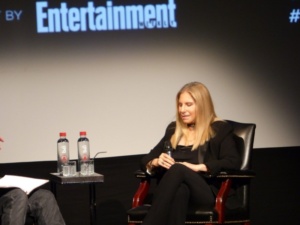 On A Star Is Born she was forced to hire the director, Frank Pierson. “That was tough because I was blackmailed into hiring the director. I hired him to write and he said he wouldn’t do it unless he directed. I had final cut rights. I told him he could have all the credit, but that he had to allow my vision to be there. He agreed, but then I’d show up and the cameras would be in the wrong places.”

On working on Funny Girl and director Willy Wyler, “I learned to despise the media. Every time I had a suggestion it was put in the paper like we were fighting.”

On female directors, Ms. Streisand is very supportive. “I love when I see a woman’s name on a movie and I pray it’s good.”