Barbra Streisand Daisy Ridley and Anne Hathaway At The Ballet

Barbra Streisand Daisy Ridley and Anne Hathaway At The Ballet

Barbra Streisand’s new album “Encore: Movie Partners Sing Broadway” enlists film talent and the result is dazzling. The first released single is  “At the Ballet,” with  Anne Hathaway and and Star Wars Daisy Ridley. Other tracks include Hugh Jackman, Antonio Banderas, Alec Baldwin, Chris Pine, Melissa McCarthy, Seth MacFarlane, Jamie Foxx and a virtual partnering with the late Anthony Newley. to create modern renditions of Broadway classics like “Any Moment Now” from Into the Woods or “Climb E’ry Mountain” from The Sound of Music.

In the footage we found on YouTube, a bare-faced, pregnant and radiant Hathaway, is described by Streisand as “When Anne came into the studio, I was so happy to see her looking radiant and glowing, no makeuo but with the beauty of a woman about to give birth to a child.”

Daisy Ridley was found while she was being interviewed for Gypsy.

There’s a tune from the film musical Charlie and the Chocolate Factory, based on Roald Dahl’s book (later adapted for the stage,and making its Broadway premiere with a revamped production next season); and the three Stephen Sondheim selections include one from Road Show, which ran off-Broadway, and another from Evening Primrose, originally written for television. 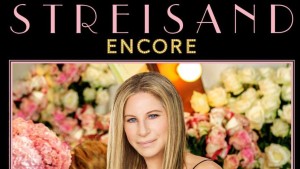 A complete track listing of the standard album follows:

At The Ballet, from A Chorus Line, with Anne Hathaway and Daisy Ridley

Loving You, from Passion, with Patrick Wilson

Who Can I Turn To (When Nobody Needs Me), from from The Roar of the Greasepaint, The Smell of the Crowd, with Anthony Newley

The Best Thing That Ever Has Happened, from Road Show, with Alec Baldwin

Any Moment Now, from an unproduced version of Smile, with Hugh Jackman

Anything You Can Do, from Annie Get Your Gun, with Melissa McCarthy

Pure Imagination, from the film Charlie and the Chocolate Factory (later adapted for the stage), with Seth MacFarlane

Take Me To the World, from Evening Primrose, with Antonio Banderas

I’ll Be Seeing You/I’ve Grown Accustomed To Her Face, from Right This Way and My Fair Lady, with Chris Pine

Climb Ev’ry Mountain, from The Sound of Music, with Jamie Foxx

The album is set to be release August 26th.

Is there a possibility we could see a live rendition of this at the Tony Awards?