Barbra Streisand Is Coming Back in Concert

Barbra Streisand Is Coming Back in Concert 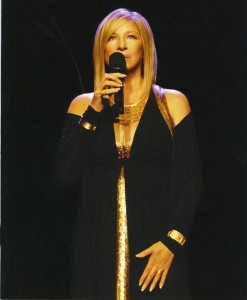 The new album will pair Streisand “with some of Hollywood’s biggest stars to sing Broadway classics.”

The 2016 tour will see Streisand hitting nine cities, starting in Los Angeles on Aug. 2, working through her native Brooklyn for two dates on Aug. 11 & 13, and wrapping in Toronto on Aug. 23 (full tour dates below). Streisand’s live performances are as revered as they are scarce. Her last tour Back to Brooklyn was in 2012.

Tickets for all shows go on sale May 25, although American Express card members can purchase tickets in the U.S. on May 18-22, and in Toronto on May 19-22 (check local listings for more details). Those who purchase tickets online will receive a CD copy of Encore: Movie Partners Sing Broadway, which will come out after the tour wraps but before the end of the year.

The LP — her 35th studio album — finds Barbra in her element with Great White Way standards. Not only did her career start on Broadway in the early ’60s with two Tony-nominated performances, but her 1985 LP The Broadway Album is one of the biggest and best of her recording career.