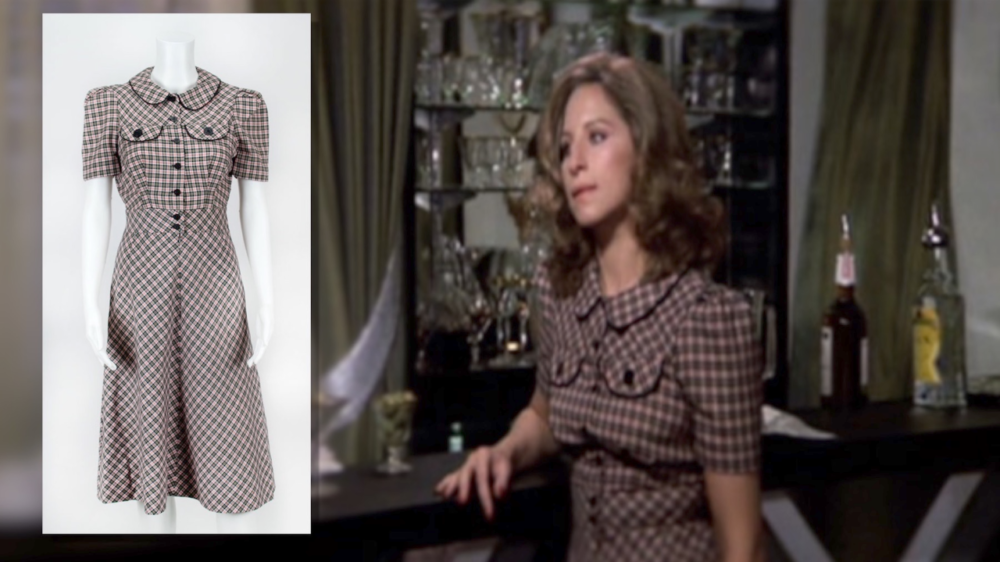 Barbra Streisand’s screen-worn dress from her Oscar-nominated role as Katie Morosky in the 1973 romantic drama “The Way We Were” will be auctioned by Boston-based RR Auction.

Considered to be one of the great romantic films of the 20th century, directed by Sydney Pollack — The film casts Streisand as a vocal anti-war Marxist Jew during World War II, opposite Robert Redford as an apolitical Protestant. The musical score was composed by Marvin Hamlisch and featured Streisand’s rendition of ‘The Way We Were,’ which became her first #1 single in the United States. Hamlisch won Oscars for Best Music (Original Dramatic Score) and Best Music (Song), while Streisand was nominated for Best Actress in a Leading Role; Dorothy Jeakins and Moss Mabry also received Oscar nominations for Best Costume Design for the film, for their work which included this lovely plaid dress.

The dress lacks usual studio, or wardrobe production labels inside, likely because it was custom-made for Streisand and remained in her personal wardrobe upon the film’s completion. Accompanied by a brief letter of provenance from the consignor and a letter authentication.

The consignor notes that his mother’s friend was involved with a charitable organization in Fresno, California, that raised money for cancer research; she was also a friend of Barbra Streisand, who donated this dress to them for a charity fundraising auction. The consignor’s mother’s friend purchased the dress at auction, and presented it to our consignor’s mother after she was diagnosed with cancer, as she was a huge fan of Barbra’s. An exceptional piece of Hollywood history, worn on-screen by one of the great entertainers of the era. (Estimate: $5,000+)

Online bidding will conclude on April 8th, for more information, go to www.rrauction.com.

Suzanna BowlingSeptember 28, 2022
Read More
Scroll for more
Tap
Longtime Former Drama Desk President William Wolf Passes Away From complications related to COVID-19
Your Guide to the Best and Most Useful and Luxurious Baby Gifts You Can Give to New Parents