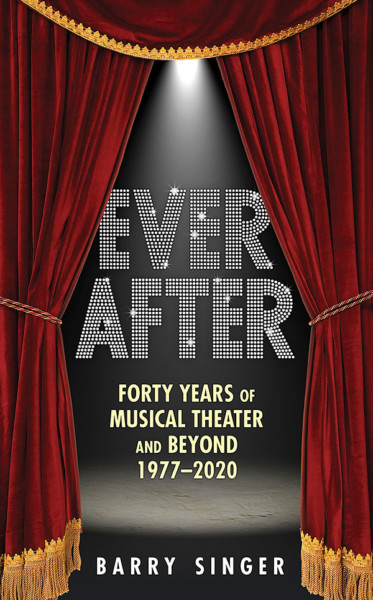 “A thorough and passionate look at the last almost-half-century of musical theatre, full of revealing interviews and stories that cover ground other books have not.  It seems to me pretty much indispensable to Broadway aficionados and fans of musical theater everywhere.” – Stephen Schwartz, composer of “Wicked”

“It is nearly impossible to love musicals and not fall into the well of joy that is Barry Singer’s ‘Ever After.’
With Singer as your reporter you are literally ‘in the room where it happened’ with one of the savviest theater writers of his generation.” ­ – Thomas Schumacher, producer of “The Lion King”

Applause Books is proud to announce the October 2021 release of Ever After (New edition• 400 pages • 978-1493-0-5160-1 • Hardback) by Barry Singer. Ever After remains far more than a detailed show-by-show history. With one hundred first-person interviews, it is also a definitive behind-the-scenes account of how those shows were made. Singer invites the people who created the last forty years of musical theater on and off Broadway to tell their own stories.

From an unparalleled look at A Chorus Line‘s final bow through the revolutionary evolution of Sunday in the Park with George as recounted by Stephen Sondheim himself, the tragic triumph of Rent, the real people behind Disney’s mega-musicals, and even an afternoon with Andrew Lloyd Webber, Ever After proceeds to a moment-by-moment account of the birth of Wicked by composer Stephen Schwartz; the extraordinary journeys of Fun Home, Dear Evan Hansen, The Band’s Visit, and Hadestown through the eyes of their respective creators; and, finally, the miracle of Hamilton recounted by its producer Jeffrey Seller.

Ever After also closely documents the evolving contributions of women and persons of color to the past forty years of musical theater: their triumphs, their setbacks, and their centrality to musical theater’s future.Singer has been a firsthand witness to it all. No one is better equipped to write the history of this era.

Barry Singer has written extensively about the arts for The New York Times Arts & Leisure section, The New Yorker, New York magazine, The New York Times Magazine, Opera News, USA Today, Huffington Post and Playbill, among others. He is the author of Black and Blue: The Life and Lyrics of Andy Razaf, a New York Times Notable Book of the Year; Alive at the Village Vanguard, winner of an ASCAP Deems Taylor Award for excellence in music writing; and Churchill Style: The Art of Being Winston Churchill. He is also the proprietor of Chartwell Booksellers, one of NYC’s last independent bookstores, now in its 38th year.