Stephen Best
Returning to Chicago for an exclusive eight week engagement, Broadway in Chicago has brought back Beautiful – The Carole King Musical just in time for Santa’s annual wish granting. The perfect Baby Boomer musical is intentionally staged during the gift giving season. You will want to find yourself under the musical mistletoe for this terrific show. Carole King is not only an inspired composer and Kennedy Center Honoree, she is a singer-songwriter, personally responsible for the groundbreaking and generation defining album, Tapestry. This coveted four time Grammy Award-winning artist, including wins in both the Album of the Year and Record of the Year categories and inductee into both the Songwriters Hall of Fame and the Rock and Roll Hall of Fame is the subject of the winning musical, Beautiful – The Carole King Story. While still commanding almost sold out audiences nightly on Broadway kin New York City, the national tour once again returns to Chicago. Borrowing similar narratives from a few other successful bio-musicals (Jersey Boys, Motown the Musical and Dreamgirls to name a few) this beauty uses the standard chronological template to weave the tale, following an artist from humble teen-aged beginnings to super-stardom. Solid direction from Marc Bruni and the enthusiastic choreography by Josh Prince make up for any gaps in the book written by Douglas McGrath. The real star here though is the music. Not only with the songs King wrote and made famous for herself, but the first act is populated with music she had a hand in writing famous by others including The Drifters, The Monkees, The Shirelles and Neil Sedaka. Just how influential was King as a songwriter? In 2000, Billboard Magazine named her the most successful female songwriter from 1955-1999. King wrote or co-wrote a whopping 118 pop hits on the Billboard Hot 100 charts. And to think, all she claims she really ever wanted was a family and a home in the suburbs. 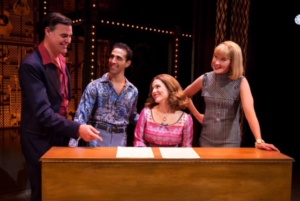 This jukebox musical begins in the living room of teenager Carol Klein (Chicago’s own Sarah Bockel, returning home as a bona fide leading lady), a Brooklyn girl with a natural gift for songwriting. Trying desperately to convince her mother to allow her to take a trip to Times Square to meet with a record publisher, her overbearing mother, Genie Klein (Suzanna Grodner) begrudgingly agrees. Quickly signed, Carole is then partnered with handsome lyricist, high school bad boy, Gerry Goffin (Andrew Brewer). Quickly the two fall in love, have a baby and get married, while record producer, Donnie Kirshner (James Clow) plays this songwriting duo against another set of up-and-coming contemporaries, hysterical hypochondriac, Barry Mann (the winning Jacob Heimer) and stylish lyricist, Cynthia Weil (Sarah Goeke). The quartet began a simultaneous lifelong friendship and professional rivalry, penning hit songs including “On Broadway”, “You’ve Lost That Lovin’ Feeling”, “Will You Still Love Me Tomorrow”, “The Locomotion” and “Pleasant Valley Sunday”. It is no surprise the drama in their professional lives paralleled their private lives as well. “You had a fight, so we had to have a bigger fight” quipped Weil. The remainder of the show follows the newly named Carole King through the eventual demise of her marriage and professional partnership with Gerry. The couple struggled through a litany of issues including his drug abuse, his infidelity and his mental illness. 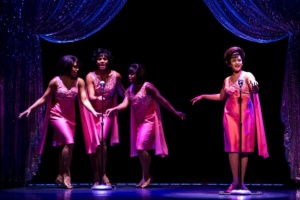 The beginning toe tapping, explosive medley of hits from the 1950’s and 1960’s, staged in an impressive, two-story, Derek McLane designed set of metal cubicles, the visual parallels to the recording studio machine, a pop music factory of sorts with the hit makers respectively locked in their offices, cranking out popular bubblegum music to the masses, should not be missed. If Act One is the whirlwind ride up the ladder of success, the second act grounds the proceedings with a richer, more authentic emotional pathos. Set in the late 1960’s and early 1970’s, Carole’s personal crisis of faith proved highly relatable. Divorced with two kids, her future seemed cloudy at best as the record industry was filled with successful acts writing and recording their own music, including Bob Dylan, The Rolling Stones and The Beatles. Her old songwriting for other artist skill set was quickly becoming obsolete in an industry she feared was leaving her behind. It is here, the musical truly solidifies as King finds her own voice, connecting the audience with her artistically. “You’re a girl and you sing girl songs” said her manager as King prepares to relocate to Los Angeles and eventually records Tapestry. It is here this lifelong New Yorker says goodbye to her past with “You’ve Got a Friend” letting go of any “Chains” binding her to previous limitations. Rounding out the musical, we learn the personal agony behind the lyrics of “(You Make Me Feel Like) A Natural Woman”, the triumph of the title track, “Beautiful” and at the end,the audience is invited to stand and sing along with the cast during the “I Feel the Earth Move” curtain call. 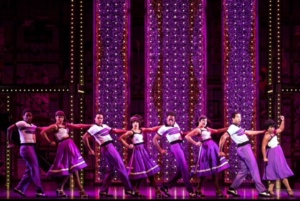 Transporting the actors through the decades, fantastic costume designs from Alejo Vietti and impressive wig and hair designs of Charles G. LaPointe. They both delight and sometimes inspire giggles. Bell-bottoms are truly tough to pull off on any body type. Peter Kaczorowski’s lighting design transplants the audience from the low-lit, midnight streets of Manhattan, to the sunny suburbs and finally, center stage at Carnegie Hall, where Carole’s musical story both begins and ends. We now know what happened. Tapestry topped the U.S album chart for 15 weeks in 1971. King later went on to record an additional 25 solo albums. Beautiful the Musical was rewarded as well, with seven Tony Award nominations and two wins; Jessie Mueller took home the 2014 Best Performance by an Actress in a Leading Role in a Musical and Brian Ronan received the Best Sound Design of a Musical and the cast album went on to win the Grammy as well. But accolades aside, Beautiful – The Carole King Story has production numbers that will absolutely have you tapping a toe, then shedding a tear. While the story as a whole may not be perfect, the real reason to attend is the fabulous music and that is truly “Some Kind of Wonderful.” 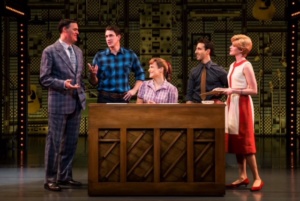 Beautiful – The Carole King Musical is currently playing at the Cadillac Palace Theatre through January 28, 2018. 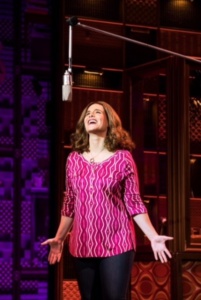