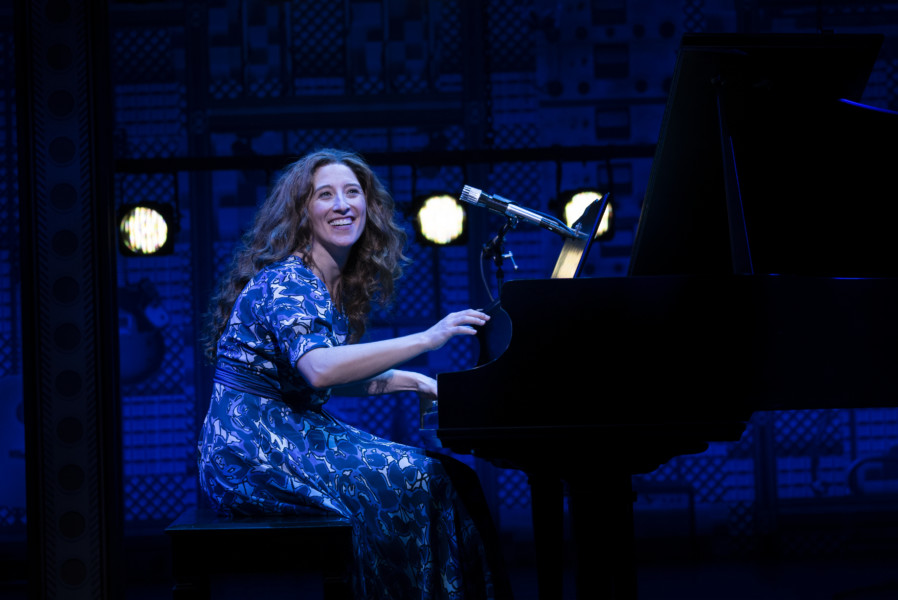 Another sign of the return to normalcy is the restarting of national tours of Broadway shows, bringing the joy and magic of our biggest hits to people around the country. Last Tuesday night, the national tour of “Beautiful – the Carole KIng Musical”  restarted after a hiatus of six hundred days.

I am an unabashed fan of this show. I’ve seen it three times previously, with Jessie Mueller, her sister Abby Mueller, and Chllean Kennedy respectively,  each in her own way channeling the iconic singer-songwriter, Carole KIng, in this biographical jukebox musical.

This time around, Sara Sheperd plays Carole Klein (her real name) with warmth, wit and heartfelt humility. Her performance evokes echos of another Jewish star, Fanny Brice (whom Ms. Sheperd has also played, in “Funny Girl”).  In Ms. Shepherd’s interpretation, wereally see the girl who never felt she could compete with the shiksa goddess image for female stars of her youth, until circumstances compelled her to step out on her own.

In her journey to pop stardom, Carole must endure the ups and downs of both life and showbiz. At age sixteen, over the objections of her protective mother, played with comedic genius by Rachel Coloff, Carole ventures out of New Jersey into big, bad Manhattan. There she manages to sell her first song to producer Don Kirshne , portrayedf with just the right balance of humanity and sleeze by Matt Loehr.

Carole also befriends two fellow songwriters who will become both allies and competitors. Barry Mann, played with a George Costsanza-esque frustration by Ryan Farnsworth,  is a self-proclaimed hypochondriac who falls  in love with his smart, sassy lyricist, Cynthia Weill. She is given just the right balance of edge, beauty and empathy by the smart and sassys Sara King.

Searching for a lyricist stronger than herself, Carole enlists the artistically tortured Gerry Goffen, played with fine nuance by James D. Gish, with whom she also promptly falls in love. When she gets pregnant at the start of their relationship, they marry too young. That comes back to haunt them in Goffen’s need for sexual variety to quell his personal insecurities and fear of having missed out on life.  Making this haunted and unfaithful man equally sympathetic in the end is no easy task.  But Mr. Gish brings such charm and honesty to his portrayal that he manages to do just that.  This fine  ensemble, so well cast by Stephen Kopel of C12 Casting, under the deft and sensitive direction of Marc Bruni, captures the warmth and honesty of the show which makes it so compelling.

As most people got to know Ms. King only through her debut album, “Tapestry”, they may not be aware that she started out writing hit songs for some of the biggest pop groups and soloists of her day. Those artists, including the Shirelles and the Drifters, are nicely recreated by the young ensemble, with particular kudos going to  Rosharra Francis as Janelle Woods, and an outstanding baritone, Paul Scanlon, as one of the Righteous Brothers. Mr. Scanlon also shines in a supporting role as Nick, a musician who helps Carole transition to live performance.

Concerns about the economics of returning to live performance has all producers watching their expenses. But given that this is the national tour, the pit band was painfully small. More annoying even than the lack of real strings, when called for at a particular moment in the show, is how awful the synthesized strings sounded.  These days, anyone can buy a fully sampled digital symphony orchestra for a few hundred dollars, play it off a keyboard, and no one would know the difference.  So the combination of  cheapness on the part of the producers, and the failure of the musical director, Alan J. Plado to fight for an important aspect of the show’s  sound, was pretty disappointing.

On top of that, the constantly shifting and unbalanced mic levels, plus one annoying moment of unexpected feedback, made me think the sound mixer had never seen the show before. Of course, being opening night of a one week run, that may well have been the case.