Because I Could Not Stop: An Encounter With Emily Dickinson Doesn’t Quite Connect 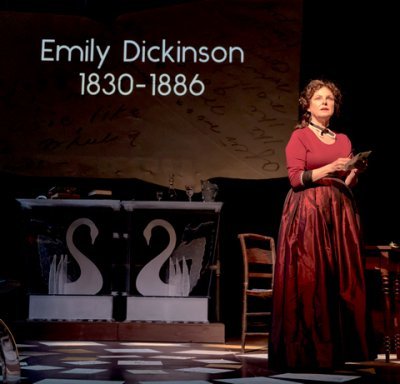 Because I Could Not Stop: An Encounter With Emily Dickinson Doesn’t Quite Connect

Emily Dickinson produced some of the most haunting and mysterious works of the 19th century. Now the Ensemble for the Romantic Century takes on Dickinson’s inner world with  combines theatre, music, and multimedia. The show stars Angelica Page (Turning Page, Gore Vidal’s The Best Man) as Miss Dickinson. Written by James Melo and directed by Donald T. Sanders, uses Dickinson’s own words, mixed with chamber music which attempts to explore the inner life of the American poet. 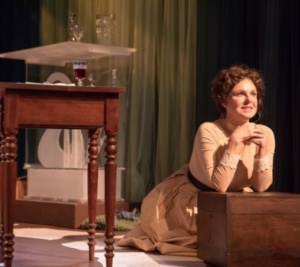 The play begins and end in 1885, the last year of Dickinson’s life. Drawn from her poems and letters, the show is detached and has no beginning, middle or end as there is no arc. Angelica Page, though a wonderful actress is miscast in this role. She neither looks nor acts like one would expect Emily Dickinson. Ms. Page is poorly costumed by Vanessa James and not well directed. She poses and acts too arrogant to be the voice of these lyrical poems. 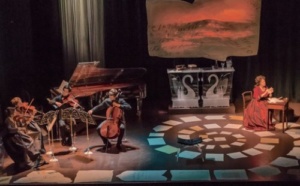 Their choice of composer Amy Beach (1867 – 1944) is music written after Dickinson’s death in 1886. This somber, morose live chamber music was performed beautifully by Victoria Lewis (violin), Mélanie Clapiès (violin), Chieh-Fan Yiu (viola), and Ari Evan (cello), with by ERC Co-Artistic Director Max Barros on piano. This choice of composer made the evening clash as it was the wrong tone to Dickenson’s poems and would of been better suited to Sylvia Plath. 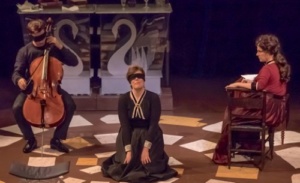 “Ah, Love But A Day!” which is set to a poem by Robert Browning, “Stella Viatoris” by the minor poet Jessie Hague Nettleton and “Chanson d’Amour” to a poem by Victor Hugo is gloriously sung by soprano Kristina Bachrach again makes no sense. Why not songs set to Dickenson instead of male writers. The final piece was Ricky Ian Gordon’s setting of Dickinson’s “Will There Really Be A Morning?” is lovely but none of these pieces are light so they dragged the evening even further into a mournful, melancholy depressing evening.

Normally the set and production design for ERC is delightful, but this time it is haphazard and seems more for Lewis Carroll. The ground a spiral of papers and the grand piano is Plexiglas held up by two swans. Looming above is a screen that plays videos designed by David Bengali that reminded me of those Disney films where the paint brush drew these rather childish pictures.

Altogether this whole production was misfire and was 3 hours of

Because I Could Not Stop:: An Encounter With Emily Dickenson: Ensemble for the Romantic Century at The Pershing Square Signature Center, Romulus Linney Courtyard Theatre, 480 W. 42nd St. though Oct. 21.