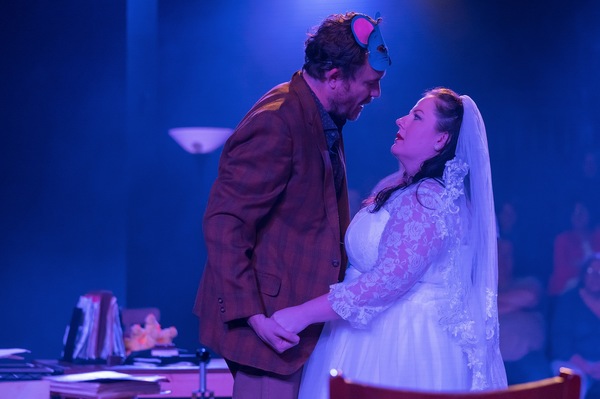 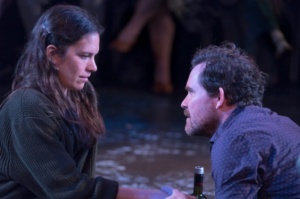 I am normally a fan of Bedlam the outrageous theatre company that takes classics on a new spin. Their newest production Uncle Romeo Vanya Juliet honestly left me confused. You have to be very prolific in both Chekhov’s Uncle Vanya and Shakespeare’s Romeo and Juliet because it’s a mash-up on these two plays at once. In modern attire (by Charlotte Palmer-Lane) the company sets the props, rolls on white painted trees and creates their world continuously. Then the dialogue starts with the charming, alcoholic doctor Astrov (Eric Tucker, whose also the director), refusing to take tea as Sonya (Susannah Millonzi) the hard-working, country girl moons after him in silent longing. This is where it starts to be confusing because this conversation is normally between Astrov and the old nanny, Marina. Sonya becomes the nurse when the Shakespeare play is evoked. 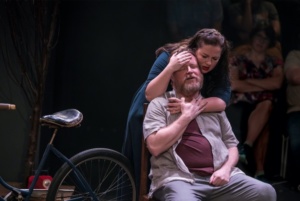 Vanya (Edmund Lewis) is in love with the sexy Yelena (Zuzanna Szadkowski), who is with the professor (Randolph Curtis Rand), but in lust with Astrov. In Romeo and Juliet they are  Romeo, Juliet and  Mercutio spouting off their lines in perfect poetic measure. The night in  Uncle Romeo Vanya Juliet is filled with misplaced desires.

In Act two Vanya aims his gun at the professor and we are but in a dream. More based on R&J we speed through weddings to suicides. Yelana’s feels trapped being cast in the role of Juliet and is trying to escape her path. Vanya, becomes a teen who has lost his marbles as he weeps and writhes in pain. He finds his escape in the morphine from the doctor. the professor becomes Friar Lawrence, as Sonya waits in patience for her story to return. 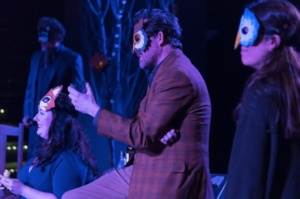 The best moments are when Astrov and Vanya splice together R&J’s “Queen Mab” with a night of vodka shots. Also Sonya’s bonding with Yelena as Yelena knowingly manipulates her. In the end Yelena cuts lose with “Total Eclipse of the Heart.” It seems lust trumps love.

All five actors speak the verse in perfect measure and make it sound as if it were written in today’s cadence. I was really impressed with Ms. Millonzi work as she seemed to be the heart and soul of the piece.

Director Eric Tucker, takes himself too seriously here and a director should never take on a major role in a show that he is directing because one or the other lacks. In this case it was the direction, which seemed all over the place. Kimberly Pau, adaptation of Vanya is morose and tedious. The company fares much better with the zany R&J portion. John McDermott’s was eclectic and fun with set pieces and props on a constant roll. Karin Graybash’s sound design included pop music enhanced with a lone guitar player (who is not credited).

Uncle Romeo Vanya Juliet was just too ambitious and it doesn’t work. With a show paced at over two and half hours, the audience needs to grasp the why’s, here it just seemed like experiment not quite completed. This original, creative, text-defying theatre company lost their way on this production.