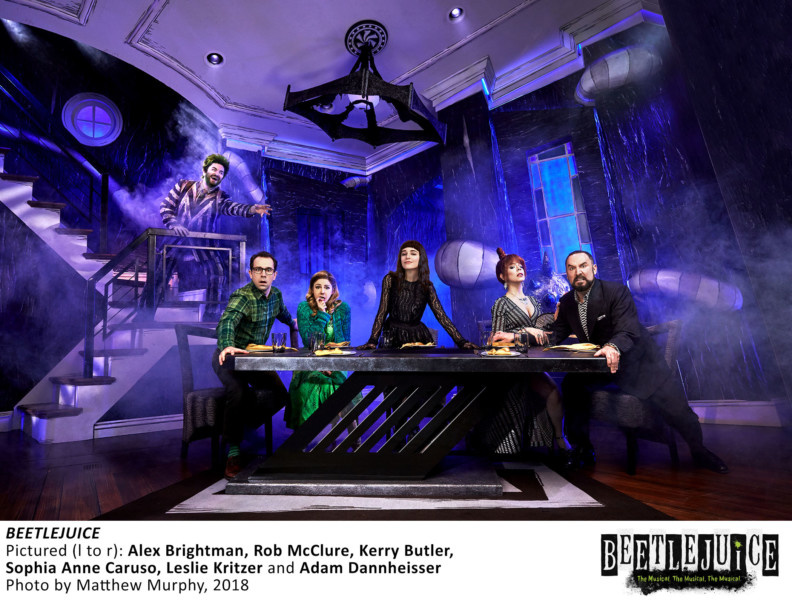 If you know the movie Beetlejuice and loved it, then you are going to love the Broadway version. The night I attended the audience was applauding after every number. You would have thought you were at a rock concert. This politically-incorrect bundle of talent has its fans and I can completely understand why. It is laugh out loud funny.

Based on the Tim Burton cult classic, the Winter Garden Theatre is brought to life by costume designer William Ivey Long, scenic designer David Korins and the amazing projection design by Peter Nigrini. Normally you wonder how a show can rack up such a budget, but in Beetlejuice the money is well spent. An homage to Burton’s 1988 gothic masterpiece is stamped on every feature.

As Beetlejuice, Alex Brightman (School of Rock: The Musical), is perfection. Brightman is the real deal, he can act, sing, dance, and deliver comedy with a deadpan approach that is like Lenny Bruce on crack.

As Lydia, Sophia Anne Caruso takes a role made famous by Winona Ryder. I have been watching this seventeen-year-old since she appeared at the Lucille Lortel in The Nether for MCC, for which she won a Lucille Lortel nomination at 13. I then watched as she went into David Bowie’s Lazarus and discovered what a marvelous singer she was. She was nominated for an Outer Critics Circle featured actress award. Then on Broadway uncredited she won our hearts in Blackbird. Here, Ms. Caruso stuns with rock perfect vocals. Mark my words, this girl is a mega star.

I am not going to go through the plot because all you have to do is watch the movie. I can tell you that the wonderful Leslie Kritzer takes the role of Delia, played by Catherine O’Hara and makes Harry Belafonte’s “Day-O (The Banana Boat Song),” her own. If that weren’t enough, she also plays in the Netherworld Ms. Argentina, who stops the show with “If I Knew Then What I Know Now”.

As the girl scout who is terrorized, Dana Steingold also has a wonderful comedic moment.

Scott Brown and Anthony King’s book pretty much sticks to the film. Just know this isn’t now and never has been a show for kids. Expect the F word and some PC incorrectness, but also expect to laugh. This show does not take itself seriously and neither should you.

The music and lyrics by Eddie Perfect (King Kong: The Musical) are at times memorable. Expect a soft-rock score that sounds as if you have heard it before.

Alex Timbers’ direction is clever as is the choreography by Connor Gallagher.

If you are sick of being told what you can and cannot say, this show will be right up your alley. We all need a break and Beetlejuice is a fun reprise.