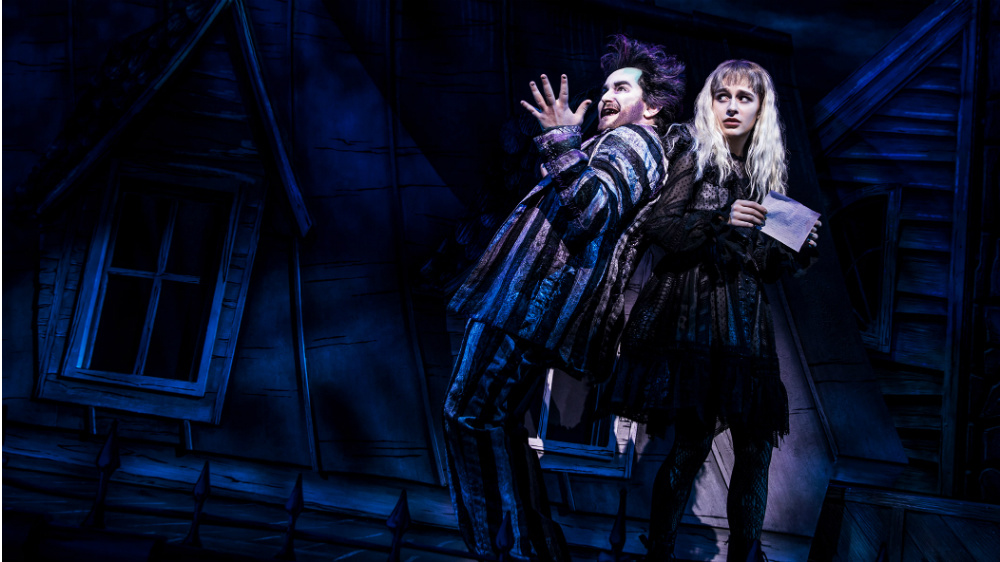 Warner Bros. Theatre Ventures (Mark Kaufman) and Langley Park Productions (Kevin McCormick) announced that The Winter Garden Theater Box Office (1634 Broadway) will open for ticket sales for the new Broadway musical comedy Beetlejuice on Thursday, February 14, 2019, at 10am. The first 100 patrons to show up at the Winter Garden Theatre box office dressed in Beetlejuice  black and white (Beetlejuice prefers stripes) can purchase 2 specially priced weekday orchestra preview tickets for $33.33 each (In honor of the 30th Anniversary of Tim Burton’s film – say it 3 times!).

Any living souls (recently deceased need not apply) dressed in black and white who show up at the Beetlejuice box office between 10am and 11am on Thursday, February 14, will be entered to win an exclusive meet and greet and photo opportunity at the Broadway rehearsal hall for Beetlejuice with cast members. At 11:00am, one lucky grand prize winner will be chosen and whisked away to the Beetlejuice Broadway rehearsal hall for this once in an afterlife-time opportunity.  For official rules please visit this website.

It’s showtime, folks! The ghost-with-the-most comes to the stage in this edgy and irreverent musical comedy based on Tim Burton’s dearly beloved film. Beetlejuicetells the story of Lydia Deetz, a strange and unusual teenager obsessed with the whole “being dead thing.” Lucky for Lydia, her new house is haunted by a recently deceased couple and Beetlejuice, a delightful demon with a real zest for life. When Lydia calls on Beetlejuice to scare away anyone with a pulse, this double-crossing specter shows his true stripes, unleashing a (Nether)world of pandemonium, and the biggest sandworm Broadway has ever seen.

Suzanna BowlingSeptember 23, 2022
Read More
Scroll for more
Tap
On the 60th Anniversary of “The Day The Music Died” Bucks County Playhouse Brings Back “Buddy: The Buddy Holly Story”
CSC and August Strindberg: Why Are We Not Doing New Plays?