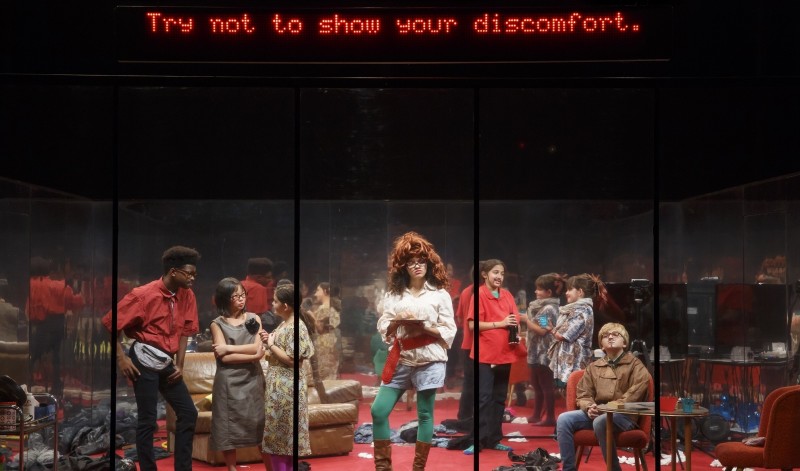 Before Your Very Eyes A Quasi Live Documentary

Before Your Very Eyes A Quasi Live Documentary

Before Your Very Eyes is suppose to be this ingenious new form of experiential theater by the British/ German based company The Gob Squad, now in residency at the Public Theatre. I think this company just wanted to do a theatrical version of Richard Linklater’s “Boyhood” while cutting the corners filming each life cycle. It would have been more impressive if Before Your Very Eyes had been more like Michael Apted’s documentary “Up,” which follows a group of 14 from age of 7 to 50 and the show is still on-going.

For ninety minutes we watch seven kids, ages 9 to 14, behind plexiglass “grow-up,” and then die before our eyes. I watched Team 1 (Charlotte Beede, Rose Bell-McKinley, Meghan Chang, Keanu Jacobs, Simone Mindolovich, Elijah Pluchino, and Miles Sherr-Garcia)(there are two sets of kids) as they were put through their paces as a unseen “voice” tells them what to do and in some cases how they turn out. For the sake of making sure you understand what is being said an LED readout appears above the stage. We are told “Real live children! A rare and magnificent opportunity to witness seven lives lived in fast-forward before your very eyes. “The problem with that statement is it seems highly manipulated and though the “actors” are kids, they are just that actors and this is not real.

As we walk in a “one way “ wall separates the kids who are playing. Then the “Voice” begins and instructs the youngsters on how they pass through the ages of their lives. Thus the manipulation begins. The most interesting portion is the video that captured them two years ago and reacts with their ageing. This is real and interesting, as well as eye opening. Flash forward and the entire group has turned into smoking goth teenagers. As interesting as this was not all seven would have turned out the same. Flash forward again and we are in middle age where they are all failures, two are lesbians and all are stereotypes. We are shown the adult versions singing “Non, Je Ne Regrette Rien.”as if all middle age people do not get the lives they planned. Last we see them age and die. These transformations use wigs, baby powder, face paint, clothing, leather, S&M chains, cigarettes, cocaine, bottles of wine, other props and a go pro.

If this hadn’t been so manipulated and scripted I could see the benefit. I wasn’t a fan of “reality” TV and I am not a fan of this.