Belfast Where Nothing and Everything Happens

Belfast Where Nothing and Everything Happens

Belfast written and directed by Kenneth Branagh, is one of the Best Picture nominees and I can see why. This deeply personal film depicts a violent time in Northern Ireland, seen through the innocent eyes of a nine-year-old boy named Buddy (Jude Hill). Shot mostly in a soft black-and-white by Haris Zambarloukos, he adds a vibrant  bursts of glorious color to break off the reminiscent feeling of the past. This intimate portrayal is about neighborhood, loss and family. 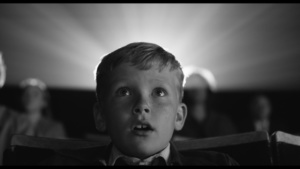 Set in 1969 we see and hear everything from Buddy’s youthful eyes and ears. This is obviously a stand-in for Branagh. Hill is a delight and we fall in love with him. He is a star in the making. The film starts as the out of control Protestant mob charges down Buddy’s block as the kids are playing make-believe. The mod is trying to root out the neighboring Catholic families. Suddenly a trash can lid Buddy is using as a toy shield becomes a vital piece of protection against flying rocks and homemade bombs. 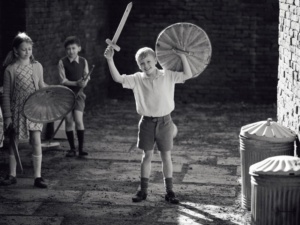 Buddy sees his mother (Caitriona Balfe) as Ginger Rogers and his father (Jamie Dornan) as Fred Astaire. They are both kindhearted, feisty and love their children, despite problems with the tax man. As his Grandparents Judi Dench and Ciaran Hinds, (both nominated in the supporting actor category) are loving, as they effortless tease each other every chance they get. This is a marriage born of true commitment. These kind of families never wanted more than what they have. They are all committed to each other and Belfast, which is where they expect to marry, grow old and die, knowing everybody and everything. The conflict that arose from religion, destroyed what religion was suppose to be teaching. Through the violence “Star Trek” always seems to be on the TV and films like Chitty Chitty Bang Bang, Barbarella and High Noon, give the much needed relief from the world and the danger that surrounds them. Despite the troubles, the camaraderie that has connected the families on this block for decades, still exists. As the threat consistently grows Buddy and his family have to decide if they must leave this neighborhood where they’ve lived their whole lives, where everyone knows everyone, or do they move and start over? Due to the lack of work in Ireland Buddy’s father’s has been working in London and comes home every two weeks. When he is offered a promotion, a raise and a house with a garden, he feels this is the time to move. Though this is the logical choice his family does not want to move. Buddy is crushing on the blonde haired Catholic girl who is the smartest student in class. His love for her knows no bounds, but he hasn’t a clue. Van Morrison’s “Down To Joy”  plays during these encounters. The song by Morrison is also Academy nominated. 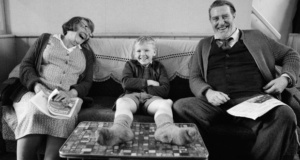 When Buddy is dragged into the troubles, their choice is made and the family is forced to make a choice of leaving their world, their neighbors and those they love behind. Branagh is obviously nostalgic, as he shows his memories with a sincere love. The acting, the cinematography, the sound and the direction makes this a contender for Best Picture of the Year.

G. H. HARDINGJanuary 20, 2023
Read More
Scroll for more
Tap
The House Of Gucci Where Greed and Passion Get Out Of Hand
The Glorious Corner