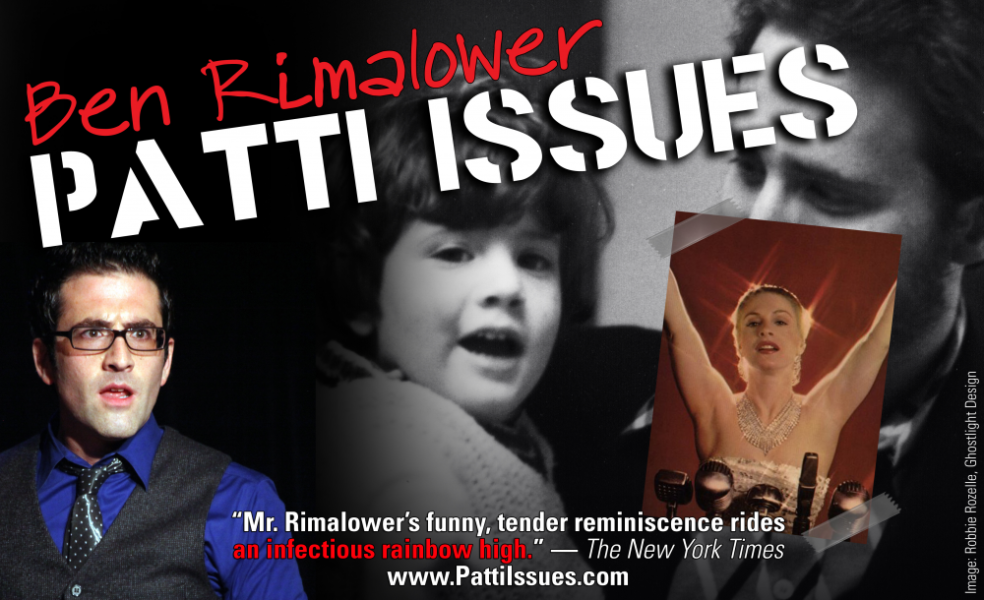 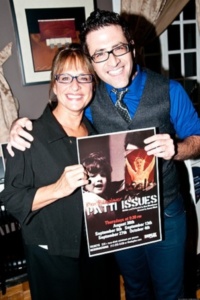 Ben Rimalower will celebrate the recent release of his plays Patti Issues and Bad With Money by Roven Records on Audible.com with a special performance of Patti Issues at The Green Room 42 on Sunday, January 28 at 7pm. In Patti Issues, Rimalower explores the ways his lifelong obsession (and eventual working friendship) with Patti LuPone helped him navigate a tumultuous relationship with his volatile father. Since premiering in 2012, Patti Issues has garnered a tremendous amount of great press and word-of-mouth from attendees such as Tony Kushner, Alan Cumming, Laurie Metcalf and Ms. LuPone herself, who said, “The show’s fantastic. It’s really wonderful. I was moved.” Patti Issues is directed by Aaron Mark (Empanada Loca with Daphne Rubin-Vega, Squeamish With Alison Fraser).

The Green Room 42 will soon celebrate its year anniversary as the theater district’s premiere destination for live music and events. The 140-seat space lets audiences experience shows up close and personal. During the shows, guests can enjoy Mediterranean-inspired dishes alongside signature cocktails, craft beer and wine with no food/drink minimum. Tickets can be purchased at www.TheGreenRoom42.com. The Green Room 42 is located at 570 Tenth Avenue in New York City; @TheGreenRoom42.

Ben Rimalower is the author and star of Off-Off-Broadway’s long-running, critically acclaimed, smash hit solo plays Bad with Money (The Advocate’s #1 Solo Show of 2014) and Patti Issues (New York Time Critics Pick, M.A.C. and Bistro Awards, Official Selection: Adelaide Cabaret Festival and Eugene O’Neill Theater Center Summer Conference), both of which he continues to perform around the world, while simultaneous regional productions pop up with other actors “playing” Ben Rimalower, including two-time Tony nominee Robin De Jesus in New York. His “Do You Have Patti Issues?” PSA with Alan Cumming and Patti LuPone was a homepage selection on FunnyOrDie. He is a regular contributor to Vulture, Playbill, Out, Time Out New York, Decider and New Now Next and his short story, Little Old Sam, was included in the book My Dog, My Friend.

As an actor, Ben has been seen at Joe’s Pub in Our Hit Parade, and Murray Hill’s Oscar Night show, as both Patti LuPone and Elaine Stritch in You Like Me and as a literally flaming Jack Nicholson in The Witches of East Village at the Gramercy Theatre with Coco Peru and Chad Michaels, in addition to the upcoming The Night Elaine Stritch Died by Matte O’Brien.  Television appearances include Bravo’s “Real Housewives of New Jersey,” “Watch What Happens Live,” ABC’s “Extreme Makeover” and Billy Eichner and Rachel Dratch’s “Halloween Adventure.”

Ben directed and produced the Off-Broadway plays Joy (Actors Playhouse, Out Magazine: “Top Ten Theatre”) and The Fabulous Life of a Size Zero (Daryl Roth/DR2 Theatre), as well as numerous off Off-Broadway plays, readings, benefits and concerts. He has earned the title the “Midas of Cabaret” (The Advocate) helming a slew of solo shows, most notably conceiving and directing Leslie Kritzer is Patti LuPone at Les Mouches (Time Out New York Award) and subsequently producing Sh-K-Boom/Ghostlight Records’ long- awaited recording, Patti LuPone at Les Mouches.