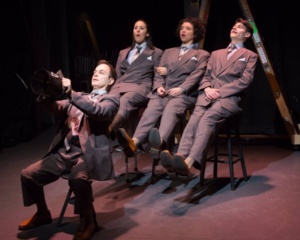 If you like the Elevator Repair Service or Bedlam, then you will love Ben Woolf’s Angry Young Man. Basically it is the telling of a story, where four actors each play the lead role tag teaming their way through the plot. Christopher Daftsios, Rami Margron, Max Samuels and Nazli Sarpkaya are all incredibly talented slap stick comedians. We follow (or at least try) the tale of Yussef an immigrant from the Middle East, who has sought refuge in London after several botched surgeries. In London he is taken advantage of, until he meets Patrick, a young revolutionary. He gets pulled into the underworld, escapes, then is back in when he falls for Patrick’s girl, Allyson and Patrick does not take kindly to the betrayal.

This is comedy at it’s broadest with Christopher Daftsios their ring leader with every loud noise and obnoxious mugging possible. Think the film “After Hours”done by The Keystone Cops, The Marx Brothers or The Three Stooges. There is some kind of message about immigration in here, but Yussef out of conceit has killed four people during surgery and seeks a new place to start. While in London he kills another man accidentally and we are suppose to be thrilled that he escaped his country for a better life? Sorry not buying it, nor am I a big fan of this kind of humor. Did the audience laugh yes, did I understand why….no. I understand the cleverness of it, but this is a serious subject to me and I am not a fan of broad comedy.

The direction by Stephen Hamilton was perfection, with comedic timing that never lost a beat. I think I have to credit Douglas Mills for his technical direction as well as Dan Renkin for his fight direction. The oversized same brown double-breasted suit by Yuka Silvera was quite ingenious. The sound design by David M. Lawson….loud! The dialects coached by Sam Lilia, were perfect.

I did find Samuels who played Peter’s girlfriend Allyson rather funny. Many will love Daftsios who nearly steals the show for most of the people I talked to. His style is just too much for me.

In the end the show rambled to much, was too confusing and hard to take especially after the London terrorist attack. However for those who love comedy shows, especially BROAD comedy you will love this, it’s just not my cup of tea.