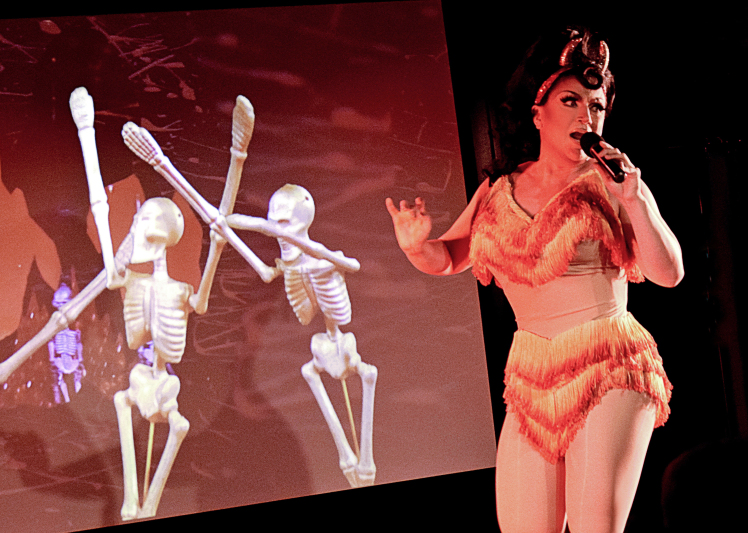 BenDeLaCreme’s Rising Up Into Dante’s Inferno Down Below

BenDeLaCreme’s Rising Up Into Dante’s Inferno Down Below

I must confess, and not in a catholic kind of way, because that kind of on your knees religion has nothing to do with the uproarious show, BenDeLaCreme’s Inferno-a-Go-Go currently damning us all to hell at the Laurie Beechman Theatre in Hell’s Kitchen, naturally. But it does have a lot of a lot to say about the other kind of on-your-knees kinda praying. My confession revolves around the simple fact that I do not watch RuPaul’s Drag Race, nor have I ever heard of one of the most well known contestants, the heavenly smart and witty BenDeLaCreme, the creator/performer/writer and all around mastermind of the show.  I only came to this show because one of my best friends was sitting next to me when I got the press invite, and he squealed like an excited pig when I asked him if I ever heard of a creature called BenDeLaCreme. (I can write this statement, because I’m pretty darn sure he’ll never read this review as there are just far too many words for his liking.)

I will also confess, quiet honestly, that this beautifully coifed guide, with costumes by Danial Helman, who takes through the Inferno of Dante’s creation couldn’t have been more hilarious. Throwing pun after pun, with a whip sharp razor bluntness of a pro, BenDeLaCreme offers us one of the most drag-olicious descent into hell since the original text was written (dramaturgy: Scott Shoemaker). Through inventive and witty video dioramas made by the star herself; projections (video editor: Shane Wahlund) that had me wondering if Finn Ross had anything to do with them (google the name), BenDeLaCreme ushers us through the nine circles of Hell as if we are heading down a yellow brick road to meet the grand wizard,. The music is wildly inappropriate and perfect, with original music by Major Scales and sound design and stage management by Kevin Heard. And as it turns out, Satan is no RuPaul of the underworld, but the gates of hell couldn’t have been manufactured with more laugh-out-loud intelligence and gracious crass charm, so put your hands up for Miley and sing a song of praise for BenDeLaCreme.  Religion has never been funnier, and this introduction to this brainy drag queen was pure hellaciously and heavenly quick-smart and inventive. So Burn Baby Burn, I’d be glad for another tour when you’re back in town.

Suzanna BowlingJanuary 17, 2023
Read More
Scroll for more
Tap
There’s A Lot of Cool Talk of the Blues Overheard at Joe’s
He Says: Dance Nation: Haunted By My 13 Year Old High Kicking Self