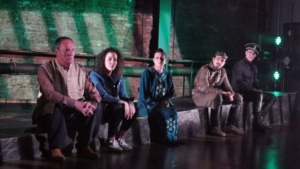 Benghazi Bergen – Belsen at La Mama succeeds in portraying the deep pain and deportation of a Libyan family from Benghazi to one of the most horrific concentration camps – Bergen-Belzen. A strong reminder of the tragedy of the Holocaust. 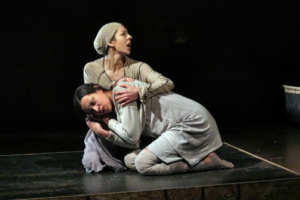 Narrated by Silvana Hajaj (Veracity Butcher), the main character of the play, who was transported to Bergen-Belsen concentration camp with her family. It is there that she meets and share her fate with Rebecca (Lilly Leah Azrielant), a Dutch Jew. They are locked together and forced to decide which one will die as punishment for stealing water. The decision is even harder since they are lovers and each is ready to sacrifice their life for the other. Silvana use the remaining time to tell the story of her family’s journey from Benghazi to Bergen-Belsen shifting between the past and the present in the concentration camp.

The play is well constructed and staged, though at times the direction by Michal Gamily is a bit amateurish, but overall it was well executed thanks to the touching performance of Lilly Leah Azrielant as Rebecca and Mohammad Bakri as Rebecca’s Father.
The lighting by Avi Yona Bueno is very effective and set the right mood in every scene. The music by composer Avi Belllei is powerful and emotionally charged. The costumes by Angela Wendt take away from the show as they are too predictable. Since most of the play revolve in the past under an aura of dream state, the look of ethereal ghost would have created more suspense.
Based on the novel of the same name by Yossi Sucary, Lahav Timor’s take is powerful and very well articulated. The play manages to grasp your full attention, until the very end. Unfortunately the show  resolve in the last five minutes and this feels a bit chaotic. It difficult to understand, since so much is said in such a short time.
I would strongly recommend this play and hope that the run will be extended. I left grateful for having seen it.
Benghazi Bergen-Belsen: La MaMa Theatre Downstairs, 66 East 4th Street, through April 9th.
Related ItemsAvi BellleiBenghaziBenghazi Bergen - BelsenFranco MoschettiholocaustLa MaMaLibyaLilly Leah AzrielantNewSilvana HajajVeracity Butcher and Lily Leah Azrielant
Off Broadway

Sally Struthers is Mrs. Peacock In Clue: On Stage
The Stars Come Out For Rose: Paris Jackson, Cynthia Erivo, Andrew Rannells and More