Theresa Rebeck’s Bernhardt/Hamlet, starring the luminescent Janet McTeer, is a master class in acting. McTeer plays renowned, 19th-century actress Sarah Bernhardt as she takes on the role of Hamlet. 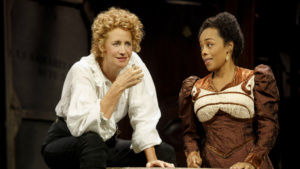 Thanks to Beowulf Boritt’s fabulous set, we are backstage of the Théâtre Sarah-Bernhardt, where we first see Bernhardt (McTeer) rehearsing Hamlet, not yet figuring out the role. She questions the meaning of Shakespeare’s words and the approach others have taken. She has her cast (Triney Sandoval and Aaron Costa Ganis) take different approaches to their entrances. McTeer looks amazing in her costume by Toni Leslie James, especially those thigh-high suede boots. Not only was I admiring them, but also so does Edmund Rostand (Jason Butler Harner) who is the married lover of Bernhardt. As the play goes on, her friends – including the painter Alphonse Mucha (Matthew Saldivar), her son Maurice (Nick Westrate), and critic Louis (Tony Carlin) – cannot see Bernhardt in the role, stating “Women playing men. It doesn’t work… It’s a disgusting idea.” Bernhard herself is also having problems, so she enlists Rostand to write a version with less of the iambic pentameter, but in doing this, Rostand starts to lose his soul. 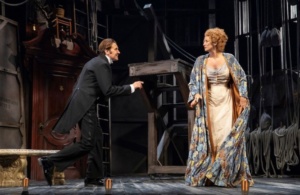 When Rostand’s wife, Rosamond (Ito Aghayere), brings to Bernhardt Cyrano de Bergerac claiming Rostand wrote it for her, Bernhardt takes offense after reading it. Both she and fellow actor Constant Coquelin (Dylan Baker) read the scenes as Bernhardt declares that she will no longer “play the ingénue” and “nobody upstages me.” She feels her lover does not understand her at all and that his wife knew this was the best revenge of all. Cyrano de Bergerac becomes a hit, but so does Sarah in Hamlet, which she goes on to repeat in the new art form movies, to which we see that performance on film. 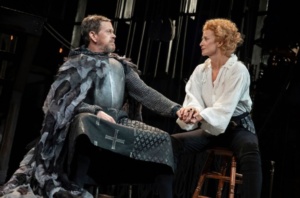 McTeer is sexy, proud, and transfixing as she commands the stage with every gesture and movement. Harner holds his own against this force of nature. Baker, Aghayere, and Saldivar shine in their roles, adding sensitivity and depth. 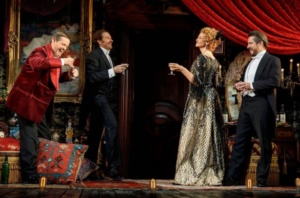 Moritz von Stuelpnagel’s (Hand to God) direction keeps this play at a fast clip and brings the best out of his cast and Ms. Rebeck’s play.

There are a lot of inaccuracies if you are going by history. As far as I know, Rostand and Bernhardt were not lovers. The French did not understand iambic pentameter and Hamlet was a translation of Shakespeare’s work into French, but do you care… not really. Rebeck’s play gives a voice to all the “PC” correct issues happening around us, and though some of us do like playing the ingénue, there are some of us who do not. Both need to be given a voice.

I found this play witty, engaging, and intelligent. I left the theatre engaged in conversation and that is the mark of a good play.

I can see McTeer, Ms. James, Mr. Boritt, and possibly Rebeck all getting applause during the award season.