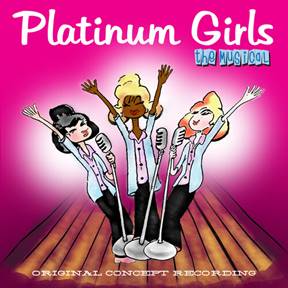 Broadway Records announced today that the original concept album for Platinum Girls – The Musical  will be released digitally and in stores on Friday, February 28, 2020. The album is currently available for pre-order at www.BroadwayRecords.comand will be available at Broadway Records’ booth at BroadwayCon.

Platinum Girls – The Musical is the story of three women: Elaine, Ruby Lee and Doris. Best of friends in high school who entered a songwriting contest and won, one hit song defined their friendship. Now, forty years later, as headliners at Brad’s Bowl N’ Roll, their claim to fame is less than ideal. Let’s hope their stars will align for them once again as they prepare for the comeback concert of their lives, hopefully overcoming their biggest obstacle: themselves. Starring Tony Award winner Beth Leavel (The Prom, The Drowsy Chaperone), Tony Award winner Debbie Gravitte(Jerome Robbins’ Broadway), and Tony nominee Brenda Braxton (Smokey Joe’s Cafe), and featuring Felicia Boswell, Carla Mongado and Natalie Weiss, the zany new musical is written by Andrew Beall, Russell Moss and Brad Zumwalt.

The album is produced by Matthais Winter, Andrew Beall and Russell Moss, executive produced by Doris Davenport, JStar and Jim and Pam Hicks. It is co-produced by Alan and Michelle Mahler and Carol Ostrow. Learn more about Platinum Girls at www.platinumgirlsthemusical.com

Genevieve Rafter KeddySeptember 21, 2022
Read More
Scroll for more
Tap
Patrick Page (Hadestown) to star in All the Devils Are Here – How Shakespeare Invented the Villain
The Go-Go’s Are Back On Tour and in a Showtime Documentary