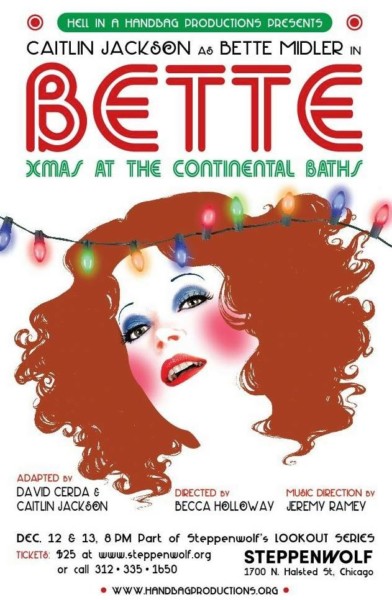 Bette Xmas at the Continental Baths – Back and Brazen As Ever

Bette Xmas at the Continental Baths – Back and Brazen As Ever 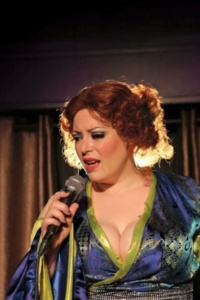 If you enjoy your holidays peppered with outlandish bawdy spice, look no further than Steppenwolf’s 1700 Lookout Series as they staging a Christmas themed return of Hell in a Handbag Productions’ Bette Xmas at the Continental Baths. The third time certainly is the charm as Caitlin Jackson is back, returning as the Divine Ms. M in her early days as a cabaret singer circa 1970. Before The Rose, Down and Out in Beverly Hills, Big Business, Golden Globes and Grammy Award-winning accolades, Bette Midler was a cabaret singer making a living performing in the gay NYC bathhouses for scores of adoring fans. Kept in tack, Jackson’s witty, racy one-liners and double entendres featured heavily in the two previous incarnations of this tribute re-imagining. Added to this mix on this go-around, several holiday classics, as well as the prestigious Steppenwolf name attached to the staging. Gone from the show are the towel clad twinks as backup, this time switched for two female supporting singers, Trixie and Laverne, as early versions of what would one day be the Staggering Harlettes, Bette’s legendary backup performers. Also joining in the fun, Musical Director/Arranger Jeremy Ramey, once again back as Bette’s early Arranger, a pre-fame Barry Manilow. Ramey’s currently pulling double duty this month, also serving as the musical director of Theo Ubique’s Alter Boyz, but it wouldn’t be the same without him. Directed and Choreographed by Becca Holloway, adapters David Cerda and Caitlin Jackson paint here with a very wide brush and equally forked tongue, the audience a delighted recipient of all of their outrageous work. 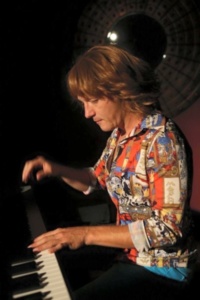 In each incarnation, the show’s success hinged on the casting of a convincing  Ms. Midler, and Hell in a Hangbag couldn’t ask for anyone more divine than one Ms. Caitlin Jackson. While not an exact physical twin, her mannerisms and cadence of speech effortlessly bring Bette to life for a sold-out, opening night performance. I would be remiss not to mention Jackson’s stellar voice, rough and edgy one moment, smooth as satin the next. She is the real deal. Opening with Midler’s signature hit “Friends” Jackson quipped to the audience “Jack Front may be nipping at your nose, but Jack Daniels is nipping at your liver” before tearing through an amended holiday classic “I Saw Daddy Kissing Santa Claus”. Vamping through some exhaustive choreography, she next shoulder shimmied her way through The Andrews Sisters “Chattanooga Choo Choo”. Slowing things down a bit, Jackson next belted the tragic torch song “Superstar” delivering the requisite brokenhearted pain injected through each melancholy “baby, baby, baby” of the chorus. 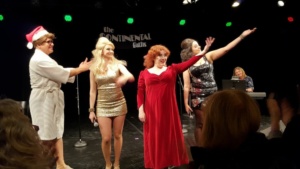 Aiding Bette in the show, her hairstylist and MC, Mr. Gerard (Ed Jones) and her two backup babes, Trixie (Sydney Genco, also currently featured in Hell’s other Windy City holiday Showcase, Rudolph The Red-Hosed Reindeer) and Laverne (Allison Petrillo). Requesting the audience “do not sing along as the harmonies are very tight, so don’t f*ck it up” the ladies slayed their way through “Boogie Woogie Bugle Boy” before Genco’s solo, a sultry “Santa Baby”. With the assistance from an unsuspecting audience member, Genco’s giggle inducing bump and grind routine was pointedly playful, both blithe and gay. While Bette stepped off the stage for a quick costume change, Trixie and Laverne insisted the audience join them for a sing-a-long this time, counting down all “Twelve Days of Christmas”, sardonically substituting the worlds of a male sex toy in lieu of “five golden rings”. 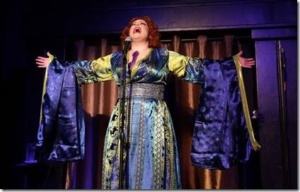 With Bette back, adorned in a long, red, velvet gown designed by Kate Setzer-Kamphausen, the girls kicked off a spirited rendition of Rosemary Clooney’s “Mambo Italiano” before entertaining with a sedate version of “Do You Wanna Dance”. Keeping the “X” in Xmas, the ladies preened about playing with “a lot of ding-dongs” during their Christmas medley featuring “Santa Claus is Coming to Town” and “Baby, Please Come Home”. Joking, Jackson cracked “Merry Christmas from this old Jew”, before the troupe embarked on the Midler classic “I Shall Be Released”. Bringing the show full circle, wrapping up where we began, once again with ‘Friends”.  This time, Jackson girlishly handing out presents that populated the set to patrons in the front row, sharing “don’t open them, they are just props!”  Stuffing our stockings with nothing but treats, Caitlin Jackson’s Bette is back and better than ever. With tongue-in-cheek playfulness, suggestively placing the Ho! Ho! Ho! in  the holidays, Hell in a Handbag and Jackson deliver the perfect adult themed holiday gift, just in time for Santa’s arrival. 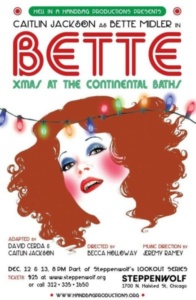 Hell in a Handbag Productions Presents Bette Xmas at the Continental Baths played as part of  Steppenwolf’s 1700 Lookout Series December 12 and 13, 2017 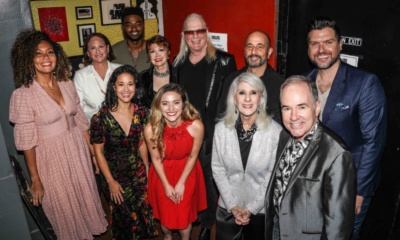 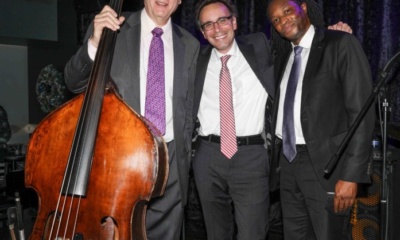 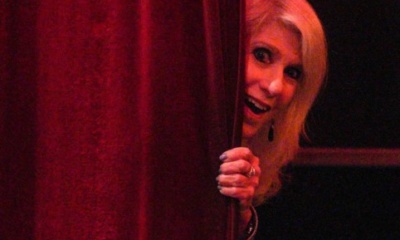 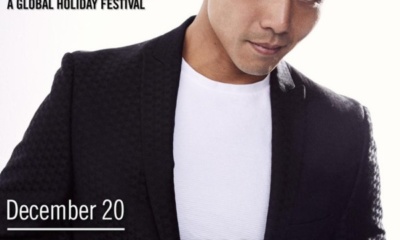