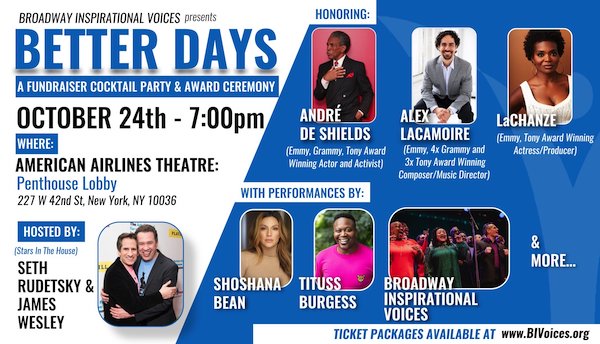 Tituss Burgess previously announced will no longer be in attendance due to schedule conflict.

In the intimate setting of the Roundabout Theatre Company’s American Airlines Theatre’s beautiful Penthouse Lobby, BIV supporters will have the opportunity to engage with honorees and performers throughout the evening. Not only will guests be bathed in BIV’s glorious musical sound and spirit, there will also be a chance to learn about our innovative Arts & Education programs, and have the opportunity to further support the work that BIV has wholeheartedly done for more than 25 years.

“At BIV, we celebrate resilience! Better Days is our first major fundraising event since 2020. With your help, BIV will continue to inspire more beautiful tomorrows. Come join the fun, and have your best day yet!”

Broadway Inspirational Voices (BIV) is a diverse community choir of Broadway professionals united to change lives through the power of music and service. BIV is committed to supporting and strengthening communities in need.

In 1994 more than 32,000 people died from AIDS or AIDS-related complications in the U.S. Many of those deaths came from within the Broadway community. As Broadway grappled with the loss of an entire generation of artists, Tony and Grammy-nominated Michael McElroy (founder of the Broadway Inspirational Voices) saw in the community a profound need for hope, unity, and inspiration. He envisioned an organization where professional performers would come together and volunteer their talents to provide comfort, joy, and the promise of a better day–and as a result, The Broadway Gospel Choir was born. This magical synergy of authentic Gospel soul and Broadway bravura was re-imagined as the Broadway Inspirational Voices (BIV) in 1999 and they have been the theatre community’s center of support and celebration ever since.  In 2019, The Tony Awards Administration Committee presented the Tony Honors for Excellence in the Theatre to four outstanding contributors to the Broadway industry, and Broadway Inspirational Voices was a recipient. The Tony Honor was a resounding endorsement of BIV’s enduring work and impact and in celebration of 25 years of service. In 2020, McElroy hand picked composer/singer Allen René Louis to become the new Artistic Director for BIV. BIV’s diverse membership has represented over 140 Broadway shows since its inception. For more information – and for ways to DONATE – go to www.BIVoices.org​. You can also find them on Facebook, Instagram, and Twitter at handle @BIVoices.