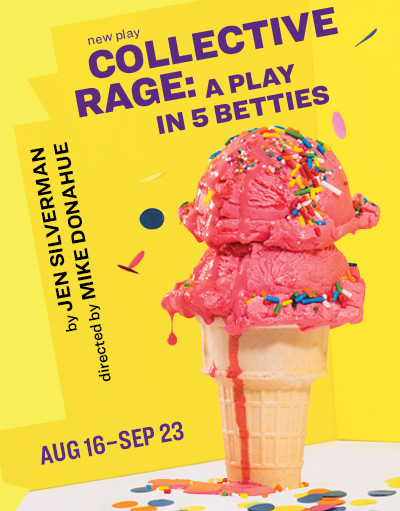 Celebrate Betty and Beer Night on Friday, October 5th for a special 10:30pm performance with a free pre-show beer reception (wine and soda available as well). Doors will open at 9:45, refreshments will not be allowed into the theater. Must be 21 with a valid ID to receive alcohol. All seats for this performance are priced at $35.00.

Collective Rage: A Play in 5 Betties continues its run through Sunday, October 7 at the Lucille Lortel Theatre (121 Christopher Street). For tickets and more info, visit www.MCCTheater.org

Meet five different women named Betty: one rich, one lonely, one charismatic, one lovelorn, and one who keeps working on her truck. Oh, and one has decided to stage a production of that play-within-a-play by… that old English guy, what’s his name? Ah, forget it. In Jen Silverman’s unpredictable comedy Collective Rage: A Play in 5 Betties, five women collide at the intersection of rage, love, and the “thea-tah,” provoking each other to take a look in the mirror and face the person they didn’t know they could be. Directed by Mike Donahue, this New York premiere invites us all to be a little braver, live a little louder, laugh a little harder, and unleash our inner Betty.

The full title of the play is Collective Rage: A Play In 5 Betties; In Essence, A Queer And Occasionally Hazardous Exploration; Do You Remember When You Were In Middle School And You Read About Shackleton And How He Explored The Antarctic? Imagine The Antarctic As A Pussy And It’s Sort Of Like That.

Collective Rage: A Play in 5 Betties originally premiered at Woolly Mammoth Theatre Company in Washington, DC in September 2016 under the direction of Mike Donahue which Broadway World called “[a perfect balance between the really absurd and the absurdly real,” and DC Metro Theater Arts said was, “Told with a singular, wholly original voice that evokes Albee, Suzan Lori-Parks, and even the poetic lyricism of Ntozake Shange. And it is very, very funny.”

MCC Theater broke ground on its first permanent home, a two-theater complex on West 52nd Street and 10th Avenue, on March 22, 2016. Set to open in November of 2018, the space will unite MCC’s diverse roster of programs under one roof for the first time in the company’s three-decade history. The new facility will be named The Robert W. Wilson MCC Theater Space in honor of the noted philanthropist following a multimillion dollar gift from The Robert W. Wilson Charitable Trust. The space will also allow MCC to expand its programming and establish it as a cultural anchor within the Hell’s Kitchen neighborhood. The project is funded by a public-private partnership between the Theater and the City of New York.

MCC is one of New York’s leading nonprofit Off-Broadway companies, driven by a mission to provoke conversations that have never happened and otherwise never would. Founded in 1986 as a collective of artists leading peer-based classes to support their own development as actors, writers and directors, the tenets of collaboration, education, and community are at the core of MCC Theater’s programming. One of the only theaters in the country led continuously by its founders, Artistic Directors Robert LuPone, Bernard Telsey, and William Cantler, MCC fulfills its mission through the production of world, American, and New York premiere plays and musicals that challenge artists and audiences to confront contemporary personal and social issues, and robust playwright development and education initiatives that foster the next generation of theater artists and students.

Blake West joined the company in 2006 as Executive Director. MCC will open its first permanent home in 2018 in Manhattan’s Hell’s Kitchen neighborhood, unifying the company’s activities under one roof for the first time and expanding its producing, artist development, and education programming.