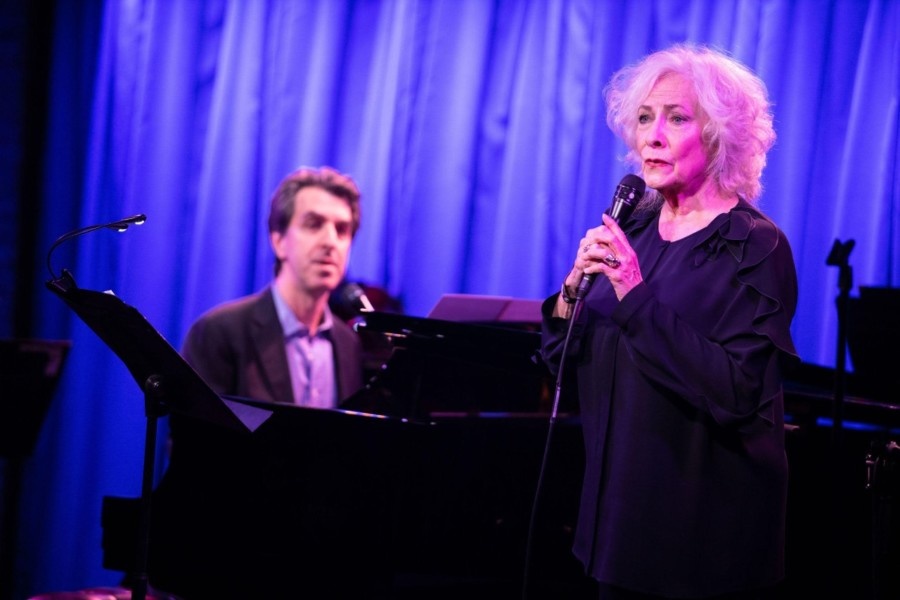 “Betty and I have been circling each other for twenty years, looking for the right opportunity to collaborate, and I can’t believe it’s finally here. The greatest joy of this residency has been the opportunity to make music with artists who I have long admired, and Betty is at the top of that list. I’ve written a brand-new song for Betty to premiere, and we’re going to explore a lot of other great stuff from my catalog (and a couple of other crazy surprises). It’ll be me, Betty, a group of amazing string players, and three glorious nights at the best music venue in New York.”

Starting off the night a duet of “Hope” from Mr. Brown’s 2018 album How We React and How We Recover.

“Another Life” from Bridges of Madison County and “What I Meant to Say,” a JRB song I have never heard, was brought to life by Ms. Buckley, whose musical stylings bring out a lyric to its fullest.

Next was Jason with another song from Bridges of Madison County “Wondering” and “The Old Red Hills of Georgia” from Parade. Surrounded by his band of musicians Todd Reynolds (an exquisite violin 1),Kiku Enomoto (violin 2), Monica Davis (viola), Khari Joyner (cello) and Randy Landau (upright/electric bass), the orchestra sounded fully fleshed out as it soared with JRB’s lush melodies.

“A Song About Your Gun” hit home,” which melted into a glorious arranged version of “Carefully Taught” and a thrilling “Cassandra” from Brown’s upcoming show The Connector.

Ms. Buckley recorded “Stars and The Moon” from Songs From a New World, on her 2001 album Stars and the Moon: Live at the Donmar. In 2011 she sang it on a National TV show and sang it again for us again last night. Her wry under tones made this a treat.

A couple of years ago, Jason Robert Brown was asked to write a song for a young girl, Josie, who was in treatment at the Ronald McDonald House. Josie’s bones had grown incorrectly and very weak, Brown explained. Brown went to meet Josie and her mom. Over multiple visits, Brown spoke to Josie, getting to know her taking pages of notes, but was unable to find the song in her story. As he exited Josie’s room after his final visit, Josie’s mother told Brown: “She just wants to make sure she’s not invisible.” This pop-rock song is on his album How We React and How We Recover, but this touching story, JRB’s compassion, touched our hearts.

From The Last Five Years the clever “Schmuel Song” had Ms. Buckley acting chops taking us on a comedic journey.

“Fifty Years Long,”was commissioned by a couple Brown didn’t know, to celebrate their 50th wedding anniversary and last night we were treated to beautiful rendition by JRB himself.

A brand new song for Betty “Love Again” was premiered and “All Things In Time” from JRB’s album of the same title finished the set in a rousing duet.

Longing to both perform West Side Story a fabulous version with Betty Buckley on “A Boy Like That” and JRB on “I Have A Love” was a thrilling encore.

There is still standing room for Sunday and Monday and this is a show which is truly a musical theatre delight.

There is another Jason Robert Brown concert with special guests December 14th, so get your tickets now, before they sell out.

Tickets can be purchased at subculturenewyork.com.