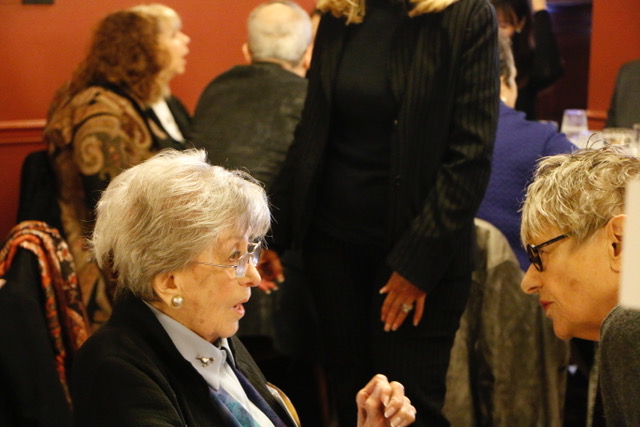 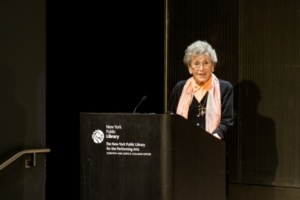 The League of Professional Theatre Women celebrated Betty Corwin last year with a Special Lifetime Achievement Award. Corwin was the visionary responsible for Archiving plays and theatre related events for the Archives at Lincoln Center Library of Performing Arts. 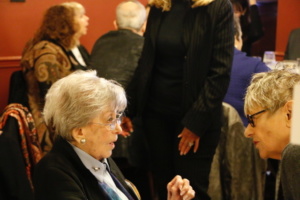 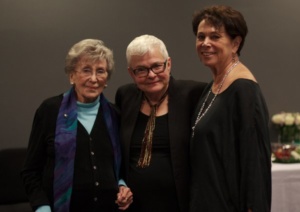 To get a glimpse into what Betty Corwin has done, I asked Peter Filichia if we could publish his section on Betty from his fascinating book Broadway MVPs: 1960-2010 – The Most Valuable Players of the Past 50 Seasons. He graciously agreed.

Anyone in the Broadway community who has ever been to Library of Performing Arts and watched a show owes a debt of gratitude to Ms. Corwin.

Les Miserables was the season’s big hit, to say the least. It may last forever. But Betty Corwin’s work will undoubtedly last forever.

Friday afternoon, August 22, 1986. The phone rings in Corwin’s office. Madeline Gilford is calling on behalf of Rags, the musical on which she’s associate producer. “We’re closing tomorrow,” she says.

Corwin is, of course, sad to hear it. Rags was one of the most anticipated Broadway musicals of the season. It had a book by Joseph (Fiddler on the Roof) Stein, music by Charles (Annie) Strouse and lyrics by Stephen (Godspell) Schwartz. Who’d have predicted only four performances?

Gilford wanted more than condolences from Corwin; she wanted her to green-light the taping of Rags for Theater on Film and Tape Archive in the Billy Rose Theater Collection at the New York Public Library for the Performing Arts.

“I said to Madeline, ‘Are you crazy?’” Corwin recalls. “It’s a Friday in summer. I can never get all the permissions that quickly.”

Before any taping can proceed, Corwin must get approvals from Actors Equity, The American Federation of Musicians, The Dramatists Guild, The International Alliance of Theatrical Stage Employees, The Society of Stage Directors and Choreographers and United Scenic Artists – not to mention from everyone associated with the production.

On the small chance that she could reach the necessary people (on a day when many were already leaving for the Hamptons or the Jersey Shore), how many would give permission? And even if they did, was there enough time to hire a video truck, a video director, camera and sound personnel, and others who’d coordinate with the stage producers and their crews?

Nevertheless, Corwin got it done. Rags now sits in the TOFT Collection (as The Theater on Film and Tape Archive is known). “That taping allowed many people to see it,” Corwin says. “It may well have led to its getting five Tony nominations.”

Corwin could have been any season’s MVP since 1970-1971, when she started to have as many Broadway and off-Broadway shows taped. But her yeoman work in rescuing Rags from complete extinction is the reason she’s the Most Valuable Player of this season.

Her first taping was the now-forgotten 1970 off-Broadway musical Golden Bat, a Japanese import. But its producers were Broadway heavyweights: Kermit (The Diary of Anne Frank) Bloomgarden and Arthur (A Thousand Clowns) Cantor. They were amenable to Corwin’s noble experiment.

They’d known her for years. As a young woman, Corwin worked in many producers’ offices, which resulted in her getting free tickets to Broadway. “Laurette Taylor in The Glass Menagerie, all those wonderful Katherine Cornell performances,” she recalls. “I was distraught that they couldn’t be seen again.”

Although Corwin admits that agent Helen Harvey gave her the idea to tape shows, Corwin did the work and drew up a formal proposal in 1969. “I started calling up the unions,” she says. “Getting everyone to agree took almost two years. We did Golden Bat on a $200 budget and used the cheapest cameraman in town.”

Corwin found she’d have to abide by a number of caveats. “I had to promise that we’d protect the tapes from piracy; we’d only let them be viewed at the library; and they would be viewed under supervision.”

Not every Broadway show is routinely taped. “We look for outstanding quality of some kind – writing, acting, directing or design; qualities of uniqueness which may have historical importance; a balance among types and styles of theater; revivals; unusual stagings; important cast changes; and shows that demonstrate theatrical traditions of other countries. We even tape mime and choreography that don’t naturally lend themselves to other forms of documentation.”

Ethnic and minority concerns are important, too. “When Diahann Carroll took over in Agnes of God, we taped it with her, even though we had already done it with Elizabeth Ashley. We usually don’t tape the same production twice – we barely have the money to tape it once – but we thought this was a significant performance.”

There’s a five-figure cost to taping every show, and that’s with simply a two-camera taping. For The Phantom of the Opera and Miss Saigon, three would be used, and for Jerome Robbins’ Broadway, four.

“We make the cameras see as your eyes would,” she says. “We always start with a wide shot so that you can view the entire panorama as the audience saw it. Later, we zoom in for important close-ups. We try to tape a Wednesday matinee, so in case we run into technical problems, our crew can stay and try again that night.”

Corwin retired in September, 2000, but not before taping nearly 3,000 Broadway, off-Broadway and regional productions. “We have the record-breaking performance of A Chorus Line. And if you wanted to go to the other end of the spectrum, we have 20 minutes of Moose Murders,” she says, referring to the infamous 1983 one-performance flop.

But how did Moose Murders meet the criteria of “outstanding quality? And does only 20 minutes exist because Corwin stopped the taping when she saw how terrible the show was? “No,” she says. “Joel Siegel, the critic for ABC News, would give us all the press reels that he got, and that was one of them. Believe me, otherwise we wouldn’t have taped it.”

Genevieve Rafter KeddyAugust 6, 2022
Read More
Scroll for more
Tap
We Will Not Have to Try and Remember Harvey Schmidt the Composer of The Fantasticks
What’s The Buzz Jesus Christ Superstar Live Meets The Press: Part 4