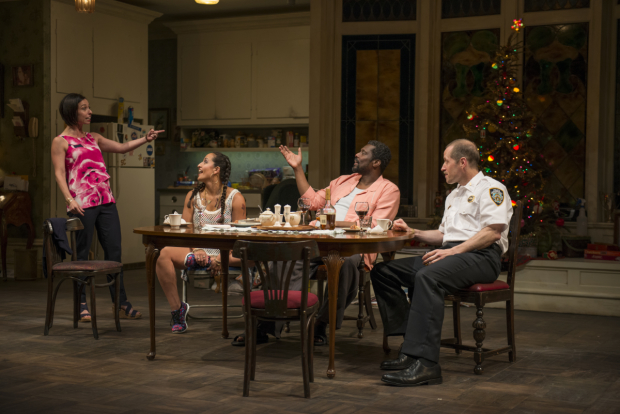 Between Riverside and Crazy – Drama Torn From The Headlines

Between Riverside and Crazy – Drama Torn From The Headlines 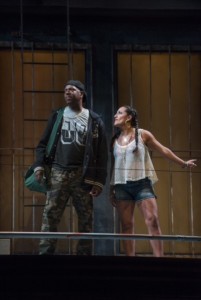 It is all about timing. For example, who could have predicted a play written back in 2014, like the most recent dramedy by Stephen Adly Guirgis, Between Riverside and Crazy, now playing at Steppenwolf Theatre Company’s main stage, would be so politically charged and topical just a short two years later? This 2015 Pulitzer Prize-winning piece, directed by ensemble member Yasen Peyankov, negotiates the explosively controversial fine line between #blacklivesmatters and #bluelivesmatter, a full two years before either hashtags ever existed. For those who travel to the theater to escape the ever increasing harsh reality of the evening news and the world we live in, this piece’s first act will prove uncomfortably challenging to sit through. I empathically implore you to stay for the much lighter in tone and more comically driven second act. As a writer, Stephen Adly Guirgis often proves himself the champion of the underdog. This is the man who scribed Jesus Hopped the ‘A’ Train and The Motherf**ker with the Hat for goodness sake. So sit back and enjoy this dark comedy, not for an all encompassing answer to what ails society, but for the powerful mirror reflecting human behavior, which I believe was the playwright’s chief intention. 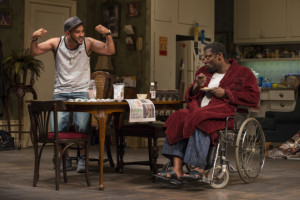 Our story centers around Walter “Pops” Washington (a remarkable Eamonn Walker) an everyman retired cop who lives with his adult son in a coveted, rent-controlled apartment in Riverside Drive, New York.  It is clear from the remarkably detail set, design by Collette Pollard, that Washington and his family have resided there since 1978. Pops has also opened his home to a trio of additional characters. Oswaldo (Victor Almanzar) an ex-con with a freshly devoted commitment to living clean, Junior (James Vincent Meredith) Pops’  jailbird, unemployed son, with a questionable source of income. “Don’t open this box, Pops” the patriarch is fiercely warned.  Finally, Lulu (Elena Marisa Flores) Junior’s loudmouth girlfriend, with the outward ambition of becoming an accountant, but with the demeanor of a street walker and a possible baby on the way. Add to this, a pestered, habitually barking dog, that we hear but never see. Between the introduction of this troika of sketchy housemates, and a daily dose of Jack Daniel’s spiked coffee for breakfast, we discover “Pops” Washington is an African-American 30-year NYPD veteran who was also the victim of an malicious, intentional shooting by a uniformed cop, while Pops was off duty cop in an afterhours seedy bar. Pops proclaimed he “shot everything black in the whole joint and somehow didn’t hit anything white.” Enraged and demanding justice, Washington logically sued, then has continued to refused every settlement offered to him from the city, because each deal settlement offered to him stipulated “no fault” in the shooting. This reality “word pill” Washington found too bitter to swallow. Fast forwarding eight years, the case is still pending. Sadly for “Pops,” the media has moved on, his story has lost its initial sizzle, and the offers from the city become less and less. What hasn’t weathered with time, Washington’s rage for the situation? 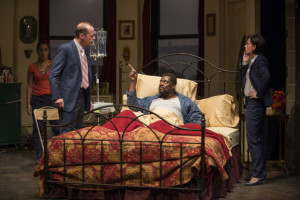 As the story unfolds, no one is what they appear to be. Pops’ previous partner, Detective O’Conner (Audrey Francis) and her new fiancé, Lt. Caro (Steppenwolf staple Tim Hopper) attempt to use her friendship and history with Washington to manipulate him to sign the final attempt at a financial settlement. It would seem Pops would maintain his rent controlled apartment and would also wipe out his son’s criminal record if he signs. A tempting offer, peppered with ripped-from –the-headlines dialog, “We’re all cops here, Walter. No Black. No White. Just Blue.” Ouch. All shades are reflected in Crazy’s never-ending barrage of deception, racism, and bureaucracy as plot twists, which fuels this engaging and topical dark comedy. Speaking of comedy, keep your eye out for Act 2’s visiting Church Lady (Lily Mojekwu) a vivacious and duplicitous volunteer, sent to engaged a lonely old shut in, but who will leave you howling in the isles. Needless to show, this show is very adult in concept, content and execution. 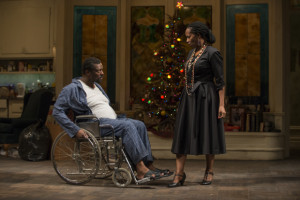 Between Riverside and Crazy is not an easy play to sit through, purposely so, yet I found it highly engaging, stunningly provocative, completely unapologetic, at times frightening, purposely challenging, then laugh out loud hilarious. It is remarkable how Steppenwolf continues to have it’s collective finger pointed both firmly and directly on the pulse of what is happening in the world. Their creative clairvoyance absolutely astounds. Add another remarkably performed and engaging jewel to their crown of great and brazen story telling. Between Riverside and Crazy sizzles with electricity from beginning to end. While the story’s actually ending stretches credibility paper thin, I dare anyone to not smile at Pops’ outcome.

Steppenwolf Theatre Company’s Between Riverside and Crazy is now playing through August 21, 2016

Magda KatzMay 24, 2022
Read More
Scroll for more
Tap
Daniel Radcliffe and Privacy Show Us There Is None
A Class Act When The Subject Speaks Volumes