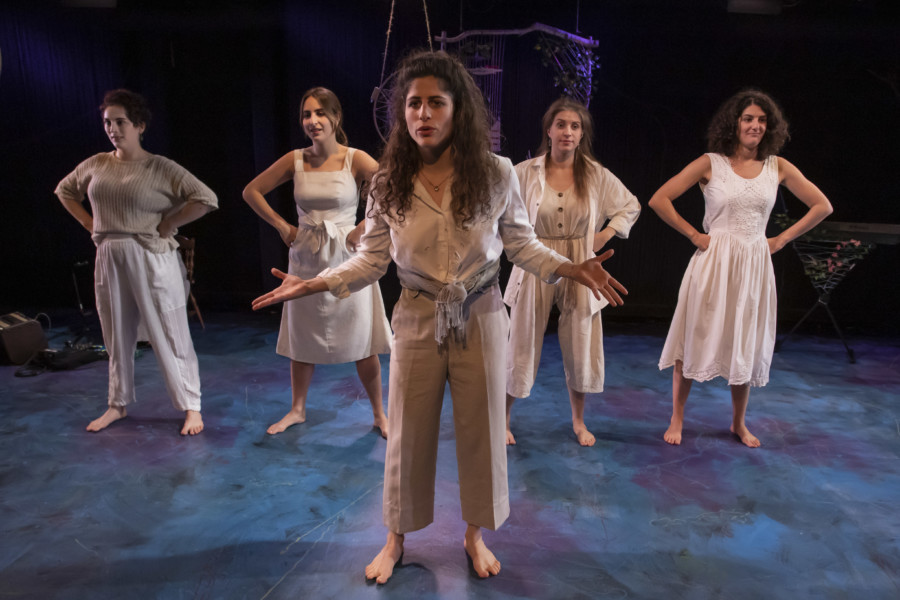 Between the Threads: Womanhood and Identity

Between the Threads: Womanhood and Identity

Between the Threads (Jewish Women Project) begins with five chairs and five women dressed in neutral tones and bare feet; over the course of the next hour, these women share their experience of being Jewish. Conceived and directed by Coral Cohen, this unique production explores how religious and social culture shapes and influences identity, specifically womanhood.

It felt less like a performance and more like a personal presentation of how Judaism shapes feminine identity. The five performers and co-creators, Hannah Goldman, Luisa Muhr, Lea Kalisch, Laura Lassy Townsend and Daniella Seidl, told their stories through monologues, scenes and metaphoric movement. In several sections of the show, audio clips of interviews with women of the previous generation aided in grounding the stories.

The clear thematic sections demonstrated the elements and obstacles a Jewish woman encounters: bat mitzvah, marriage, the effects of the mechitzah, the consequences of menstruation. There were a couple of sections that were performed in a drastically different way than the rest and so they stand out: the poetic performance about the feminine versions of God’s names and a section in which a performer breaks the fourth wall entirely to engage the audience in what felt like an surreal stand-up routine.

Scenic design by Lauren Barber was an intriguing set of dreamcatcher-like pieces of art – hoops and squares with yarn to create images – flowers, green leaves. The floor was a cosmic mural of purple and blue with bright yarn like lines without purpose or destination.

The lighting design by Elizabeth M. Stewart showed off the fluid movement of the actors’ bodies throughout the piece. Since the costumes (designed by Johanna Pan) were a neutral color, the color and intensity of the lights heavily influenced the mood of the production – second only to the music. Zoe Aqua, who composed original music for this production, is an exceptional violinist and her contribution is essential to the presentation and interpretation of the stories that were told.

What is best about the piece is that it recognizes in truth and practice that the personal story is also the social and cultural story, the political story, and the historical story.