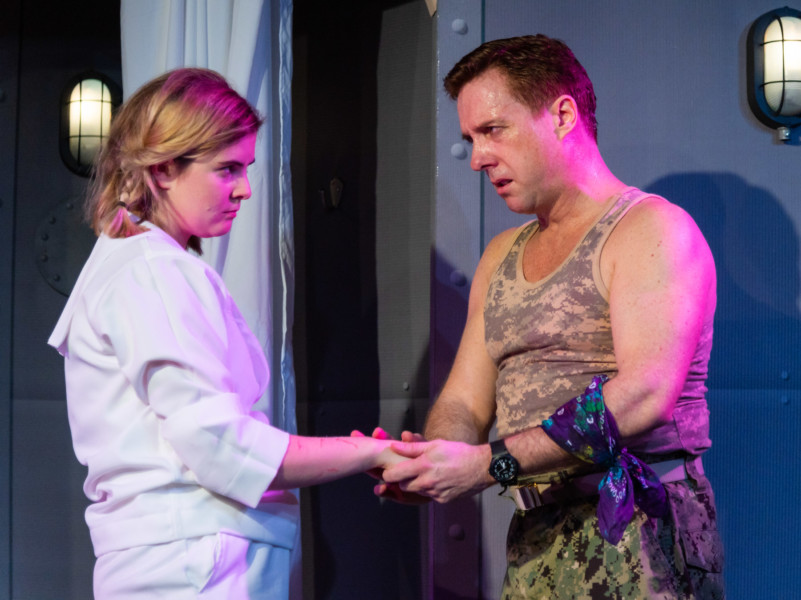 The play follows a naval seaman Matt (Tristan Biber), who smuggles his girlfriend Felicia (McKenna Harrington) aboard a Military ship. When his sadistic commanding officer Alex, (a fabulous Christopher Sutton (God Shows Up, Spamalot)), discovers the breach, he blackmails the two. He gets Felicia, who will fulfill his desires with what twisted fantasy’s he can concoct, when Matt is away. Alex threatens sexual violence, but this turns out to be a cat and mouse play where nothing is as it seems. Themes of peodophilia, murder, rape, child abuse, drug use and suicide all hang in the balance.

Mastrosimone, language is vulgar and crude, but the show has a dark edge that could be intriguing in a film. The show however needs to be fleshed out, because a lot of things make no sense here. In the dialogue Felicia reads to be 15/ 16. If she was 18, homeless and living in a dog house nobody would care. That means Matt has smuggled an underage girl onto a boat that will cross international waters. This is a Federal offense. Not only that, but he is at least 22, so what the playwright has missed… is this twist! Mastrosimone, also makes Matt from Naval background. How does he not know the complications? His lines make him completely ignorant of any and all complications. Felicia, comes from a drug fueled family who had to of molested her, sold her for crack or worse. This is not some innocent. These girls grow up way before their time. They learn to manipulate and we see none of that in Ms. Harrington’s performance. She is aggressive as is Alex and these two should not start off with all barrels rolling. Felicia in the beginning should be scared, shy and a little innocent even if it is all an act. Also there was no chemistry between any of them.

I blame a lot of the acting choices on the director, William Roudebush. This play needs subtlety, not laughter. In a sense this play does not know what it wants to be. Thankfully Mr. Sutton instinctively knows how to play this role. If there had been more of a lead up to who this character is, it really would have been a spectacular performance.