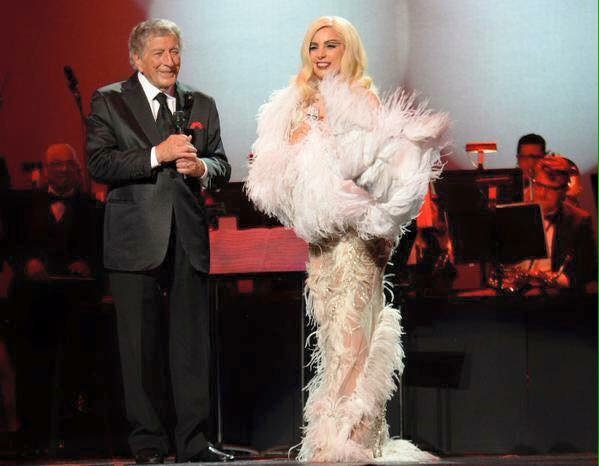 Bewitched, Bothered and Bewildered by Bennett and Gaga

Bewitched, Bothered and Bewildered by Bennett and Gaga 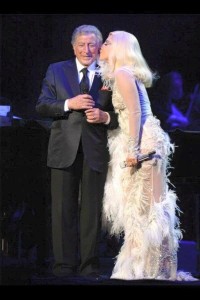 It might have been a drizzling Friday evening in the Northern Chicago suburbs, however the talent center stage was nothing short of white hot. Grammy Award winning legends, 88 year old Tony Bennett and 29 year old Lady Gaga, the musical May/December pairing of the moment, whose sweet serenades closed their generation gap in fantastic melodic merriment, enjoyed by a sold out crowd.  As a matter of fact, this was the fastest selling show in the venue’s 111 year history.  Impressive for a duo who, on paper, seem quite contradictory.  He of the classic tailor suits, vintage velvet voice and statesmanlike silver hair and she, the wild siren, Mother Monster of the modern digital age, whose outlandish costuming often overshadows her remarkable musical capabilities. While the songs may have struck a keenly nostalgic chord with their combined audiences,  the Jazz Age for a new millennium sounded fantastic.  What a celebration of classic American songwriters including George Gershwin, Louis Armstrong, Cole Porter, Richard Rodgers, Duke Ellington, Irving Berlin, Cab Calloway and Frank Sinatra.  How could they possibly go wrong with this impressive songbook? 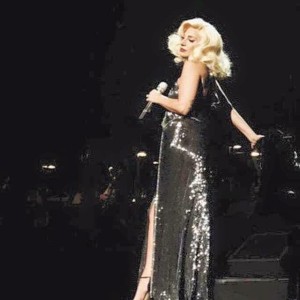 Backed by a 14 piece orchestra and attired in an iridescent lavender beaded, floor-length gown, Gaga began the evening twirling her exaggerated sleeves next to the dapper, suit wearing icon.  Kicking off the night with a rousing rendition of Anything Goes and Cheek to Cheek, both artists appeared to be having the time of their lives.  Slow dancing in one another’s arms during They All Laughed earned the duo the first of several standing ovations.  While the orchestrations and big band backup were clearly Bennett’s milieu, Gaga met her mentor note for note.  While she darted off for the first of what would be seven attention-grabbing costume changes, Bennett wowed the crowd with two solo standards, Stranger in Paradise and Sing You Sinners.  Returning to the stage in a black and white, floor length beaded gown Gaga looking ever the lady, and with Bennett by her side, they next entertained with Nature Boy, Watch What Happens, and The Good Life. 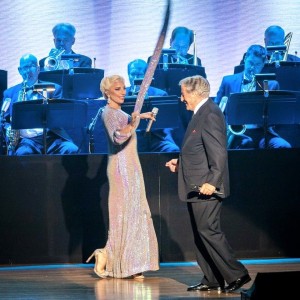 Sharing with the audience she has sung jazz “since I was a little girl”  Lady Gaga’s third costume change was to a men’s navy two piece suit with conspicuous red platform stiletto boots. Strutting around the stage, one hand in her pocket,  Gaga belted out a vengeful Bang Bang (My Baby Shot Me Down) then relaxed her signature edge for the sumptuous Rodgers and Hart’s classic Bewitched, Bothered and Bewildered.  Not to be out down, Tony took the stage next for a series of solo classics including  Firefly, the Charlie Chaplin classic Smile, When You’re Smiling, Steppin’ Out With My Baby and For Once In My Life.  Keeping up with this roaring twenties atmosphere, Gaga reappeared in a knee length, black flapper dress with a feathered head piece as they crooned I Won’t Dance. Tony finished the set with a fetching rendition of The Lady’s in Love With You. 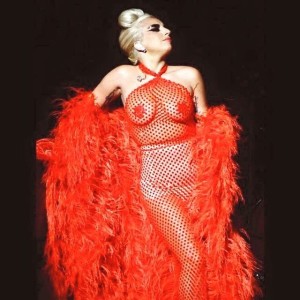 It is not a Lady Gaga show until a few jaws drop, and drop they did as she brazenly appeared in a floor length red mesh & sequin gown, red pasties strategically covering her breasts and finished the look off with a dramatic red feathered cape. “What in the hell does she have on” said the 83 year old man standing directly behind me.  Trust me, I was the lone “Little Monster” in the sea of Bennett fans surrounding me.  Before beginning her next number,  Gaga made reference to the historic announcement earlier in the day from the Supreme Court, who voted to legally recognize Same-Sex marriages in all 50 states.  The Born This Way vocalist announced  “I know it may be a touchy subject, but let’s touch it.  Because what a victory!  What a special day for love.  So this is for you, for fighting.  And also for Tony Bennett, who fought for the civil rights of so many.” After inspiring the crowd, Gaga rewarded the energized audience with I Can’t Give You Anything But Love, Baby and Lush Life.  Bennett returned with I’ve Got The World On A String and In the Wee Small Hours of the Morning. 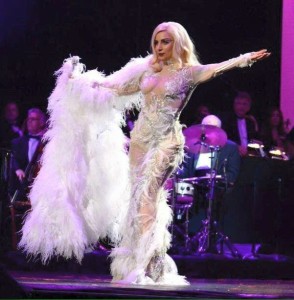 Channeling the old Hollywood regalia of Marilyn Monroe in Gentleman Prefer Blondes, Gaga next emerged wearing a cotton candy pink cocktail dress with an exaggerated bow at her waist to perform Edith Piaf’s La Vie En Rose, in French no less, with such operatic grandeur, it brought to mind her triumphant ode to The Sound Of Music a few months earlier at the Academy Awards.  Say what you will about her multiple tattoos and outlandish costuming, this woman can truly sing and earned herself another standing ovation from a crowd, clearly impressed with what they just experienced. Bennett subsequently returned to warble through How Do You Keep The Music Playing? 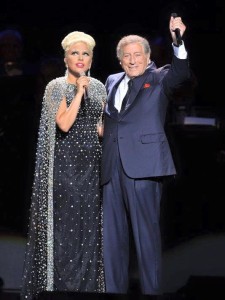 To duet on the classic Let’s Face The Music And Dance, Gaga channeled Jean Harlow in a body hugging, low-cut black gown with a long belt she twirled with vigor throughout the number.   Before she went to change again, she treated the audience to Ev’ry Time We Say Goodbye.  Bennett next shared with the onlookers his appreciation for her talent, regaled the audience with stories of his misadventures with the Chairman of the Board, Frank Sinatra, including the fact they were “best friends” and wrapped this vignette with the benchmarks Who Cares?, Fly Me To The Moon, Chicago, and his definitive rendition of  I Left My Heart In San Francisco. 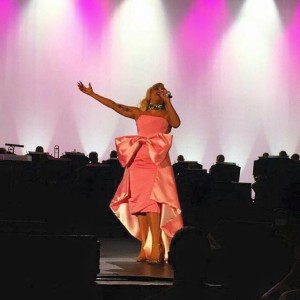 Saving the eye-popping best for last, Lady Gaga’s final costume change of the evening was into a sheer, sleek, custom tailored Roberto Cavalli gown with plumage appliques and a coordinating white feather stole. The twosome quipped back and fourth in a charming version of Rodger and Hart’s The Lady Is A Tramp and finished their nearly two hour set with It Don’t Mean A Thing (If It Ain’t Got That Swing). Two very different performers with authentic chemistry and great appreciation for one another’s remarkable talent, inspiring the best in and from of one another.  Serving up a set of Jazz Age romance with a long stream of vanished era standards, Bennett and Gaga were a class act of two, raising the bar with longevity, flair and mutual respect. The adoring audience was all the better for it. 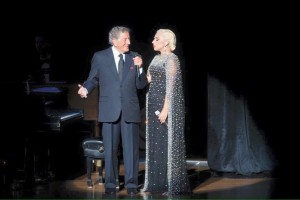 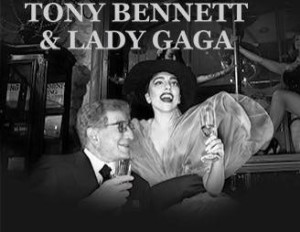