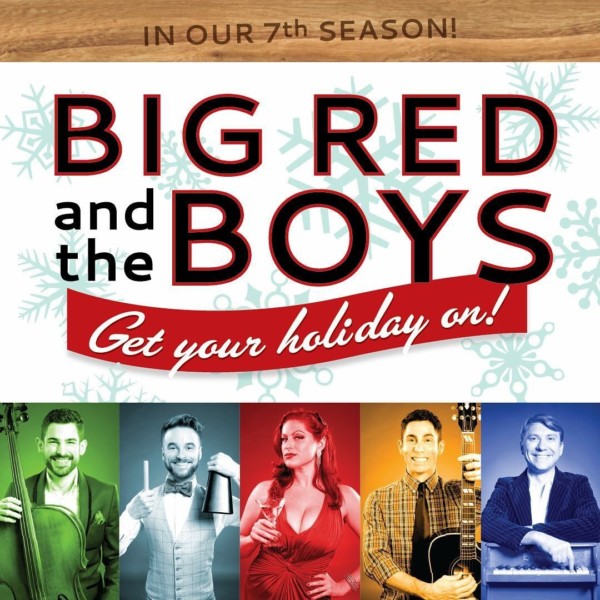 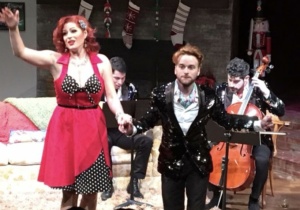 Proving once again that Santa’s naughty list is so much more appealing, Chicago’s busiest powerhouse performer, Meghan Murphy, is back, headlining her annual holiday themed cabaret, Big Red and the Boys, returning for its seventh season. This year alone, Murphy played a sold-out run at Feinstein’s 54 Below in New York, originated a role in Delaware Theater Company’s world premiere Something Wicked This Way Comes and played starring roles in Chicagoland’s Smokey Joe’s Cafe at Drury Lane while stealing every scene she was in as Tanya in Marriott’s raucous rendition of Mamma Mia! Now that the calendar is down to its final page of 2017, Murphy and the Boys are headed back out on a three city tour, including Chicago, Philadelphia and New York, sharing their sassy and saucy brand of holiday reverie. 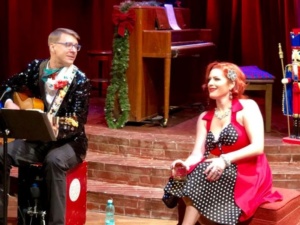 Opening with Madonna’s early hit Holiday, this seasonal showcase was anything but a retread of stale Christmas classics. Proving once again that naughty is far more entertaining than nice, our buxom mistress of ceremonies adorned herself in a red, black and white polka-dot dress; part I Love Lucy, part Jessica Rabbit. This funky femme fatale, serving here as director/producer/costume designer and headliner, best described as Karen Walker meets Johnnie Walker, with legs for days punctuating her unique brand of sass, class and verve. Then there is her voice; raw, soulful, spellbinding and completely intoxicating.

Who are the Boys joining on Big Red’s journey, you may ask? They are complied of guitarist and song writer John Francisco, performer, soon to be seen on Broadway in the return of Angels in America, Patrick Andrews, bass player and songwriter TJ Chernick and musician, musical director and singer Nick Davio. Festooned in matching black sequin jackets and trousers, The Boys took the lead during the song “It’s a Jolly Holiday with Big Red”, a Mary Poppins inspired riff, during which Murphy preened and posed center stage ala Marilyn Monroe. Returning to the microphone, she commanded attention during “This Girl” a theme song with lyrics inspired by her likes of a smokey eye, a random night, making out with a Windy City cab driver, and her joy in being surrounded by a crew of glittery gays. Check, check and check! 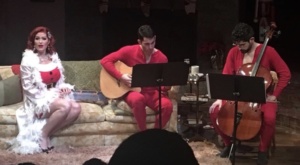 Next up, a couple covers, including the spunky Grace Garland song “Single Mingle Jingle” and Petula Clark’s ode to urban living “Downtown”. Each of the Boys were also allowed to shine, as Francisco entertained with mellow solos, “You Don’t Get To Go Home” stopping mid-song to speak directly to the audience with an impassioned plea to watch a marathon of “The Great British Bake Off” as well as crooning “It’s Just Not Christmas” and the deeply personal “Every Loyal, Everlasting Love” duet with paramour Andrews. If Francisco brought the sentimentality, Chernick provided chutzpah during his one man “I Ain’t Going Home for Christmas, If It Ain’t With You”. Andrew’s spoken word personal essay expressed the complexities found in the all too relatable dysfunctional family drama of the holidays with a hook borrowed from “Do You Hear What I Hear.” Saving the giggles for last, Davio brought it home with “Brutal Chicago Winter.” 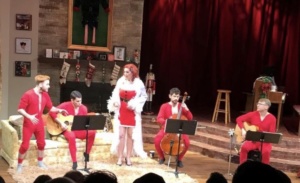 The quintet entertained with a subtle, acoustic version of Dolly Parton’s “Hard Candy Christmas” before a brief question and answer session between the performers. What do you want for Christmas inquired Murphy? Andrews answer dominated as he quipped “smoke a lot of weed, have a lot of sex and see (Disney Pixar’s latest animated hit film) Coco“.  Climbing on top of the piano, Murphy next musically inquired “Santa, What Do Bad Girls Get For Christmas?” Well, I don’t know about Bad Girls, but the audience was gifted to another array of Murphy’s emotional, electric and powerful vocal runs. 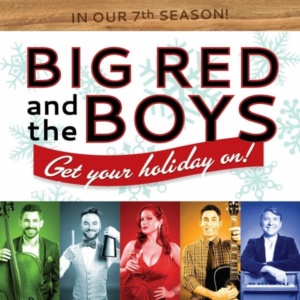 On a personal note, this is my third time seeing Big Red and the Boys and I was anxiously awaiting their annual rendition of Destiny Child’s “Eight Days of Christmas”. While the catwalk strutting choreography was significantly toned down this year, they did Beyonce and the women of DC proud. After a quick costume change, this time to a Christmas themed nightie, with long white robe with requisite feather trim, much more Mistress Claus than Mrs. Claus, Murphy was ready to wind down. Not to be outdone, the Boys returned to the stage with a costume change of their own, matching red onesie union suit pajamas.

The tight harmonies during the Christmas classic “Silent Night” and lovely “Snow on Snow on Snow” proved this show and its troupe are far more than gimmicky schtick. This celebration of chosen family was evident throughout the sincere chemistry and affinity the players obviously have for and about one another. This modern day gay icon also paid homage to one of her own, singing Judy Garland’s “Have Yourself a Merry Little Christmas” from the 1944 musical Meet Me in St. Louis. This ditty soothed the mostly gay audience in attendance. Wrapping up the show with the Donny Hathaway holiday hit “This Christmas” Big Red and the Boys proved itself, once again, a gift chocked full of unlimited returns. Both shows quickly sold out in Chicago, so like Santa, treat yourself to this holiday cabaret while you still can.