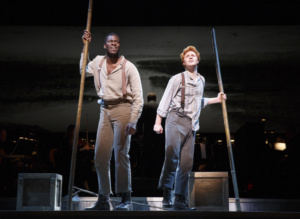 Kyle Scatliffe and Nicholas Barasch All photos by Joan Marcus. 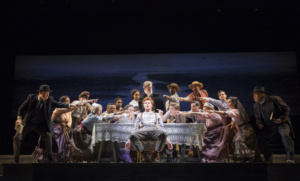 One of the joys of the New York City Center Encores! series is the opportunity to see shows that I had missed seeing on the Broadway stage. And last night was no exception. Big River, a musical with a book by William Hauptman and music and lyrics by Roger Miller, feels like it was written many moons ago. It has an old nostalgic sound and flair to it that caused me to be quite surprised by its conception date. The show was first produced on Broadway in 1985 at the Eugene O’Neill Theatre after first playing at the American Repertory Theater in Cambridge, MA and The La Jolla Playhouse, San Diego in 1984.  The 1985 premiere ran for a total of 1,005 performances, and went on to win 7 Tony Awards including Best Musical, book, score, and direction (Des McAnuff), with a cast that included Tony winner Ron Richardson, Rene Auberjonois, and John Goodman. (As you can tell, besides being a theatre addict, I am also a theatre history junkie as well.) There was also a well-received revival brought to Broadway by the same theatre company that staged the wonderful Spring Awakening last season, a company that features both deaf and hearing actors performing together.  In that show, which was also honored with a Tony Award, a character, Mark Twain (Daniel H. Jenkins) was added providing the voice of Huck who was portrayed by a deaf actor, Tyrone Giordano. 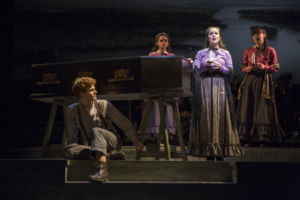 The Encores! production of Big River feels as twangy and bluegrass as can be, filled with melodic moments of beauty and history. It starts out floating on the charm and winning character of Huck Finn, played with the perfect balance of fire and freckles by the golden voiced Nicholas Barasch (@NickBarasch).  The story is simple at first. An adventurous journey by this infamous teenage boy, stealing himself away from morality and conventionalism accompanied by a runaway slave, Jim (a superbly voiced Kyle Scatliffe @KyleScatliffe). I must admit that I never read any of these tales of teenage mischief that resides in Mark Twain’s 1884 classic, the ‘Adventures of Huckleberry Finn’ and the earlier ‘The Adventures of Tom Sawyer’ (1876). I think it never made it onto the reading list in my Canadian school so the story was as fresh as the Mississippi River air. Centered on the young Huckleberry Finn, I can imagine that this musical only works if the lead can carry this show on his broad shoulders.  And Barasch is just the young man for it.  Just as he was in the gorgeous She Loves Me last year at the Roundabout Studio 54 Theatre, his charm and smile easily convinces us to jump on board that raft, and gladly set sail down the Big River with him and Scatliffe (most recently playing Harpo in The Color Purple). Barasch’s numerous songs, especially the beautiful duet with Scatliffe, “River in the Rain”, the rousing “Muddy Water”, and the gorgeous “Leavin’s Not the Only Way to Go” with the added lovely voiced Lauren Worsham (Tony nominated for originating the role, Phoebe in A Gentleman’s Guide to Love and Murder) leaves us thrilled to have come along for the ride. 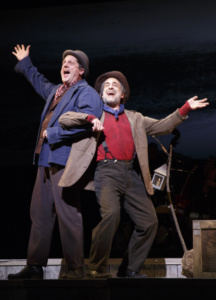 Everyone they encounter from the moment they escape from St. Petersburg, Missouri, and on that journey down the Mississippi River are equally as well voiced and lovingly portrayed.  The wonderful harmonies of “You Oughta Be Here With Me” by Lauren Worsham, Gizel Jimenez, and Megan Masako Haley are soul enriching. It is also marvelous to see Annie Golden (who I loved so much in the film version of Hair, and on Netflix in Orange is the New Black) playing the holier than thou Miss Watson, along side the sweet Widow Douglas (Cass Morgan; Memphis) and company in the fun and festive opening number, “Do Ya Wanna Go To Heaven?”. The two less than holier than thou, the con-men, the ‘King’ (David Pittu) and the ‘Duke’ (Christopher Sieber) that Huck and Jim meet as they float down the river are fabulously funny and inventive.  I did love the muddled use of Shakespearean text by Sieber. The writing and the delivery of his soliloquy is hilarious and very inventive, and the fun vaudevillian flair of the song “When the Sun Goes Down in the South” made me smile, but their shtick does tend to wear thin after a while.

Epitomized by these two schemers, this story is also filled with references to slavery and freedom. At points throughout the show, the discomfort of the racist words spoken can be felt throughout the New York City Center audience. There are some odd moments within this musical when the African American cast members are ushered out to sing some magnificent gospel numbers for what seems no reason at all within the story line other than the thinnest of threads.  As wonderful as these numbers are; ‘How Blest We Are’ sung spectacularly by Katherine A. Guy and company and the wonderful ‘The Crossing’ by Patrice Covington, a more modern telling of this tale may have found a stronger way to bind these moments to the plot and the structure. 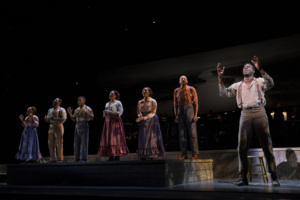 Act II has a very different feeling than the straightforward journey of Act I. The twists and turns are as rapid as the ever-changing mood of the songs and scenes. Tom Sawyer, by an overly exuberant Charlie Franklin (The Book of Mormon), adds a level of hokey play that sometimes feels surprisingly incongruent to what’s happening around him and the others. Huck and Tom while discussing a scheme to help free Jim from being locked up and chained inside a shed, is surprisingly light and silly (I blame Hauptman’s book here). It is followed abruptly by a powerful song of yearning for freedom and equality by Jim, ‘Free at Last’, majestically sung by Scatliffe.  This moment is also another example of the utilitarian use of a line of black gospel singers to fill out the sound.  Filing on and off the stage in a line, the action feels clumsy in its staging as the procession feels condescending to these gifted performers, shifting them all to minor players, before the story swings quickly back to the two boys, Huck and Tom and their madcap adventures. 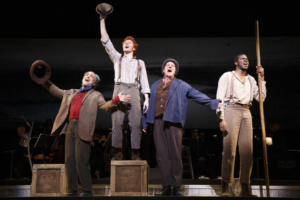 It’s a surprise to be honest, as the show feels much more old fashioned in its story and in it’s telling (director: Lear deBessonet). I doubt this story would be told in the same manner and style if written today, as it was in the 80’s. That doesn’t say it is without charm, as it is overflowing with talent and spectacular musical moments, but the weakness lies in the book, not the music or lyrics. The book attempts to address racism and slavery, and it does in many thoughtful ways, but seems to minimize Jim’s role in comparison to the teenage boys. Reconfigured today, Jim’s story would perhaps gain more depth and agency. In some ways, I feel like I’m tip toeing around this, but it was hard to deny the discomfort at moments in the telling of this story. Musically, the score is spectacularly handled by the Encores! Orchestra (music director: Rob Berman; original orchestrations: Steven Margoshes, Danny Troob) and the true joy in spending time with Huck and Jim on the Mississippi River is the country and bluegrass songs of Big River. In that respect, there is strength and vitality. I’d happily float down the river with this crew any day.