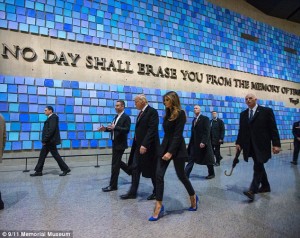 The candidates are in New York. Donald Trump visited the 9/11 memorial on Saturday along with wife Melania, arriving shortly after noon spending about 30 minutes touring the museum in lower Manhattan. Trump was so moved he made a $100,000 donation, according to a museum official. Trump was quiet during the visit, speaking to none of the press who were invited along for the tour by his campaign. The tour was given by museum President and CEO Joe Daniels, along with other museum officials and representatives of the NYPD and PAPD.

Democratic presidential candidate, Sen. Bernie Sanders, I-Vt., and his wife Jane in Times Square on their way to see the Broadway show Hamilton.

There are 291 delegates, the biggest number to date, up for grabs in the New York Democratic primary on April 19th.

Meanwhile Mayor de Blasio was on the Ham4Ham show.