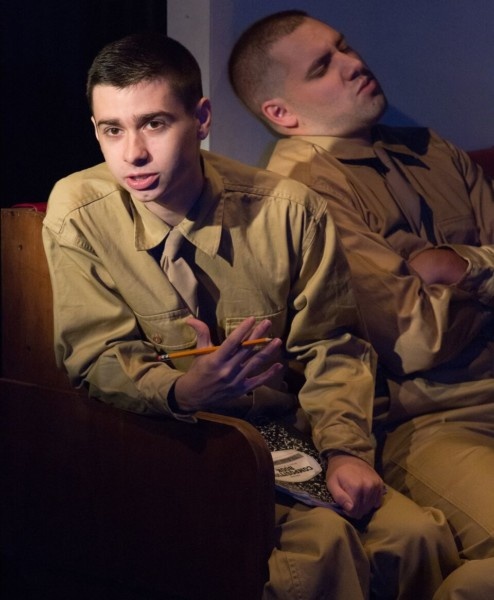 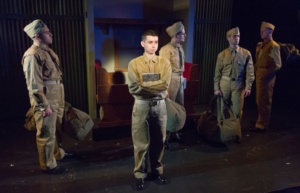 I can think of no more fitting memorial to the memory of the late, great playwright, Neil Simon, Broadway’s own, than this production of “Biloxi Blues” which opened last night at Act II Playhouse. A semi-autobiographical reminiscence of Simon’s early days in the U. S. Army during World War II, it is masterfully directed by Artistic Director, Tony Braithwaite. 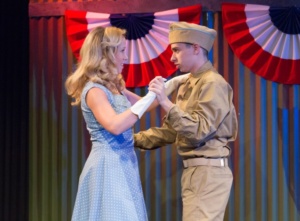 “Biloxi Blues” is the second part of Simon’s Eugene trilogy (the first chapter being, “Brighton Beach Memoirs” and the third being, “Broadway Bound”). It premiered at the Ahmanson Theatre, in Los Angeles, then ran at the Curan Theatre in San Francisco and made its debut on Broadway at the Neil Simon Theatre in 1985 winning the Tony Award for Best Play. 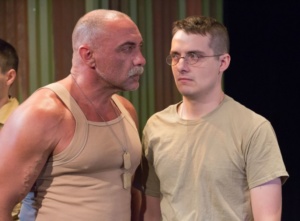 Eugene Morris Jerome is an eighteen year old, innocent from Brooklyn who is drafted into the army and sent to Biloxi, Mississippi for his basic training.  There he encounters a diverse platoon of soldiers along with the eccentric platoon leader Sgt. Merwin J. Toomey. Befriending the intelligent and defiant soldier Arnold Epstein, Eugene witnesses the struggle for power between his friend and the overbearing Sgt. Toomey. Along the way, Eugene manages to lose his virginity and fall in love – but with two very different women.

What is most remarkable about this production is the ensemble acting. What is also notable is that every joke lands in the most satisfying way due in no small part to Mr. Braithwaite’s impeccable ear for comic timing. But the production doesn’t fall short in its grasp on the essential bit of heart that is at the core of the play and most importantly at the core of all of Simon’s characters.  We love to laugh at them because we love them with all their flaws and foibles.

Years ago when I was an undergrad at Penn State, I had a professor (whose name I have justly forgotten) who claimed that Neil Simon was nothing more than a cheap, hack playwright. I was too timid to speak out against this uninformed pedant, but had I had the forethought to speak – I would have said, “No, sir, you are wrong.  Mr. Simon is the Moliere of our day. His characters are funny and human at the same time.”  And now, he is regarded as one of the most prolific and performed playwrights in the world and has received more Academy Award and Tony nominations than any other writer.  So “smoke on your pipe and put that in,” professor.

Luke Brandt is most poignant as the irritatingly rational Arnold Epstein. At first he seems aloof and weak but as the play progresses we see his indefatigable determination to stand by his principles and is transformed into a hero in our eyes. D. J. Gleason, the youngest member of the cast, as Eugene Jerome, is nebbishy, goofy, funny and totally disarming as our budding writer-to- be. Andrew Criss inhabits the role of the gung-ho Sgt. Toomey.  He is frighteningly domineering with his prodigious muscular anatomy and the almost crazed look in his eyes when he is humiliating his men. Heather Plank is sexy and funny as the prostitute, Rowena, who only works on the weekends as opposed to Anne Wechsler’s sweet and very virtuous Daisy Hannigan, Eugene’s first real love. And Zachary J. Chiero’s physical comedy adds to the merriment.

The set, by Adam Riggar, is a clever configuration of what looks like corrugated steel boxes that are slid around by members of the cast. They conveniently create a train compartment, a barracks and a hooker’s cozy digs. And the incidental music by John Stovicek will put you in a nostalgic 1940’s mood.  If you’re a Neil Simon fan, you will love this production.  If you’re not a Simon fan, you will be one after seeing this show.

RossJanuary 2, 2023
Read More
Scroll for more
Tap
Broadway and Off Broadway Openings in September
Qurrat Ann Kadwani Brings Rape Out Into The Open in Intrusion