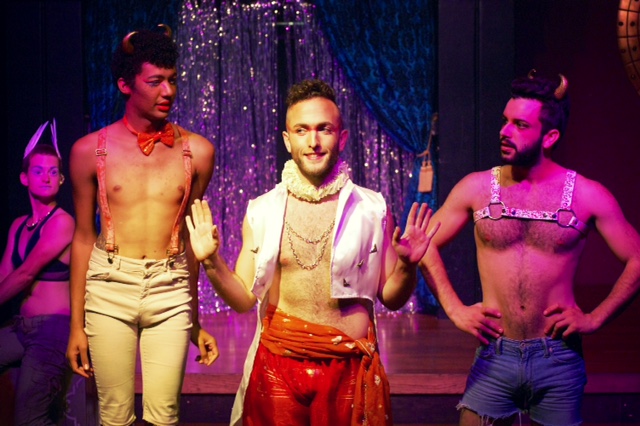 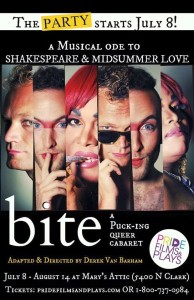 From the moment I took my seat as the pulsating tones of Ke$ha’s “Take It Off” played over the loud speakers, I knew instantly this would not be a traditional night of Shakespearean theater. Adapted and directed by Derek Van Barham, Bite A Pucking Queer Cabaret is a whimsical musical ode to Shakespeare’s A Midsummer Night’s Dream that plays much like a frozen margarita you could get at the bar. Light, fun, silly, and satisfying for about an hour. 85 minutes to be exact. This mindless mayhem on display is heavy on the silly and firmly reinforced by thick layers of camp. After sifting for meaning through all of the senseless acts of violence that have plagued our country and community over the last month, a night of light and silly cabaret might be just what the doctor order. Shakespeare told through the tracks of contemporary artists including Nikki Minaj, Robyn, The Scissor Sisters,  Janelle Monae and Britney Spears. What’s not to like?  With capricious music direction from Jeff Bouthiette, bump and grind, titillating choreography from both Derek Van Barham & Christopher Young and a cast of almost a dozen talented singers, you’ll be glad you took a Bite too. 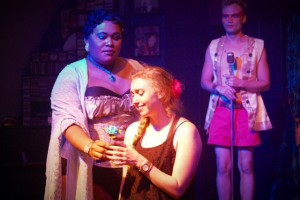 The central story focuses around the tumultuous relationship between the leaders of the fairies, King Oberon (Kevin Webb) and Titania (Raymond K. Cleveland) his glamazon Drag Queen companion. From the narrator, Puck (Nathan Maurice Cooper) electric opening number, a rousing rendition of Adam Lambert’s “For Your Entertainment,” it is definitive this fairy world drew principal inspiration from the HBO mythical hit, True Blood and it’s season four carnival of fairy folk. Quite literally stumbling upon them, four mortals who wander up the stairs and become unwitting playthings for the mystics. It’s a magical and mythical game of love, lust and deception, centuries in the making. As this is a Pride Films & Play production, a curious game of sexuality hop-scotch is front and center. Girls kiss girls, boys dance with boys, girls date boys who date boys dating girls. This virtual pu-pu platter of sexual desires is more giggle inducing than in your face shocking, so feel free to bring your friends without anyone feeling awkward. Since this is a cabaret pop-rock ode to A Midsummer Night’s Dream with a definitive LGBTQ twist, the voices on display is the real show’s highlight.  Webb’s Oberon has two dynamite solos, “Years & Years” by King & “She’s My Man” from The Scissor Sisters. Cleveland’s drag persona has an early on lip-sync to Q.U.E.E.N by Janelle Monae, but gets to actually sing “Dream a Little Dream of Me” by The Mamas & The Papas at the end. With such quality vocals on display, the lip-sync could easily be discarded. Cleveland is up to the challenge to sing live, wonderfully matched, toe to toe, if not eye to eye, by Webb. 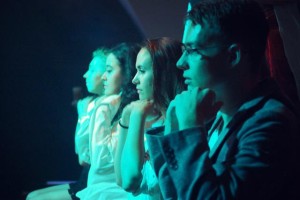 As the four mortals, Liz (Caitlin Aase) is a red headed, gravity defying vixen, who gets a folding chair solo striptease, set to a scaled down version of “Toxic” by Britney Spears. Mia (Melanie Vitaterna) is the requisite party girl blonde, initially attracted to the eccentricity of the fairies of the forest. “Why does everyone always mistreat the pretty one” she inquires, the object of two women’s lustful affections. She gets one of the evening’s biggest laughs when it is time for her solo ballad. The first few chords of Frozen’ s “Let It Go” begins to play before she actually settles on Alessia Cara’s “Here.” Demi (Jennifer Ledesma) gets the single with the most emotional resonance of the entire evening, Little Big Town’s “Girl Crush.”  Poor Demi is attracted to a woman already taken by someone else. Traveling in her wake, Lin (Will Kazda) a gay, straight guy who gets to shine during Robyn’s “Call Your Girlfriend” while he pines for Demi and laments the fact everyone thinks he is gay. The enchanted supporting characters get to play their own version of Fairy-oke as well, punctuated by “The Night is Still Young” from Nicki Minaj. Rivals Moth (David Mor) the requisite hot guy in daisy duke cut off shorts and a harness, easily the most natural dancer of the entire troupe, and Cobweb (Jacob Gilchrist) who has a powerful voice hidden in that lanky body, teetering on Lady Gaga inspired silver platform heels, play a humorous game of microphone one-upmanship. Clearly, those who “Drink together, Twink together.” This is a show where everybody swings and sings both ways. 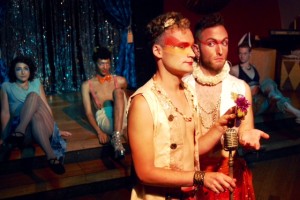 Scenic and costume designer Brad Caleb Lee makes the most of the intimate performance space with minimalistic set pieces. As for costuming, there is enough skin revealed to almost qualify as burlesque, the exaggerated make up and costumes stretched to fit the apparent shoestring budget. G “Max” Maxin IV lighting and projection design impressive for the space as well.  The remaining script is full of tantalizing and teasing one liners. “You call me Queen, but treat me like Jester.” The shade is firmly on display. I must be honest, there is a naughty joke about Sheryl Crow’s music being a buzzkill that had me laughing much louder than it should have. Something for everyone, indeed. Sorry Sheryl. 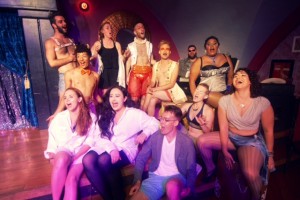 The evening also afforded Pride Films and Plays Executive Director, David Zak, the ideal opportunity to announce the new permanent home for future Pride Films and Plays, christened the Pride Arts Center in Uptown. Productions will start to play there in January 2017, but I don’t want PFP’s exciting news to pull focus from the opening of Bite. While not perfect, and purposely lacking polish, Bite proved a great deal of fun. I was not “drunk on love and fairy magic” like a few of the participating characters, I certainly enjoyed myself. If I may paraphrase from the theme song from the classic cartoon, The Flintstones, at BITE A Pucking Queer Cabaret,  “you’ll have a gay old time.”