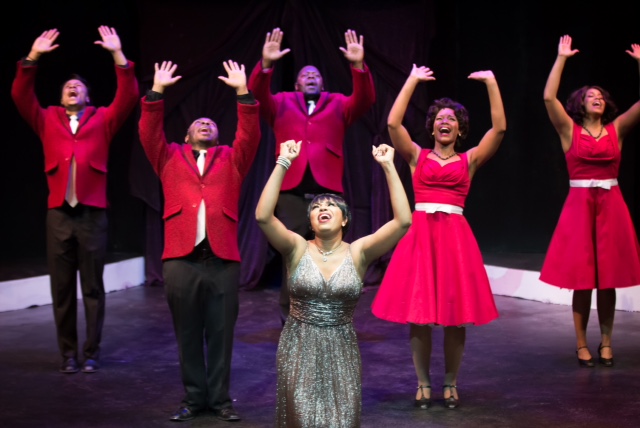 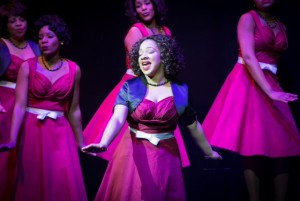 What a way to kick off a 40th anniversary celebration! The customary 40th anniversary gift may traditionally be ruby, however the Black Ensemble Theater is celebrating with pure gold! Golden hits sung by a multi-generational company of purely platinum powerful singers.  Running in repertory for a month and a half, Doo Wop Shoo Bop and Those Sensational Soulful ‘60s are both shows which inspired spontaneous audience clapping, voluntary sing-a-longs and impulsive dancing in the isles in jubilant celebration. Doo Wop Shoo Bop, written by Jackie Taylor and Jimmy Tillman and Those Sensational Soulful ‘60s written exclusively by Jackie Taylor were both directed by Ms. Taylor as well.  Busy lady. The initial two productions of a seven show season, cements the passionate dedication the Black Ensemble Theater has for raising the soul, spirt and ceiling, through song. Joining Ms. Taylor on the journey, Robert Reddrick served as the Musical Director for both productions, set design crafted by Caswell James and period accurate costuming from Ruthanne Swanson. Both shows share the same cast including David Simmons, Rashawn Thompson, Jessica Seals, Kylah Frye, Rueben Echoles, Melanie McCullough, Shari Addison, Kyle Smith, Direoce Junirs, Kenny Davis, Kora Kishe Green, Renelle Nichols and Theo Huff. Individually given the opportunity to shine during notable solo numbers, then rejoined the team ensemble in numerous impressive melodies. 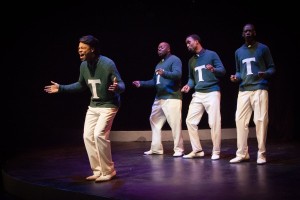 Doo Wop Shoo Bop celebrated the iconic groups of the 1950’s including The Platters, The Drifters and the Chantels. The script initially reminded the audience this was a decade where there was no plague of drugs and neighborhood violence which cripples many Chicago neighborhoods today. A simpler time, Doo Wop was a cleverly disguised musical history lesson of black culture. The sumptuous soundtrack included Fat’s Domino’s “I’m Walking,” The Platters gorgeous “Smoke Gets In Your Eyes,” and The Five Satins remarkable “In The Still Of The Night.” Peppering the musical walk down memory lane, essential factoids included details like The Shirelles were the first female group to sell over 1 million records. Sadly it wasn’t all bubble gum and smiles. We also learned black musicians were often not credited for their song writing and often white artists stole black artists’ material with no penalty. Atlantic Records was affectionately called “The House that Ruth Built” although Ruth Brown was left to ask, where is MY money?  Initially referred to as “Race Music,” “Doo Wop” was the essential  rebranding of “Rhythm and Blues” to expand the audience base for black artists. Added exposer, airplay and, of course, money were the primary motivating factors involved. Being the Black Ensemble Theater, this is not a dreary history lesson, but a triumphant event to pay homage to the pioneers of soul.  Dressed in coordinating red and black costumes, this rambunctious show included elements of gospel, blues and soul which included the songs “Mr. Lee,” “Dedicated to the One I Love,”  “Goodnight Sweetheart, Goodnight,”  “I Only Have Eyes For You,” and  “Why Do Fools Fall In Love?” Nostalgia has never sounded so good. 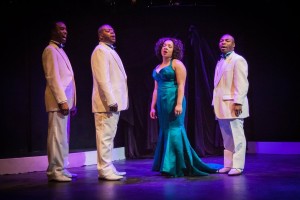 By contrast, the 1960’s was a much more turbulent time. As a result to the assassination of John F. Kennedy and Martin Luther King Jr. political protest and defiance became the norm. The soundtrack of Those Sensational Soulful ‘60s was a high energy remembrance of that era.  Using music as a healing force, we were treated to songs by The Temptations, The Four Tops, Sam Cooke, Otis Redding and Mary Wells. Adorned initially in costumes of chocolate brown, this revue took us to the pop charts, Las Vegas and then to Church, respectively. “Mr. Excitement” Jackie Wilson (the dynamite Kyle Smith) electrified the stage with his resilient voice and commanding dance moves. Melanie McCullough’s take on the Ike and Tina Turner classic “Proud Mary” was electrifying, and the authoritative Shari Addison blew the roof of the joint with her inspiring take on Aretha Franklin’s “Respect” and Patti LaBelle’s “Somewhere Over the Rainbow.” Show stopping emotional resonance brought audience members to their feet repeatedly. Other musical highlights included the Supremes’ “Stop In The Name OF Love,” Etta James’ “At Last,” “Twisting The Night Away,” “My Guy,” “Mack The Knife,” “Try A Little Tenderness,” “Will You Still Love Me Tomorrow,”  “Mr. Postman,” “Sitting on the Dock of the Bay” and “He’s A Rebel.”  Proving Soul doesn’t have a color, Those Sensational Soulful ‘60s soars. 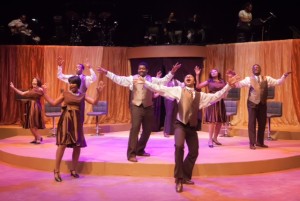 What an exhilarating kick off to their 40th anniversary celebration, the Black Ensemble Theater has certainly doubled their audience’s pleasure, presenting two tribute showcases set to the addictive soundtrack of a generation. While I am a child of the seventies (please let there be a ‘70s disco tribute in the works) this festival of songs from the fifties and sixties will truly delight all ages. With rollicking choreography and rapturous vocal talent, the tough decision for an audience member will be which show to see? This is not a Sophie’s Choice moment people, go see them both. Doo Wop Shoo Bop and Those Sensational Soulful ‘60s are equally toe-tapping, spirit-raising, smile inducing, hits! G. H. HARDINGDecember 2, 2022
Read More
Scroll for more
Tap
Heathers the Musical – Never Has Mean-Spiritedness Madness Been So Much Fun!
The New York Pops The Music of John Williams: From Spielberg to Star Wars