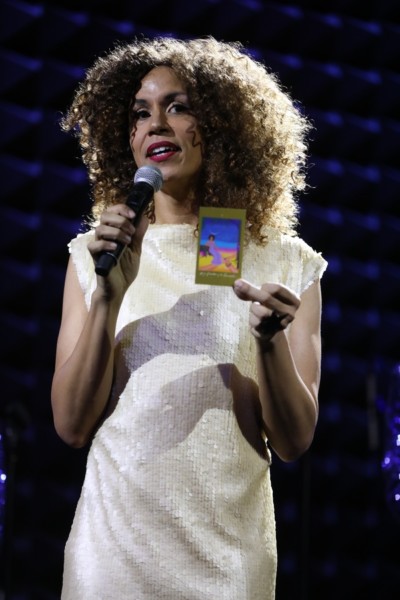 Black Light Asks Us To Enter a Church of The Soul

Black Light Asks Us To Enter a Church of The Soul 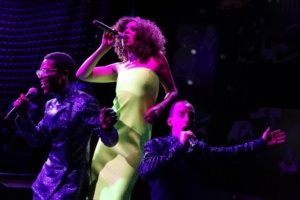 We hear the sound of a distant twinkling of bells. Then through the darkness we hear……………… 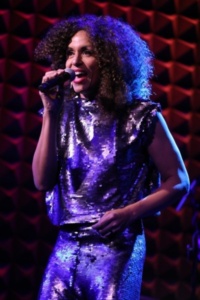 Enter Jomama Jones into her temple of Black Light at Joe’s Pub. Dress in sequins Jomanna and her backup singers (Trevor Bachman, Vuyo Sotashe), bring to mind a enlightened Hedwig for today. Speaking in double entendre’s, we are passing from the age of introspective and me, to an enlightened age of thought process. Jomama  seems to be channeling and has a courage born from her soul within. We are in church or a way station, before we are judged, not only by ourselves, but a higher power. 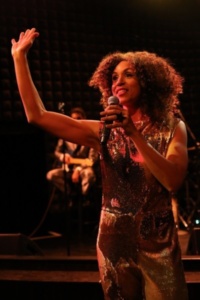 Billed as “a musical revival for turbulent times,” this show takes on the political climate, hate and prejudice as Jomama shines her transformative light. Jomama is Daniel Alexander Jones’s alter ego or an extension of who he was always meant to be. Through this piece, it feels as if there could be a healing. It is a spiritual journey we all take together. We are told Jomama’s stories of hurt, pain, supernovas and her southern Aunt Cleotha, who was much more on point than at first she thought. In her musings we are shown how we judge people on looks and how being in skin has nerve endings, that can fray. All of this is done in gold, purple, lemon, black, creme and gray sequined gowns created by the fabulous Oana Botez , with heels that tower so that Jomama eventually becomes barefoot. 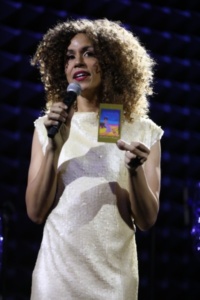 Black Light was created by Jones and features original music by Jomama, Laura Jean Anderson, Bobby Halvorson, Dylan Meek and Josh Quat (guitar and vocals). The music has inflections of Prince, Sade, Diana Ross and Tina Turner, backed by a four-person band that is outer worldly. Samora Abayomi Pinderhughes musical direction is heavenly. Jones’s two backup singers bring falsetto angelic voices sent from a time that has not come. These two singers are superb and offer much more than back-up. I wish that there had been a CD for purchase.

Jones who was rather brilliant in last years Duat at Soho Rep is a phenom, who has to be seen to appreciated. As Jomama she is a goddess who teaches with heart, sings with transcendental powers and offers her truth.

You will leave the theatre feeling refreshed, rejuvenating with a belief that their is hope for human kind. Will we make the ultimate sacrifice and  give something up? Will we stand up for whats right despite the challenges?

What if I told you
Our hearts must break?
And in breaking they might open.
To let the light out and in.
And maybe, just maybe, they will become some new terrain. Some shape and feeling we have not known before.

What if I told you we must be brave?
Do you know the root of the word courage? Cour – heart.
To lead with the heart.
Our new hearts.