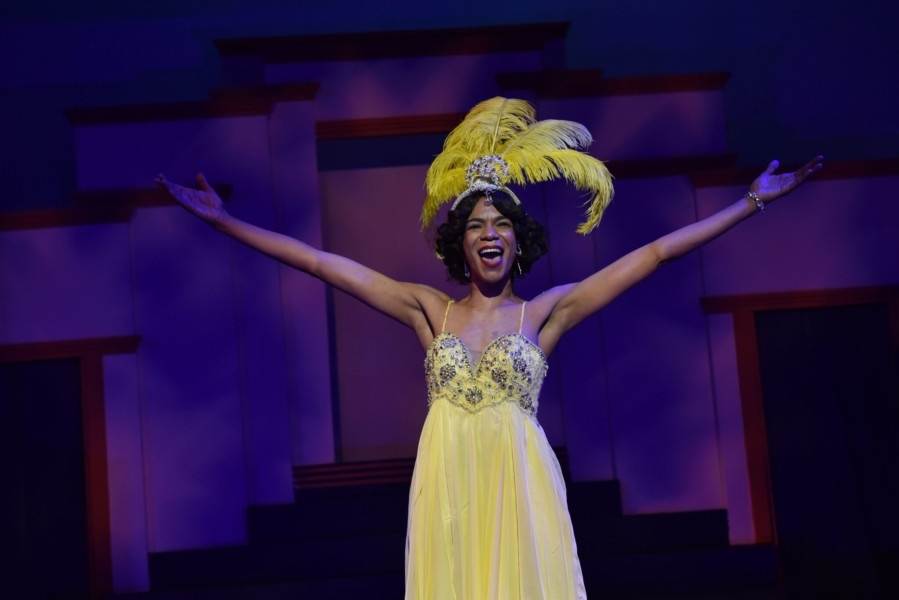 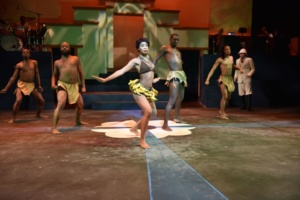 Sexy, sensational, and often scandalous, The Black Ensemble Theater continues their Dance Theater Season with a wildly enjoyable world premiere musical, Black Pearl: A Tribute to Josephine Baker. For those not in the know, Baker was a remarkably successful cabaret performer, known the world over beginning in the 1920’s. By today’s standards, Josephine was a one of a kind amalgamation of Madonna, Beyoncé, Lady Gaga, Rosa Parks, Elizabeth Taylor and Angelina Jolie, years before any of these pioneering women were even conceived. Born Freda Josephine McDonald in 1906 to a working-class family in St. Louis, Baker’s ambition to rise above her station in life was white hot and developed early on. Written and directed by Daryl D. Brooks, Black Pearl  follows a similar template of most of The Black Ensemble Theater’s productions, however this one sparkles like a diamond. To capture the larger than life personality of Josephine, two triple threat actresses were cast. Aerial Williams is simply dazzling as the younger Josephine, all legs and arms, with a million wattage smile. To portray Josephine as a “woman of a certain age,” Joan Ruffin conveyed class, charisma and confidence to winning results. 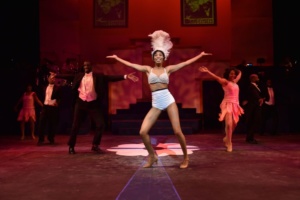 Josephine was born around the turn of the century to parents who were initially vaudeville performers. Settling in the St. Louis area, her Mother (Rhonda Preston) gave up her own dreams of being an entertainer to take care of her family as a washerwoman. Her father, drummer Eddie Carson, abandoned the responsibility of parenthood and walked out on them. As early as 8 years old, Josephine was tasked to work for abusive and cruel white families in order to help her mother provide. The ultimate knock-back, a wealthy white woman put her cigarette out on the young woman’s arm, forever scaring her as punishment. Running away from home and with no desire to look back, Josephine found work as a waitress and soon after as a dancer with the Dixie Steppers. This lead to her being cast as part of the ensemble in the original cast of Shuffle Along on Broadway. Not one to be relegated to the background, she caused problems with the other cast members, often usurping the lead while breaking character to demonstrate her signature comic touches during the Charleston. Quickly catching the eye of a casting director, Baker was next cast as the lead in “La Revue Negre” at the Theatre des Champs-Elysees in France. At the peak of Europe’s obsession with American jazz music, Baker quickly became the toast of the town. Highly sought after and handsomely paid, Baker enjoyed a very decadent public lifestyle. Multiple marriages, disposable lovers and all-consuming passions quickly ensued. This is when the United States came calling with a fantastic offer, return and headline The Ziegfeld Follies. Confident her homeland would welcome her back, Baker agreed to the tour, but not so subtle racism, sexism and hostility met her instantly upon her return. Columnist Walter Winchell (William Rowland) tried to kill her career through skewed and slanderous media reporting, his hostility based on the color of her skin, not her talents. Defeated and professionally humiliated, Baker went back to Europe where she was again welcomed as a luminary. 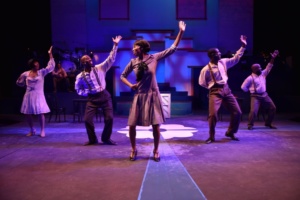 Taking place at the beginning of act two,  a recreation her most iconic work, The Folies Bergère banana skirt dance. Alexia Rutherford’s opulent costume design proved wholly sublime. Williams’ was raw, defiant yet utterly alluring, when recreating Baker’s routines. Knowing she was home in Europe, Baker radically redefined notions of race and gender through the performing arts and was well received for do so. This lead to the renouncement of her American citizenship, instead becoming a French nationalist in 1937. Baker even worked as a spy for the French resistance during World War II, hiding coded messages in her band’s sheet music and once, notoriously slipping documents in her underwear. Anything to help defeat the Nazi’s and bring an end to the second World War. Relocating her family from St. Louis to her chateaux in France after the War, Josephine’s next obsession became motherhood. She ended up adopting 12 multiracial and multinational children from around the world, colorfully nick-named her “rainbow tribe.” The very public adoptions demonstrated children from a multitude of ethnicities could get along, so Baker’s interests switched from performing to promoting civil rights in the United States. During the 1950’s and 1960’s Baker devoted herself to fighting segregation and racism in her homeland, insisting every venue she performed in have integrated audiences and the citizens equal protections under the law. Motherhood and racial equality consumed her time, so unfortunately the large amounts of money she commanded from her performances stopped rolling in. After another divorce, her lavish lifestyle and a multitude of children, her accounts were completely wiped out. Before losing her French chateaux in foreclosure, Baker received a personal invitation from Princess Grace to relocate with her entire family to Monaco. Still craving the spotlight, Baker once again returned to the stage in 1973 at Carnegie Hall. Openly overwhelmed and visibly weeping on stage, this New York comeback was a highly touted celebration. Sadly Baker passed on shortly after, dying quietly in her sleep. 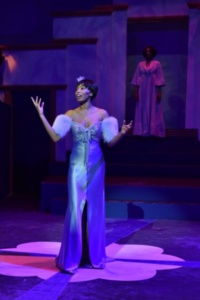 Set to a soundtrack of classic songs including “La Vie En Rose,” “My Way,” “Blue Skies” and  “I’m Just Wild About Harry,” musical director Robert Reddrick kept the pace fervently rolling. Aaron Quick’s background projection design featured dozens of photos of the real Josephine through all aspects of her wild existence. The first female International superstar of color, Josephine Baker was brought back to reputable and respectable life by The Black Ensemble Theater. I must admit, I am a true fan of this “Creole Goddess” as she was often called. I attended the opening with high expectations, and I am happy to report, they were both met and exceeded. Black Pearl was fun, flirty and fabulous from beginning to end. Black Ensemble newcomer Aerial Williams has an impressive future ahead of her based on this dynamite debut performance. Coco Chanel once famously remarked “In order to be irreplaceable, one must always be different.” Paving her own road, triumphing over her past and her country’s racist attitudes, Baker built a remarkable, unique and uncharted lifestyle for herself. I wondered what Baker herself would have thought about the Black Ensemble Theater’s treatment of her life story in Black Pearl: A Tribute to Josephine Baker?  I am confident she is a proud guardian angel, widely smiling and enthusiastically kicking up her heels over this entire production.