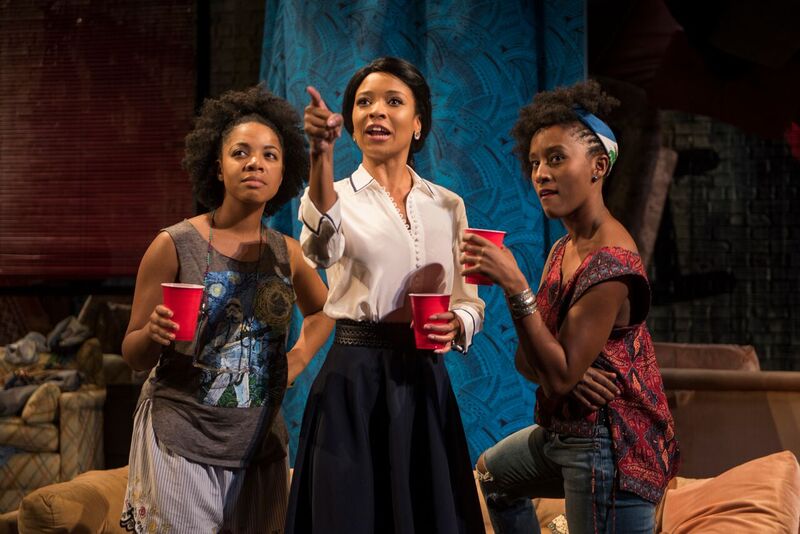 BLKS – You’ll Be Glad We’ve Got These Girls

BLKS – You’ll Be Glad We’ve Got These Girls 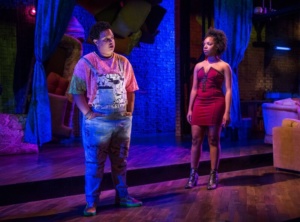 For five years in the mid-nineties, friendships could be defined by the four women at the center of the hit sitcom, Living Single. Queen Latifah, Kim Coles, Ericka Alexander and Kim Fields played a quartet of enterprising young African-American women, hilariously navigating their way through their troublesome twenties. The show’s addictive theme song anthem declaring “We are Living Single. In a nineties kind of world, I’m glad I’ve got my girls.” Fast forward to 2018 and writer Aziza Barnes latest tips it hat to that original quartet who personified Black Girl Magic. BLKSis making its raunchy yet rollicking world premiere at Steppenwolf. Yes, that Steppenwolf. Director Nataki Garrett’s orchestrates her highly likable ensemble with precision, mining outlandish laughs out of the dating dramas of a team of twenty-somethings.  While the story’s focus is squarely on young women of color, this surprisingly compelling tale of camaraderie and companionship will make your cheeks blush and your sides ache from laughter. 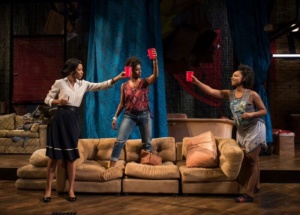 We all remember our early twenties. That time of self-discovery, filled with dating highly inappropriate people, drinking far too much, and wearing outrageous, attention seeking outfits. The women of BLKS are now negotiating that same perilous territory, albeit with much funnier results. We began our journey in the shared Brooklyn loft with Octavia (Nora Carroll) the sexually aggressive roommate, discovering a precarious mole on her neither regions, and her on-again/off-again, sparring partner girlfriend, Ry (Danielle Davis) who doesn’t handle that news so well. Then there is Imani (Celeste Cooper) a struggling, people pleasing performance artist, currently working to perfect her impression of an early Eddie Murphy’s stand up routine, done to help her connect with her father. Finally, enter June (Leea Ayers) an uptight corporate accountant, outraged by the fact her fiance is having an affair with a woman who has the unmitigated gall to drink red wine with her Popeye’s fried chicken boxed meal. How does June deal with this crisis of conscious, you may ask? By dressing up in a white, beaded, floor length cotillion gown of course.  All at personal crossroads in their lives, they unanimously decide there isn’t a problem that cannot be solved at the bottom of a bottle of booze and in the middle of the dance floor. 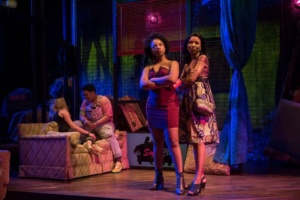 The shockingly raw, rapid-fire, take-no-prisoners realness of the dialog connects BLKS to a contemporary audience. It is impossible not to relate to at least one of these characters as they navigate a night of possibilities in New York City. From the drunken nightclub argument between Octavia, Ry and a character called That Bitch on the Couch (Kelly O’Sullivan) fighting over club level flirtations, to the street-side face slap, the situations might be heightened, but clearly based in reality. I defy anyone to not howl with laughter during act two’s daring, slow motion catfight. Think Dynasty or VH1’s Basketball Wives meets The Matrix. As each heroine discovers her own solid footing, ensemble member Namir Smallwood plays the remaining assortment the male characters crossing their paths, including an overconfident and endearing new beau, a cad and the Dominican dude guilty of the aforementioned face slap. 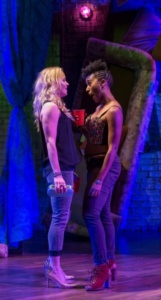 Of additional note, the imposing, oversized cushion filled set design of Sibyl Wickersheimer. No one will be “waiting to exhale” curling up alongside one of those. Trevor Bowen’s costuming was a mix of downtown funk, real world professional ready to wear, with one glitter dipped, glamorous exception. Marcus Doshi lighting impressed, chronically the action from dawn to dusk, living room to club. 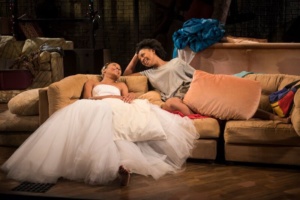 Rasean Davonte Johnson’s projections brought a grounding weight, particularity during the #blacklivesmatters moment towards the end of the proceedings.

Celebrating both friendship and frivolity, Aziza Barnes’s BLKS is an engaging and poignant new piece filled with a great deal of potential. The universal appeal of the characters made this a highly relatable, utterly enjoyable romp. The raw language and brief nudity may cause a few to giggle, but the rapid-fire dialog and earnestness of the ladies’ struggles truly connects. BLKS will chase away any winter blues, so see it with friends and enjoy the journey.

RossJune 23, 2022
Read More
Scroll for more
Tap
Kush Dhungana’s Poor Player Speaks To All Creative Artists Who Have Had Their Voice Muffled
APAP And You Are There Part 1