Pearl Cleage’s Blues For An Alabama Sky is set in Harlem in the 1930’s. A lot of the plays themes seem relevant for today. Guy (John-Andrew Morrison), a homosexual and flamboyant costume designer. He longs to be in Paris with Josephine Baker who promised to send for him and refuses to believe she will not keep her word. He lives on this dream as he sends her costume after costume. For Guy, Paris is a land of freedom, a life without fear to be his true self. At the beginning of the play he has rescued his cousin Angel (Alfie Fuller) a one time prostitute whose gangster boyfriend has not only married somebody else, but has canned her from the the Cotton Club where she was working. What she doesn’t know is that Guy quit in protest. The time is right after the Great Depression and jobs were scarce, people were homeless and living was by the skin of their teeth.

On this faithful night Alabama native Leland (Khiry Walker) helps Guy carry the inebriated Angel home. As next door neighbor Delia (Jasminn Johnson), and Sam (Sheldon Woodley), a doctor join in. These friends discuss a Delia’s beliefs in women’s reproductive rights over their own bodies and her her infatuation with the pastor Adam Clayton Powell, Sr. who founded the Abyssinian Baptist Church in Harlem. Delia is setting up a family planning clinic with the help of Margaret Sanger the founder of Planned Parenthood. Sam and Delia bond over shared values and start a romance.

Sam, Delia and Guy represent the changing face of America’s society, while Leland represents the religious morality, who oppose gay rights and women’s rights to choose. He wants to take care of Angel, but things come to a halt when Angel has Sam perform an illegal abortion. Angel is self absorbed and has only cared about the survival of Angel. In The end it is her downfall, for she can not break free.

The cast is uniquely well rounded with John-Andrew Morrison giving an impressive performance. It is hard to feel sorry for Alfie Fuller’s Angel, but that is due to the writing. Her own needs and survival, hurt anyone who loves her.

Director L.A. Williams keeps this play moving like a Sunday afternoon dinner. The show lingers on each moment like a blues chord ringing out the last discordant tone. Set designer You-Shin Chen has done well on such a small stage and Asa Benally’s period-inspired costumes are well done. Oona Curley’s lighting is like a character of it’s own and the original music by Lindsay Jones is nomination worthy.

Blues For An Alabama Sky was commissioned by and premiered in 1995 at the Alliance Theater in Atlanta. Keen Company production marks its NYC debut. 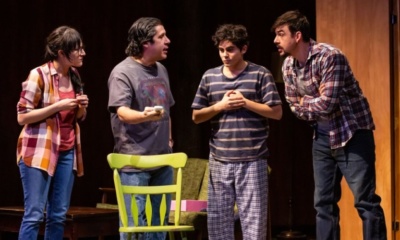