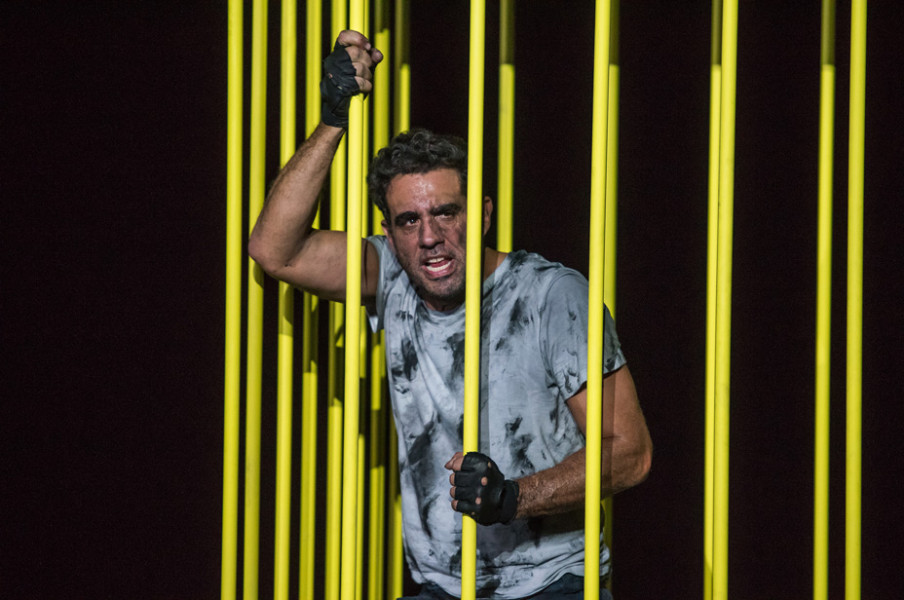 Bobby Cannavale Embodies The Hairy Ape In This Must See Production

Bobby Cannavale Embodies The Hairy Ape In This Must See Production 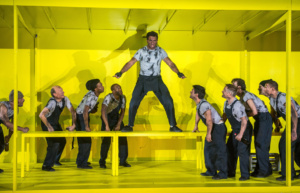 Darwin stated we came from apes and the powerful revival of Eugene O’Neill’s The Hairy Ape at The Park Avenue Armory makes a strong case for that conviction. Richard Jones’s brutal cinematic, stunning visuals and sublime acting make this production a must see. This is the theatrical event of the 2016-2017 season. 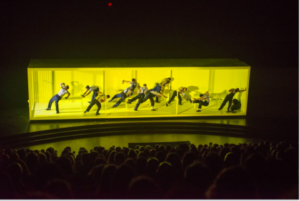 Tony-nominated Bobby Cannavale’s feral encompassing performance is memorizing. In a sense the show dares you not to watch and see the cages we put ourselves in. O’Neil kicks things into high gear as does Mr. Jones with the heightened reality between clases and how we think of ourselves. Written in 1922, this show is just as relevant, if not more so today. 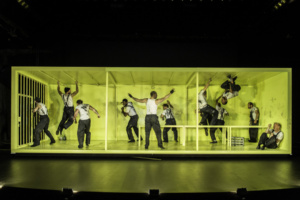 As you enter the space, it looks like a high school stadium or one side of a sports arena with tiers of yellow seats. You walk across a 55,000 square foot space to get to those. Surrounding the seats is a circular conveyor belt, where the eight scenes dizzyingly whirl past as the vast space also gets filled with action. The entire Armory space is utilized.

The Hairy Ape tells the story of a brutish, unthinking laborer Yank (Cannavale), searching for his sense of belonging in a world controlled by the rich. We first, meet Yank and his tribe as they stoke the engines of an ocean liner. Highly confident in his physical prowess over the ship’s engines and his men, Yank is in his element. When the arrogant daughter (Catherine Combs), of a rich industrialist in the steel business refers to him as a “filthy beast”, Yank undergoes a crisis of identity and starts to mental and physical deteriorate. He leaves the ship searching for this girl who has destroyed his confidence and ends up in Manhattan. Not belonging to the socialites on Fifth Avenue, nor with the labor organizers on the waterfront, Yank ends up at the zoo, where even the ape rejects him.

Cannavale embodies Yank in his brutish emotional journey to perfection; the rest of the cast supports him to the fullest. David Costabile as the eldest worker, who has past his prime, gives a moving monologue about the beauty of the sea, when sailing was spent out doors pulling rigs, not trapped inside stoking the fires. He shows a generation lost by the age of industrialism.

The staging by Jones, starts in a series of tableau’s. Each time the ship leaches forward the tableau snaps back like frames of a picture. It is jarring as each frame leads to how animalistic we really are.

Set and costume designer Stewart Laing has out done himself and is as much of a star as Cannavale and Jones. His balloon moon, cages and 1930’s movie set are spectacular. Simplistic yet so intense, this element is enhanced by Mimi Jordan Sherin, lighting and Sarah Anglis’s sound design. Aletta Collins, expressionistic choreography adds a modern twist and creates a dream like atmosphere.

This show though artistic in every way will punch you in the gut and leave you feeling changed. It is impossible to not be moved by this piece and that is what great theatre is about.

Suzanna BowlingJune 25, 2022
Read More
Scroll for more
Tap
How to Transcend a Happy Marriage or How To Forgive
Sally Struthers is Mrs. Peacock In Clue: On Stage