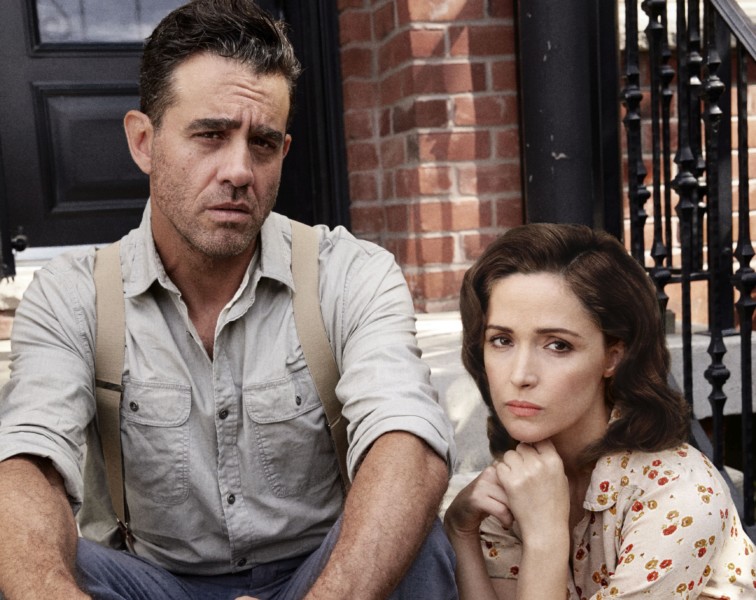 Fresh off the heels of their acclaimed starring roles in Medea at BAM, Bobby Cannvale and real-life partner Rose Byrne reunite on stage to perform in a special benefit reading of Arthur Miller’s classic, A View from the Bridge where they will play Miller’s emotionally torn Eddie and Beatrice Carbone in a benefit performance for The Acting Company.

Taking place in 1956 Brooklyn, longshoreman Eddie Carbone agrees to shelter his wife Beatrice’s Italian cousins, Marco and Rodolpho, who have arrived to work illegally. Trouble begins when Eddie’s niece Catherine becomes attracted to the charming Rodolpho. Familial love turns to obsession, and retribution ultimately leads to tragedy in Arthur Miller’s captivating tale of illicit desire. Complete casting and creative team details will be announced shortly. Cannavale and Byrne will reprise these roles for a full-scale production at Australia’s Sydney Theatre Company in December 2020.

“Bobby and Rose are the type of actor that members of The Acting Company aspire to be: actors who can play any kind of role. For them to support our mission of developing young actors by reading one of the great plays of the American theater is very meaningful.” says Artistic Director Ian Belknap.

Proceeds from this benefit reading will support the programs and productions of The Acting Company.

The Acting Company’s 2020 season will feature a two-show repertory performed Off-Broadway this summer at the Lucille Lortel Theater, as well as three titles in the Company’s popular John McDonald Salon Reading Series. Titles will be announced shortly. More information about The Acting Company may be found at www.theactingcompany.org.

Tickets are on sale to the general public Monday, February 24 at 12 PM via the Kaye Playhouse box office: 212.772.4448 or www.hunter.cuny.edu/kayeplayhouse
Price: $50-$250
Location: The Kaye Playhouse at Hunter College, 695 Park Avenue, 68thStreet between Park and Lexington Avenues, New York, NY 10065

Rose Byrne (Beatrice Carbone) is best known for her role as Ellen Parsons in FX’s Damages (opposite Glenn Close) for which she earned two Golden Globe nominations and one Emmy nomination. She is also known for her role in the Paul Feig-directed comedy, Bridesmaids alongside Kristen Wiig, Maya Rudolph, and Melissa McCarthy. The film was nominated for a Golden Globe Award for Best Motion Picture-Comedy and Musical-and a Screen Actors Guild Award for Outstanding Performance by a Cast in a Motion Picture. Byrne is currently in production for FX’s limited series, Mrs. America, where she stars as Gloria Steinem. The nine-episode series will premiere in 2020. Byrne currently stars in Paramount Pictures’ Like A Bossopposite Tiffany Haddish and Salma Hayek. Byrne voices the titular robot in the Netflix sci-fi thriller, I Am Mother, which premiered at the 2019 Sundance Film Festival. She was recently cast in Jon Stewart’s campaign trail comedy titled, Irresistible, opposite Steve Carell, and in Lexi, a new comedy by Jon Lucas and Scott Moore.

In 2016, Byrne returned to the stage in the Sydney Theatre Company’s production of David Mamet’s Speed-the-Plow. She made her Broadway debut in 2015 in the limited engagement run of You Can’t Take It with You, where she played the lead role of Alice Sycamore opposite James Earl Jones and Kristine Neilsen. She is currently appearing opposite her real-life partner Bobby Cannavale in Medea at BAM.

The Acting Company is the only professional theater principally dedicated to the development of the young classical actor. Founded in 1972 by Margot Harley and John Houseman from the first graduating class of the Drama Division of The Juilliard School, The Company has launched the careers of some 400 actors, including Kevin Kline, Patti LuPone, Dakin Matthews, David Schramm, Mary Lou Rosato, Lisa Banes, Derek Smith, Frances Conroy, Harriet Harris, Tom Hewitt, Kate Forbes, Henry Stram, Stephen DeRosa, Hamish Linklater, Jesse L. Martin, Roslyn Ruff, Andy Grotelueschen, Jeffrey Wright, and Kelley Curran, among numerous others. Through a rotating repertory of classical and new plays, the Company has given two generations of recent drama school graduates the opportunity to hone their craft by playing the most challenging roles to a range of audiences early in their careers. Alumni of The Acting Company have won every major acting award, including the Oscar, Tony, Olivier and Emmy. The Acting Company itself has been honored with numerous awards, including a special 2003 Tony for Excellence in Theater, and most recently was the recipient of the 2019 Audelco Award for Best Play for its production of Native Son. The Acting Company has been seen in 48 States, 10 foreign countries, on and Off-Broadway, and at leading resident theaters including the Guthrie, Kennedy Center and New York’s City Center. Among over a dozen new works commissioned to complement the classical repertory are plays by Tony Kushner, Marcus Gardley, Rebecca Gilman, David Grimm, John Guare, Jeffrey Hatcher, Beth Henley, Meg Miroshnik, David Mamet, Lynn Nottage, Ntozake Shange, Maria Irene Fornes, Charles Smith, Spalding Gray, Michael Weller, and Wendy Wasserstein. The Company’s education programs bring professional productions, in-school residencies, and teacher training workshops to more than 10,000 students in underserved schools and communities each year.

For more information about The Acting Company visit:
www.theactingcompany.org.