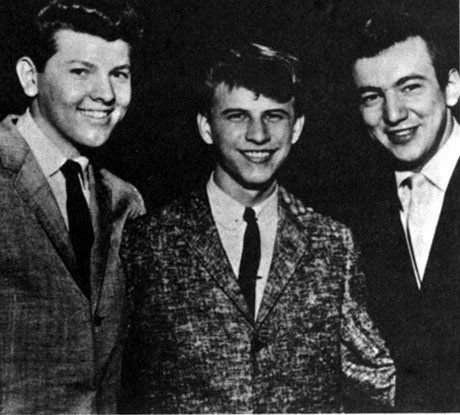 Join The Lambs in virtual conversation with Bobby Rydell on Tuesday August 18th at 7 PM.

Born Robert Ridarelli on April 26, 1942, in South Philadelphia, Bobby Rydell, showed his musical ability at an early age, playing drums professionally at the age of 9. He appeared on Dick Clark’s American Bandstand in 1959, and went on to sell more than 25 million records during his career. His most popular hits include “Kissin’ Time,” “Wild One” and “Volare.” In 2012, he underwent a double organ transplant, and was back performing six months later.

From a very early age, Bobby Rydell enjoyed emulating comedians and impersonators that he saw on television. Recognizing talent in his young son, Rydell’s father encouraged him to perform, and by age 5 Rydell was taking drum lessons. He made his professional debut at the age of 9 on Paul Whiteman’s TV Teen Club as the bandleader’s drummer, which he continued to do for the next three years. It was during this time that Whiteman changed Bobby’s last name to the less ethnic “Rydell.” As a teenager in the late ’50s, Rydell sat in with local dance band Rocco and the Saints, which included fellow future star Frankie Avalon. The group’s manager, Frankie Day, singled out Rydell for a career as a solo performer, and introduced him to record label executives. Not long after meeting executives he recorded his first single, “Fatty Fatty,” for Veko Records. He joined Cameo-Parkway Records in 1959, and his single “Kissin’ Time” became the first of his 19 Top 40 hits, according to Billboard magazine.
Rydell’s intense touring schedule was interrupted when, at 70, he underwent a liver and kidney transplant on July 9, 2012. His life was about to end when the generous family of a dying child saved eight lives by organ donation. He received 75 percent of a liver and one kidney. He underwent the operation at Thomas Jefferson University Hospital in Philadelphia, which lasted 20 hours. He returned to the stage in Las Vegas just six months after his operation. . And if that wasn’t enough — in 2013, Bobby underwent heart-bypass surgery.

Click above to purchase on Amazon, or
visit Bobby’s web site to purchase a signed copy of his book
www.BobbyRydell.com

Today Bobby is dedicated to public awareness, spreading the word to the world, in his travels, about the Gift of Life thru organ donation. Bobby works with many veterans groups. Now a seasoned performer, he continues to perform to sell out audiences throughout the world. As a reviewer of a recent performance put it, “Bobby Rydell is a true American music treasure.”

Hosting the conversation will be Lamb Foster Hirsch, noted film historian, author of 16 books on film, and professor of film at Brooklyn College.

Suzanna BowlingSeptember 23, 2020
Read More
Scroll for more
Tap
Join Daisy Joplin For a Magical Event
What To Watch Aug 13th To Take Away The Blues