Boesman and Lena Two Hours With a Couple Not Seen 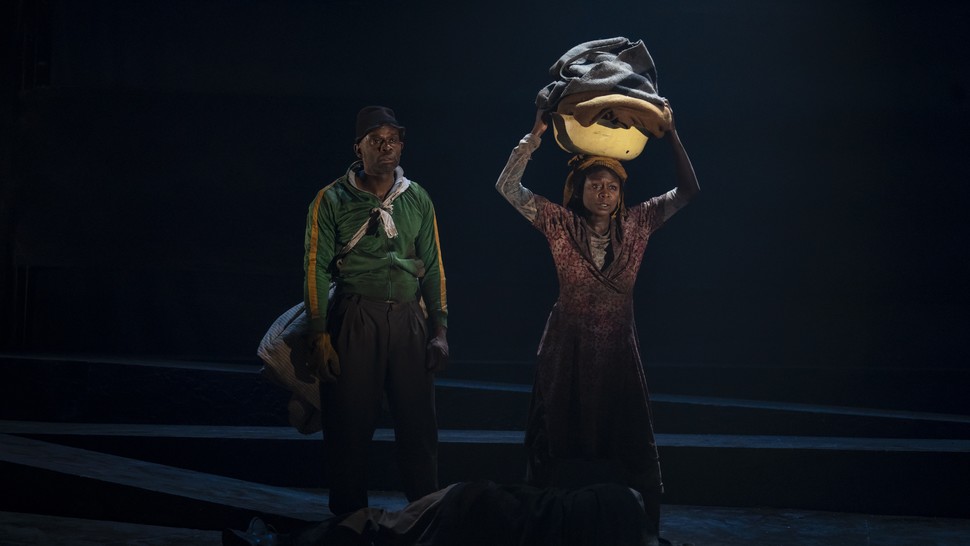 Boesman and Lena Two Hours With a Couple Not Seen

Susan Hilferty’s set (she also does the costumes), along with Amith Chandrashaker’s lights and Matt Hubbs’ sound design drop us onto a bleak and desolate landscape where life seems to have escaped. For the first 15 minutes we hear, then watch as two characters slowly enter from the back. They are laden like pack mules with pots and pansand all of their worldly goods. We have entered a world that South African playwright Athol Fugard has so often written about.

Written fifty years ago Boseman and Lena is meant to show the effects of Apartheid segregation and displacement. What it shows how differently men and women see life. Boseman (Sahr Ngaujah) longs for freedom and hits and blames those around him. He takes out his anger on those that he feels are less than him. Lena (Zainab Jah) just wants to be seen, be it a dog or an old man (Thomas Silcott) who does not speak the same language. She longs to connect to life and refuses to give up, yet in the end excepts the man who will eventually kill her.

The two have been displaced so many times Lena does not even know where she has come from. She states: “Blame the white man. Bulldozer!” Each has become a different side of how inhumane treatment can transform someones identity. Boseman becomes the abuser and Lena the hope.

The cast has a lot of lines that at times seem a little too high pitched or under breath but these are still wonderfully enriched characterizations.

Director Yaël Farber’s has you entrenched into their hellish world that seems no escaping from.

Displacement of anyone is horrific to contemplate and this play makes me incredibly happy, that so far it is nothing I have had to deal with. This play will make you grateful for you own life despite any troubles and compassionate for those who have lived this hell.

Suzanna BowlingApril 9, 2021
Read More
Scroll for more
Tap
Ain’t Too Proud – The Life and Times of The Temptations Offers Digtal Lottery and Student Rush
Lolita My Love or Confessions of a Pedophile