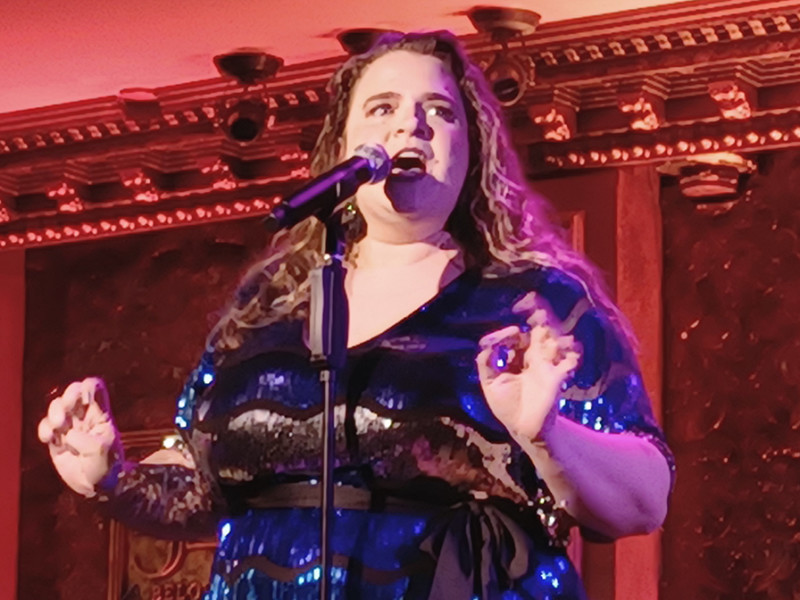 There’s just something irresistable about Bonnie Milligan. Maybe it is her self-effacing sense of humor, the warmth of her spirit, or her powerhouse belt.  But it doesn’t matter what her secret is. All that undeniable something drew a packed house to her final concert at Feinstein’s/54 Below on Sunday night.

She opened her show with a Latin infused rendition of “Raise the Roof” that threatened to bring down the basement ceiling with the cheers of her audience.

Most of her legion of adoring fans at Feinstein’/54 Below seemingly saw her debut Broadway performances as Princess Pamela in the Go-go’s musical, “Head Over Heels”, proving that royal beauty doesn’t have to come in a size two.  Cleary, Ms. Milligan is not a woman to be denied, as she affirmed by singing Sondheim’s “Everybody Says Don’t.”

As she cheerfully told us, she was delighted to be back from pretending her family home in Ohio was her favorite NYC karaoke place for the last year and a half.  Of course, It’s been a while anyway since she worked as a waitress at Landmarc Restaurant in the Time Warner Center, and only got to let loose vocally after work at Duet 53.

Behind all her deliberate casualness is a wickedly sly sense of humor. She had us all going when she claimed to have fallen in love while hiding from the pandemic in Ohio. Turns out she fell in love with Netfix, Hulu, “Golden Girls “, every season of “The Walking Dead,” and all of the Marvel superhero movies, in order, which she revealed with slides behind her as she sang a medley of “I Didn’t Know What Time It Was,” “Time After Time”, “Time Heals Everything” and “All By Myself”, bringing gales of empathetic laughter from her audience, most of whom have been equally housebound.

Ms. Milligan made no bones about having missed being onstage for all this time, comparing her love for the theater to “The Music That Makes Me Dance” and describing this year of isolation as equivalent to missing “The Man Who Got Away.”

After apologizing for too many ballads, she rolled out the cute and upbeat with her nod to the cheerfulness of Doris Day, and sang “Get Happy.”  She also tipped her cap to Cass Elliot singing “Make Your Own Kind of Music.”

Ms. Mulligan’s money notes are her soaring, wailing belts. Great as she is, at times it felt like sitting through a day of “Wicked” auditions.  Also, her voice isn’t as strong or full in her lower register, and when she was mixed behind the drums, as she seemed to be too often,  it didn’t help her.

However, her quieter moments were always filled with a powerful intimacy, as when she sang “She Used to Be Mine” from “Waitress.”

She was backed in her show by a talented all female band consisting of Meg Zervouils (piano/MD), Sherisse Rogers (bass) and Rosa Avila (drums).   They provided solid support for an evening enthusiastically and successfully celebrating Broadway girl power.